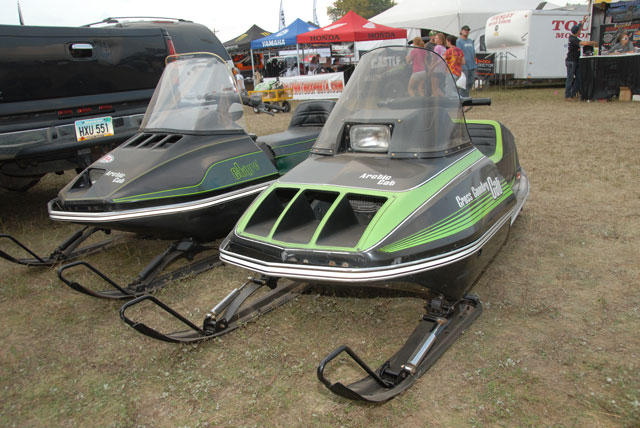 Yep, nice examples of Arctic Cat Cross-Country Cats like these have seemingly doubled in value over the past nine months. These two are owned by Pat Mach, grand poobah of the United States Cross-Country (USCC), whose own accumulation of classic Cats has had an impact on price.

Mach’s incorporation of these vintage-specific USCC XC racing rules for the 2011 I-500 has further fueled the fire. Why is Mach focusing on vintage XC rules? 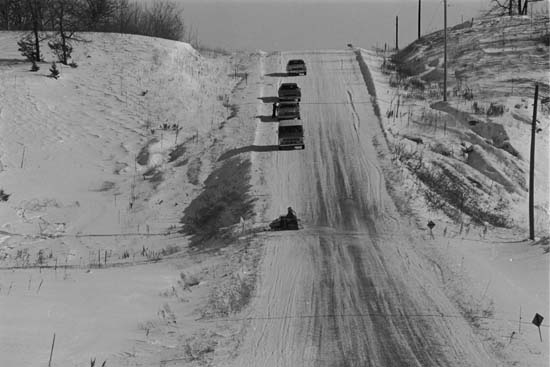 Because ex-racers like Brian Nelson, Jon Carlson, Aaron Scheele, Archie Simonson, Joey Hallstrom and others have been chomping at the bit to race vintage sleds in the upcoming I-500. Perhaps their hardcore, vintage battling during last season’s Ride With the Champs sparked a fire? Yep! 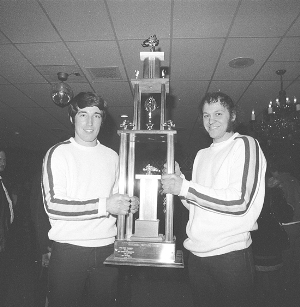 Regardless, the 1976 and ’78 I-500 champion, Brian Nelson (above, left) who has purches SIX 1979 Cross-Country Cats, so that he can build up two all-out race sleds. He even mentioned to me the notion of getting his friend Huber Fixsen (above, right) involved. Fixsen is one of the most creative engineers this sport has seen. Together these two were a MAJOR force in cross-country back in the day (as well as helping create the original ZR series of Cats).

How serious is Nelson? He’s training, has lost 15 lbs. and is aiming to drop another 10. I know Brian Nelson very well. When he gets serious about racing, look out! Lazer-focus. 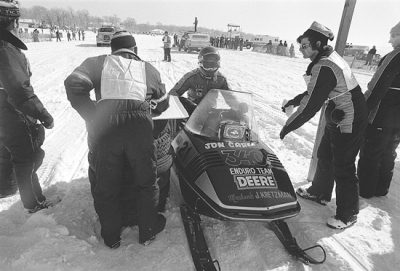 Meanwhile, Hallstrom and Carlson are rumored to be looking for vintage sleds. Wonder if Carlson is looking for a Deere?

And with the rumored return to Winnipeg for the 2012 I-500 XC, one can only imagine how more racers will show up on vintage machines. If vintage oval racing is any indication, there’s going to be a BIG revival in cross-country…aboard the legendary leafers.

I’ll have updates as they become available. In the meantime, is there anyone looking to sell a ’79 el Tigre (non-CC version)? I’m interested.