Mike Kloety is no stranger to the pages of ArcticInsider, as he’s been interviewed, quoted and praised as the successful Manager of Team Arctic’s Racing program many times during his career. Mike and I have been friends for quite some time, so I threw a few questions at him regarding Team Arctic’s race program this year.

AI: Mike, thank you for taking the time to talk to me and the fans of ArcticInsider.  There’s been a lot of changes take place at Arctic Cat over the past year, and one of them is the Team Arctic race program. As we are days away from the Duluth National Snocross opener, I know fans here have quite a few questions, and I’ve gathered a sample of them in hopes you can set the record straight. The first question is pretty open-ended, will Arctic Cat be racing this year?

MK: Before we jump in, I just want to say it’s great to hear from you! I know I’ve missed the stories on AI, so it’s great to have you involved again and bringing news back to our AC friends and fans.  First question is simple to answer, but gets way more in-depth and complicated from there. YES, we are going racing!

AI: Is it true the Team Arctic race program is smaller compared to other years?

MK: We had to make difficult decisions and cut back the amount of support offered versus years past.  We will continue to keep as many racers competing as possible. Overall, numbers will be similar to where they have been for the last few years but we will be down slightly on numbers mainly in the higher classes. Arctic Cat has always done a great job supporting new/young racers to keep racing fed with up-and-comers, so it’s not a shock when I see new names on race applications every season.

AI: Why did really good riders get let go like Daniel Benham and Trent Wittwer? Was that tough to see them go?

MK: We spent many years building our very competitive race team, supporting many classes in many different venues. Going into this season was an emotional one knowing we would have to make some tough decisions to maintain our new budget. Riders left to competitors because we couldn’t commit to them like we needed to. On top of that, our decision to forego building a new race sled troubled some whom either needed new sleds or didn’t want to race their current models. And to be honest, some riders left simply due to their feeling of uncertainty regarding these company changes. The good news is, we are still racing!

With successful sales programs like Snowmageddon and a great forecasted snow season, AC is headed in a new positive direction, and with that success, the race program should grow with that success next year. For me and others, there’s NO doubt it will be very difficult seeing some of our racers on other brands this season. I do wish them the best though, and my hope is they all continue to improve as racers. And maybe at some point we will get them back on Team Green. Going forward, we will focus on cultivating the new/young racers, and make sure the great group of racers we have are competitive.

MK: As I mentioned some very difficult choices had to be made and not building a 2020 ZR6000R SX was one of them. We had most of what would have been the new 2020 race sled laid out and tested by the end of the snow season this past Spring in preparation to build, but the deciding factor (not to build) had to do with the expense of it being a special purpose-built sled. The build numbers aren’t big and the cost to build is much higher than a production snowmobile, even if we utilize tooled production parts from other models. We knew we’d have to make huge (even bigger) sacrifices to the racing program just to meet the minimum build number needed to make this unit legal for racing. The writing was on the wall – we wouldn’t sell as many as we needed to build. So, you will see most racers competing on the 2018 and 2019 models ZR 6000 R SX sleds for this season.

AI: I agree AC has always done a great job of supporting new/young racers. With the recent introduction of the mid-sized Blast snowmobile from AC, will we see that model on the track this year? The Blast’s race-inspired looks seem like the perfect type of race sled for this group.

MK: We continue to have great success racing our transition snowmobiles like the ZR200 classes. Because the Blast isn’t in production yet, it’s still early to say if you’ll see it on the track(s) this season. I’m looking forward to spending more time with the Blast to see what it is capable of on a variety of terrain found on various race tracks. 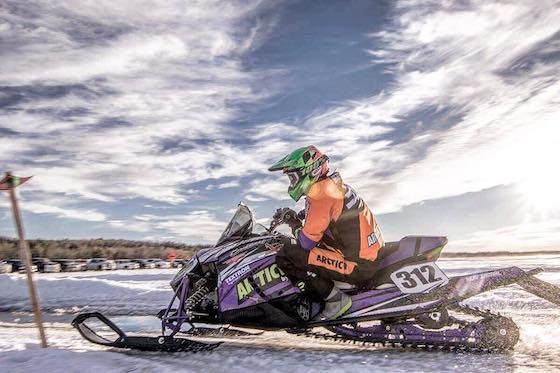 AI: What circuits will Team Arctic be focused on this year?

MK: We’re going to continue to support racers in all the venues and in as many classes as we can. With Snocross having the most limelight, but also being the most expensive to compete in, and without a new 2020 race sled you will see or hear about this venue taking the biggest hit in rider numbers at the top levels. There will be some changes in Cross Country but we have a very talented and deep team to work with there so I am planning on continuing that. Enduro racing, we have the top team in this venue coming back this season and we have some others we will be helping to continue our growth and competitiveness in this venue and with a new class there may be even more exciting racing news for Oval / Enduro in the near future. Our Hillclimb team has a solid group of veteran riders and a few up and coming young riders to make results interesting. Watercross and Grass Drags are over for the season but there were many racers flying our colors with great success and we will continue to support them. As I mentioned Oval racing has a new class starting, I wish we were in a position to support this more today but I am hopeful in the near future we can implement some of my vision and grow this venue.

AI: John Sandberg always ended his interviews by asking the interviewee to tell him a Roger Skime story. I’m going to ask you to leave us with a John Sandberg story.

MK: When it comes to telling stories about John, he leaves the door wide open! [laughs] The all-time best one occurred here at the race shop and you had a hand in it Kale! When John’s son Calvin was cross country racing, they purchased a new 500 Sno Pro. John made arrangements to pick it up one night during one of your road trip visits.

Unknown to John, I had the guys at the race shop take his snowmobile out of the crate, replace the contents with junk aluminum and plastic parts, spray paint “Sandberg” in big letters on the side of the crate, and then place it on the very top of three other race sled crates stacked in the back yard.

John got to the shop late after Roger tied him up at the plant telling stories, so he was all fired up hounding me to get his new sled uncrated and get to work setting it up. He followed me to the backyard as he wanted to video the whole process for ArcticInsider. I jumped into the enclosed cab of the forklift, pretended I was having issues operating it, pulled up to the stack to grab his crate, and when I pulled away, I tilted the forks down a bit and the crate came crashing down 10 feet to the ground landing upside down! The loose parts bouncing around inside sounded like it destroyed the snowmobile! I couldn’t keep a straight face, so I just drove away and Sandberg stood there horrified, arms out and yelling at me, “MIKE!!!!! WTF!!!!!?????”

You (Kale) and Selby were taking video of whole thing, and at this point uncontrollably laughing at Sandberg’s expense. I came back out, told John in a straight face I was sorry about that, and we should tip the crate over to see if it was ok…he went over, put some muscle into flipping it and realized after pushing, there was nothing inside!! [hearty laugh]. Knowing the joke was on him he yelled at us, “You guys are Awesome!!!!! Ya Got me!!!”  His sled was actually inside all set up waiting for him.

KW: My stomach hurt from laughing so hard that evening Mike! Best prank ever and thanks for sharing. I’m happy to hear Team Arctic isn’t disappearing and has a plan for the future.  I look forward to seeing you in Duluth, and wish the best for Team Arctic racers this year.

MK: Thanks again Kale for bringing AI back to life, I look forward to working with you again.