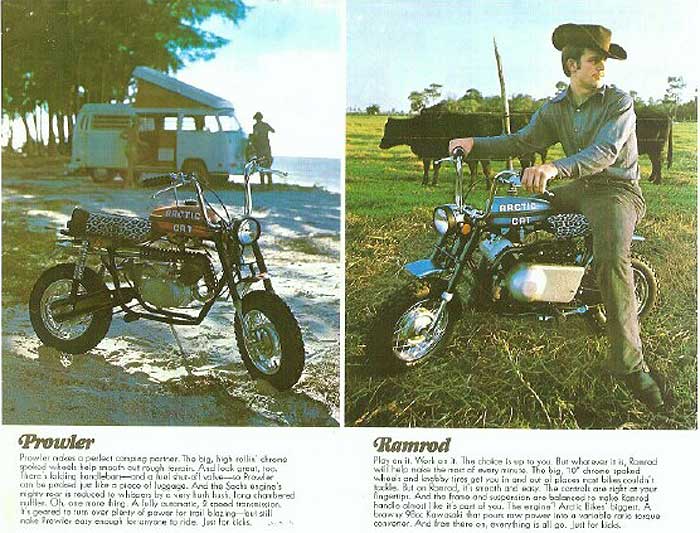 I’m not sure what I love more: The utterly cool style of the Arctic Cat minibikes, or that one of the model names was Ramrod.

They HAD to have laughed (a lot) about that one while sipping cocktails at the Legion after-hours, circa 1972.

While Ramrod brings out the Junior High mentality in me, the mere thought of Arctic Cat minibikes elicits memories of youth. Dang, I never owned an Arctic Cat minibike, but I did have a homemade version. And riding it always meant a mixture of fun, adventure and anxiety (the latter because we would poach private property trails where it wasn’t exactly legal to ride).

I remember the absolute joy of scraping together enough change to buy a gallon of gasoline. We’d ride to the gas-station on bicycles, fill up the one-gallon can, then ride home to fill up the tank. 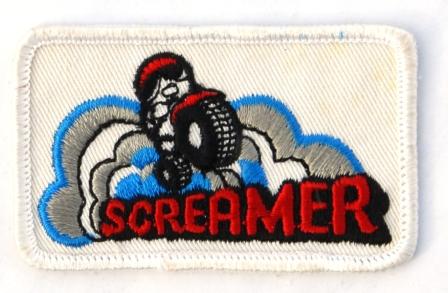 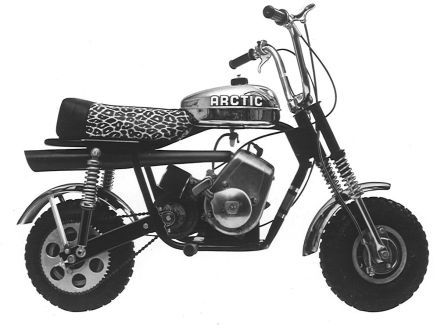 Screamer! The perfect name for a 134cc/8-hp minibike with 14-in. wheels and marginal brakes/suspension. At least buyers weren’t being duped at the time of purchase.

I suspect that when the Arctic Cat Marketing guys were putting together the marketing plan for the first year (1970) minibikes, that someone double-sneezed while typing on the IBM Selectric, and nobody caught the mistake. Thus the first model in the line was dubbed SSSCAT instead of SCAT.

But either way, was another name for “crap” really a good choice for a product name? 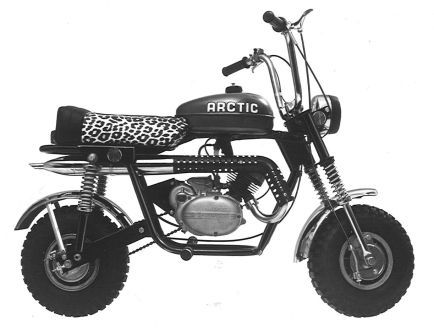 Contrary to popular opinion, the very first Arctic Cat Prowler was not a 1990 snowmobile, but rather this 1971 minibike with a 47cc Sachs engine and the coolest seat ever to grace a two-wheeled vehicle.

Arctic Cat offered minibikes from 1970-72, then conceded the category to more established brands. Still, of all the non-snowmobile products Arctic Enterprises offered in the 1970s, the minibikes seem the coolest to me. I’m personally on the prowl to find a nice condition green model this summer.

There will be lots of Arctic Cat minibikes at the 50th Anniversary shin-dig at the end of the month, perhaps even the two from Tom Rowland’s collection pictured above.

For a whole bunch more info on Arctic Cat minibikes, check out THIS SECTION from BossCatLegacy.com. 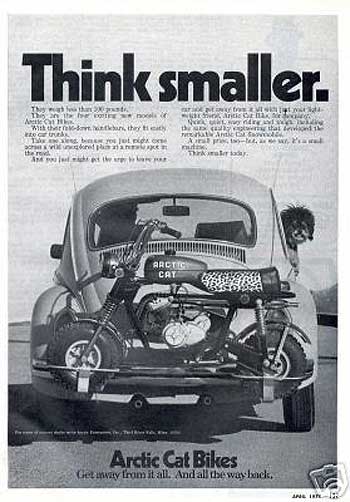