Project Nelson/CC Cats: “Everything is Better when Hubert is Around”

This past weekend, Brian Nelson was joined by his longtime friend and legendary mechanic/engineer, Hubert Fixsen. The cumulative knowledge of these two icons is staggering.

Fixsen was Nelson’s mechanic during their glory years of cross-country racing in the mid-to-late 1970s, at both John Deere and Team Arctic.

Fixsen has a brilliant engineering mind, and his contributions to Arctic Cat still reverberate through the sport.

He was one of the principle engineers for the original ZR, and has since consulted on many current and future snowmobile projects.

Fixsen never strayed too far from racing, playing an integral role in Jeremy Fyle’s outstanding success as a Team Arctic cross-country racer in the 1990s.

Soft spoken, thoughtful and undoubtedly a genius, Fixsen brings experience and creativity to any project he’s involved with.

So it was on this Sunday in December, with awe and the weight of history unfolding before my eyes, that I once again saw these two amazing minds work in concert with each other.

Fixsen had ridden his ZL 600 from his farm south of Willmar, to Nelson’s shop on Nest Lake in Spicer, Minn., for a few hours of testing and tinkering on the three ’79 Cross-Country el tigres that Nelson has built for the upcoming I-500.

These two guys were largely responsible for engineering the front and rear suspensions that defined the 1978 and ’79 CC el tigres. They grew up together, raced everything from cars to sleds together, and share vast knowledge and experience.

I highlighted the word “share” because the dynamic of these two talking, brainstorming and solving problems is truly amazing.

Like a couple who have been married for 50 years, these two know what the other is thinking by detecting body language or the “look” of the other’s eyes. They practically complete each other’s sentences.

Nelson has a remarkable “feel” for snowmobiles, and Fixsen has a mathmatician’s understanding of them, each complementing the other’s strengths.

Early in the day, when Nelson told Fixsen that the sleds felt as if they were geared such that they were going past the 1.2:1 overdrive, Fixsen crunched the numbers of rpm and gearing, confirming exactly what Nelson felt. Then a two minute, rapid-fire conversation ensued in which they compared various gear ratios and the consequences of using each (weighing everything from chain-wrap to gear strength), and arrived at a decision of what to use on the sleds.

For a bystander like me, it was a glimpse into their nearly four decades of experience shaping and informing their thoughts and solutions. It was a continuation of conversations they’d had literally hundreds of times before, and will likely have dozens of times again in the future. It was history repeating itself, and yet confidently marching forward. And it was cool beyond words. 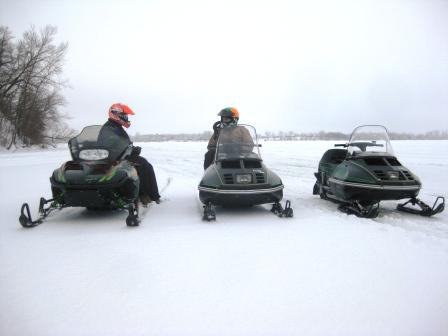 An hour or so of acceleration and speed testing the three sleds, on both hardpack (that Nelson had compacted with his Bearcat the day before) and untracked powder, mixed in with clutching and jetting changes, brought important gains for all three sleds.

Interestingly, a ’79 CC Cat accelerates quicker than Fixsen’s ZL 600, only giving up around 6 mph on the high end. And both agreed: the el tigre’s 30-40 hp deficit is made up for my its 100-lb. weight advantage.

With decades of racing experience embedded into their DNA, Fixsen and Nelson naturally (almost subconsciously) detect elements that need to be fixed or improved at every opportunity.

Fixsen hits his shin on a hood strap wire during one of the speed runs, and asks the question, “Won’t you hit your shins on those a lot during the race?”

He of course knows the answer, and he suggests a fix.

Nelson isn’t happy with the sleds’ tendency to pitch sideways under hard braking, and together they run through a list of suspension calibration fixes.

A broken rear idler wheel elicits discussion (see the lead photo, and the above photo) about whether it’s better to use the old aluminum mag wheels, or modern plastic wheels. There are pros and cons for either, and the decision is made to use aluminum wheels from ’94, but turned down to the OE diameter.

This is institutional knowledge at its finest. And watching the exchange of ideas and challenges each man offers to the other makes it plainly evident why these two won two I-500s, ICCSF Championships and brought the highest level of success to the Enduro Team Deere and Team Arctic cross-country programs 35 years ago.

After a few hours of testing and wrenching, Nelson and Fixsen were satisfied with the progress they’d made. It was time for Fixsen to ride home, and for Nelson and I to notch another 50 miles of ditch to prep our aging bodies for the 170 miles we’ll race in just more than three weeks.

Before we parted ways, Fixsen stated that he’d be at the starting line in Thief River Falls.

He’ll be there to see (and help) many of his good friends who will be competing aboard vintage and new snowmobiles, to witness the drama of a historic race unfold, and to participate in one of the greatest spectacles in the sport of snowmobile competition.

Like Nelson said to me a half-dozen times after Fixsen left, “Everything goes better when Hubert is around.”

Thanks for joining us last Sunday, Hubert. We really appreciate it.