For a handful of engineers at Arctic Cat, untold hours are spent drawing (on computer) new chassis, suspensions, steering systems and every other part/assembly on snowmobiles. After dreaming of one day working for Arctic Cat, Andy Beavis became one of these engineers back in 1998.

Now 36, married (and the father of a young girl) and bearing the title of Design Engineer, Mountain Team, Beavis was kind enough to answer a bunch of questions about his cool job. 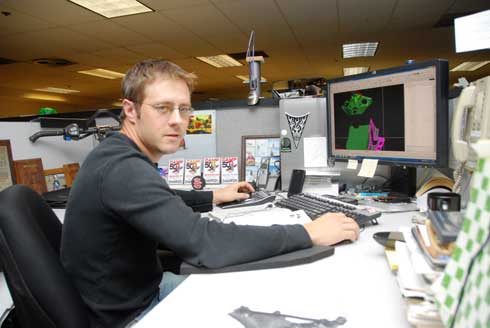 AI: Please explain what it is you actually do.

Beavis:  I spend most of my time designing parts and assemblies for the mountain snowmobiles using 3D CAD software. I focus on features and design that make the mountain machines unique from the other models.

AI: How much of your time is spent drawing on CAD, versus how much time you’re working in the shop with actual material?

Beavis: It varies greatly depending on where we are on a project. Early on I and others here with a similar job spend time riding, comparing our sleds to the competitors to experience the situation and help drive the direction of a new project. After that, I spend the majority of time on the CAD system doing layouts, overlays, and roughing out designs. Next we typically prototype the early design, followed by massaging the parts together in the shop and doing early testing. Then it’s back to the computer for refinement and/ or preparing the designs for production.

AI: What are some of the snowmobiles you’ve drawn as part of your job?

Beavis: I started working with Jason Howell at the end of the Powder Special era and we focused on making the Mountain Cats more specialized for the mountain consumer. My first project was the tapered tunnels on the 2000 Powder Special. Then we got busy with dropped and rolled chain cases, lightweight components, better rider ergonomics, longer tracks, track designs, King Cats, M Series and now the Pro Climb. The M Series was my first “ground up” project where I was involved in almost every aspect from day one because we had a small team dedicated to only that project. I had a lot of time invested in that platform.

AI: What was your role on the new ProClimb/ProCross sleds?

Beavis: I was involved in the early CAD layout work with Jon Edwards and Ken Fredrickson. John and I did a lot of research and layout on the ergonomics, while the three of us roughed-out the engine and component layout. This was a big challenge because we’re using three very different engine configurations. Even the 1100 N.A. is very different than the 1100 Turbo when it comes to  intake and exhaust routing.

We wanted the chassis to be mass-centralized, compact, balanced and easy to move around on. After the initial layout stuff, I focused on the tapered two-piece tunnel and mating to all the other components. I didn’t design a lot of the other components, but tried to provide input to some of the other designers from the mountain team’s perspective in areas such as ergonomics; deep snowmobility related to suspension and drive layout; cooling such as on the HCR; and the air intake systems.

Recently I have been working on accessories, including a vertical steering accessory for the 4-stroke engine packages.

AI: Do you have to look at a two-dimensional artist’s concept drawing, then actually draw on CAD a 3-D version of it? That sounds like it allows some interpretation on your part.

Beavis: I tend to work more on the mechanical side of the chassis and components as opposed to the exterior style and look. We do work closely with the stylists and plastics designers to try and ensure that the function is there such as ergonomics, air intake, cooling, and deep snow mobility to work with the style that they are after.

AI: What are the tools you work with on a daily basis and what are the greatest challenges of your job?

Beavis: The main tool I use is the Unigraphics CAD software. A working knowledge of all the fabrication tools and methods used to actually make the parts we design on the computer is just as important. Most of the designers here are experienced with many processes such as welding, tube bending, machining, sheet metal work, metal forming, metal castings, and plastics and rubber molding. In the early stages of a design we do a lot of our own in-house prototyping and fabrication with the guys in our engineering shops. The greatest challenge is often trying to figure out how to take something from a working one- off design and make it feasible to put through into a production environment. It might be fairly easy to make one of something but entirely different producing 300 a day.

AI: Is riding snowmobiles part of your job? How much riding are you able to do during a normal winter?

Beavis: Riding is a part of the job, but as a designer it is hard to spend large amounts of work hours in the field. I think that if someone is designing something that they should have very good first- hand experience in the area as opposed to just taking direction from someone else. I usually spend three weeks of the year at our western test facility, plus I try to fit in as much riding as I can on weekends and evenings with my friends from work or friends up in Canada.

When I have time for riding, I like to spend as much time as possible on our new product or competitor’s product to help give me direction in my job.

AI: What’s your all-time favorite Arctic Cat and why?

Beavis: Before I came to work at Arctic Cat, it was the first ZRs because they rather quickly put an end to the trash talking of our friends who were Polaris faithful back home. After coming to work at Arctic Cat it has been the M Series sleds, in particular the 2010 M8 because it represents to me the completion of the M Series project that I’d dedicated myself to beginning in 2002.

AI: Tell the story of how you met people from Arctic Cat, and how you eventually got your job.

Beavis: I grew up in Thompson, Manitoba, which is the end of the pavement heading 600-plus miles straight north of TRF. Winter there was skiing and snowmobiles.

We had a cabin on Paint Lake and spring time always brought the Polaris and Arctic Cat Factory trailers for late season testing. Because we had an Arctic Cat, we always hung around the Cat field test and engineering trailers.

Before the internet and all that, we always had a first look at the new models other people hadn’t even heard of yet. The guys were always upbeat, friendly, and helped us with any problems or questions we had about our Cats.

In the spring of 1992 they showed up with all these new ZRs and Thundercats, and that was it: My brother and I decided that we had to go work with these guys. We started asking questions and being a pain.

One spring, Don Magner from Field Test told me to go bother Roger Skime about a job, and I did. Roger was super friendly, and told me to give him a call when I got my degree.

Years later, after getting my degree, I tried for months to get a hold of him about a job, but never actually talked to him again until after I started working for Dennis Zulawski in Arctic Cat Engineering. I was surprised that he did actually remember me and my brother.

I was really excited those first few years getting to work with all these great guys I had met in Thompson and our racing hero’s at the factory. I remember talking to one of my friends from home after my first week at Cat. He wanted to know if I had met Kirk Hibbert. I was kind of cocky and proud when I told him, “Yeah, Kirk’s desk is just down from mine.” (Laughs)

AI: You were into racing too, right?

Beavis: It seemed that everyone was into racing back in Thompson. It didn’t matter if it was sanctioned or not, we were always racing somewhere. My brother got into cross-country racing while I was in college and then I got into it hardcore for a few years while I was working towards getting a job at Arctic Cat. After starting at Cat, I found it hard to dedicate the time required for racing while working long hours at the factory. As terrain racing was turning heavily towards Snocross, my passion turned towards mountain sleds.

AI: What part of your job gives you the greatest satisfaction?

Beavis: Definitely from working towards an improvement or a new design, and then finally seeing it in the field and having other people experience it and get excited about it.

AI: How come when I set up a shot of engineers for the 50th book (above), you turned your back on me so that nobody can see your face? That was kind of rude.

Beavis: Well, I was not aware that you were taking my picture at that time. As I remember it, we were trying to have a discussion about the new ProCross/ProClimb sleds and you were climbing around on top of desks and cubicles like a monkey taking pictures.

Beavis: I remember one time a few years back, a bunch of us from Arctic Cat went to West Yellowstone for the week between Christmas and New Years to get some riding in. All the wives/girlfriends joined us and did their best to make it through the days riding with Jason Howell as our guide.

We barely made it back in time to get ready for the New Years Eve party, but that night Roger showed up all dressed-up and ready to shake a leg on the dance floor. He made sure to take each of the ladies for a good spin around the dance floor before ducking out early to bed about 10pm so he’d be ready for riding the next day. Even years later he still throws comments in there about West Yellowstone and how so-and-so’s girl, “Really enjoyed dancing with ol’ Roger more than with them.” (Laughter)