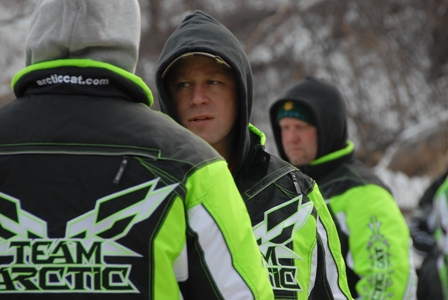 For the past two years, Mike Kloety has held the title of Team Arctic Race Manager. Prior to becoming Race Manager, Kloety has served several roles in the Race Department going back to 1994. Following a long line of successful managers before him, Kloety has managed the team by focusing on the big Pro wins as well as building a program that serves all levels of racers in all forms of competition.

We asked him some questions, he gave us the answers.

AI: I know you probably wear 12 different hats on any given day, but in a nutshell, what is your job as Team Arctic Race Manager?

MK: I like to think my job is to help promote excitement about racing Arctic Cat Snowmobiles, helping new racers get started and keeping them racing and enjoying the sport. It’s my job to create a successful program, which means top finishes, as well as a program that helps promote and sell our products.

AI: Do you pick which racers will be on the team?

Yes, but it’s a collaborative effort that involves our current stakeholders, and of course negotiation with the racers themselves.

AI: In your opinion, what were the highlights of this past race season for Team Arctic?

MK: The single events are easy: the X games, I-500 XC race and the Soo I-500 Enduro, not necessarily in that order. The very successful launch of our Sno Pro 500 into Cross-Country racing was also exciting for me. With as much racing as AC is involved in I could go on and on but for sure these areas seem to get the most recognition and for good reasons they are the Super Bowls of their venues. 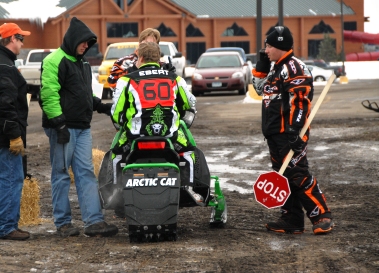 Kloety (left, wearing green), was one of the first to congratulate Dan Ebert for winning the I-500.

AI: Were there any disappointments?

MK: Over my 16-plus years of working in the Team Arctic race program I’ve trained myself to not get too high on the good stuff and or too low on the bad stuff, because you get plenty of each in racing. The one disappointment that I still talk about is also on my highlight list and that is the I-500 XC race when we had an issue with some tracks that took out some of our top racers, which was more frustrating than disappointing as it came out of now where to blind-side everyone.

AI: To you and to the Team Arctic program, is it more important to win individual races, or to win Championships?

MK: This depends on the circumstances. In a perfect world all the top racers would be competing at all the big events. You get me a racer that can win at the X games and then win both 500 mile races and maybe an Eagle River oval win and top it off with the king of the hill title at Jackson, and that racer to me is a true snowmobile racing Champion. And those accomplishments would overshadow any one venue’s point title.

In most cases a point’s championship is the whole book and the individual races are the chapters that make up the book. And sometimes the championship title doesn’t tell the whole story [Such as in the Pro snocross classes, where Tucker Hibbert is undoubtedly the fastest racer but doesn’t compete the entire season and thus loses the championship. –Editor].

I have had a conversation before with racers and their parents, as there are times when you have to sacrifice chasing the points of a National series if it’s going to break their budget and prevent them from racing other regional events that might be just as important to their program.

AI: Is the success of the Team Arctic program based on Pro class wins, or wins in the other classes?

MK: To some the Pro class maybe everything as it gets the most hype so you need to have a good group of racers and teams in there, but to me I look into the lower classes to get a feel of the competitiveness of our sleds, evaluate our ability to communicate information to those racers and to see if we have good up and coming talent racing our product. If we answer “yes” to those questions, then we are being successful and I hope it shows the next spring with more race applications coming in.

AI: What is the snowmobile racing industry doing well at, and what are areas it needs to improve?

MK: It’s better than ever at offering race-ready equipment. We try hard to offer our race customer exactly what he wants, just like we do with sleds for our customers who trail ride or mountain ride. We have race affiliates that are trying to reach out to new people and generate new race fans by going to new race sites. The one area that is high on the list to improve would be the cost of going racing, because it’s getting too expensive.

AI: If you had a magic wand and could transform the snowmobile racing industry with a wave of the hand, what would you do?

MK: It’s difficult to pick one thing, but one area would be to attract support from companies outside of the snowmobile industry to help ease the financial burden of the race affiliates and the manufactures, which in turn should help more racers.

AI: What are some of the biggest myths you deal with as Race Manager?

MK: I think we have done a better job with communication but there are still some that find it hard to believe that Tucker’s sleds are built just like everyone else’s and there is nothing done to them that can’t be done by anyone else He just happens to have one of the greatest snowmobile minds ever working on his sleds, his dad Kirk.

Another myth is the idea that bigger teams are better. Sure there are some benefits to working and racing with a big team but there are also a few drawbacks, and at the end of the day driver talent will still come out on top. With today’s sleds being so competitive out of the box there are no magic clutch kits or set ups that give you 5 miles an hour or 10 sleds lengths, we have some very talented people working for us that spend all day working for an extra ski tip or half a sled length jump to the first corner. There are no magic set-ups that will give anyone a huge advantage.

AI: For the past few years Arctic Cat has continued to support cross-country racing in a much larger manner than the other brands. Has this been a tough decision for you, knowing that doing so comes at the expense of having an equal-sized snocross program?

MK: No, and to be real honest there was a time a handful of years ago that a new guy in our Marketing department made a comment to put all our apples in one basket and do it second to none. In my eyes this would have been a disaster and luckily I was not the only one to think this way. We found ways to keep Arctic Cat somewhat involved in as many forms as we could.

Like all forms of racing, Cross-country has its issues to deal with and work around and is very dependent on Mother Nature, but I feel when things are going well this form of racing most directly relates to the majority of our customers, and I feel that is a really important reason to be involved in XC racing. 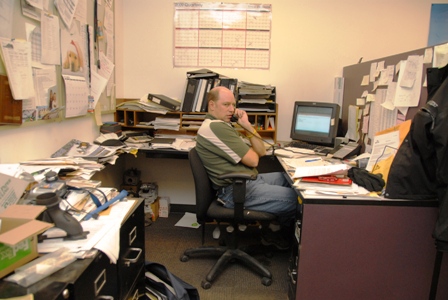 Kloety has two offices…one is wherever the race is on the weekends, the other is this place. There’s usually a phone glued to his ear at both.

AI: This is the time of year often referred to as the “silly season,” when racers are negotiating with teams and possibly switching brands. Should fans of Team Arctic expect any big moves either to or away from the brand?

MK: These times are more fun when the business is stronger. It is just too early to tell but I can say that it will be my goal to keep all our key players and teams racing. There are some areas in racing that we would like to have a stronger presence and unfortunately to do this will most likely require robbing from Peter to pay Paul.

AI: Should Team Arctic racers expect significant changes to the Sno Pro 600 race sled for 2011? In what area(s) does it need improvement?

MK: Our race platform has and always will be put under a microscope from the day it comes off the line to the last minute when the productions parts are ordered. The passion of the people here is second to none, and to them any change is significant if it could mean the difference from winning and losing. Our 2011 race sled will look the same on the outside but will be even better prepared for another season of racing on the inside.

AI: You attend most of the biggest races each year, what are your favorite events and why?

MK: For sure starting off the race season at Duluth is cool to see the new sleds and racers for the first time in race trim. It has a big crowd and great race atmosphere. Then on the other end of the season we have Lake Geneva, the best racetrack of the year along with the nicest weather make it a great race to be a part of. Throw in tight point battles and the fact that all manufactures have their next year’s product on display make this a must do event.

For the racer in me I would hate to miss the I-500 mile XC race. There is nothing like it if you are involved in some manner. For sure this event is never over until it’s over and things happen to change the outcome so fast it is just crazy. One year Roger Skime and I were watching and listening to the last day of the race from the warm confines of one of Arctic Cat’s black secret-service-looking sub’s and we went from being a few minutes behind the leader with 30 miles or to go, to then look like we would win the race, and finally DNF in less than a span of about 5 minutes. Talk about an emotional rollercoaster!