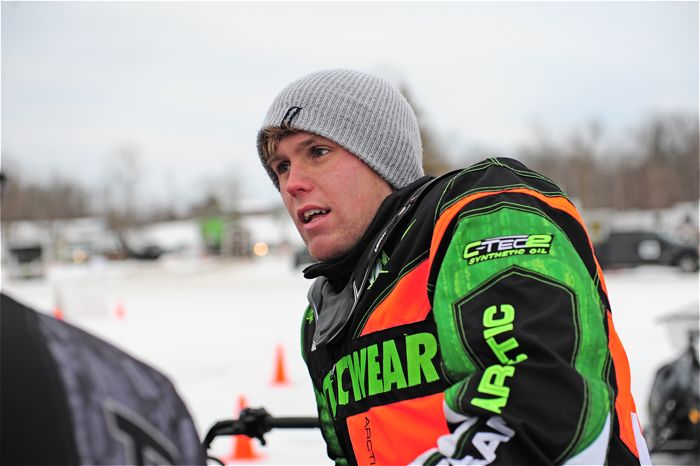 Since he burst onto the cross-country scene a handful of years ago, Zach Herfindahl of Eagle River, Wis., has been a veritable juggernaut of speed and success, notching wins at most venues and claiming multiple USXC championship titles along the way.

At the ripe old age of…(wait for it)…20, Zach heads into the 2017 season poised for continued success. This year he paused his college career in order to concentrate on racing full-time. He’s fitter, smarter and presumably faster than ever.

I chatted with the reigning Pro Stock champ about the season, his new Arctic Cat ZR 6000R XC race sled and what he eats for dinner with housemate Logan Christian.

AI: Zach, we’re a week out from the USXC cross-country season opener on Pine Lake. What were you doing today and this past week to get ready?

Herfindahl: Today I was doing some clutch testing with Jeremy Houle and Ron Gilland from Speedwerx, working on the stocker. We rode all day yesterday and until lunch today, trying to get a little more speed and acceleration out of it. We were working on the ditch sled because our ice sleds aren’t built yet. We found a little bit, but nothing too significant compared to the out-of-the-box calibration.

AI: How much play riding have you been doing, and how much testing or riding on your race sled(s)?

Herfindahl: I spent a week before Christmas in Wyoming, on a new Supercharger M Series sled that I built up with Speedwerx. I also spent a few days at our cabin in Michigan, and then I’ve been riding ditches around Fertile (Minnesota, home base for Christian Brothers Racing) for a few days.

It’s pretty awesome up here now. The ditches here are full, which is great. This is the first year for in the four that I’ve lived here during the race season that I’ve been able to ride around here. It’s a good sign, and I hope it means we’ll be able to have the I-500 cross-country.

I’ve been riding with Hunter Houle, who’s going to college in Moorehead. Jake Yurk rode one day. And sometimes I’ll go out by myself. When I’m by myself it’s about ¾ speed, nothing too crazy. When I have other people we’ll pick up the pace. Usually I’ll ride for about 50 miles or so.

Herfindahl: It feels pretty similar. I’ve been running it stock and it handles decent. But I’ll do some different stuff to my race sled. I prefer air shocks on the skis instead of coil-over shocks, so we’ll switch to those. Plus I like a stiffer shock package, so we’ll re-valve the skid shocks to be stiffer.

What I notice about the new sled is the fit and finish, and how nice and easy it is to pop off the panels. It’s a nice upgrade. In the ditch the sled feels like last year’s sled: I can hold it wide open and it stay’s straight. It’s been like that since 2015 when we went to EFI and stock chassis. It’s an awesome sled. 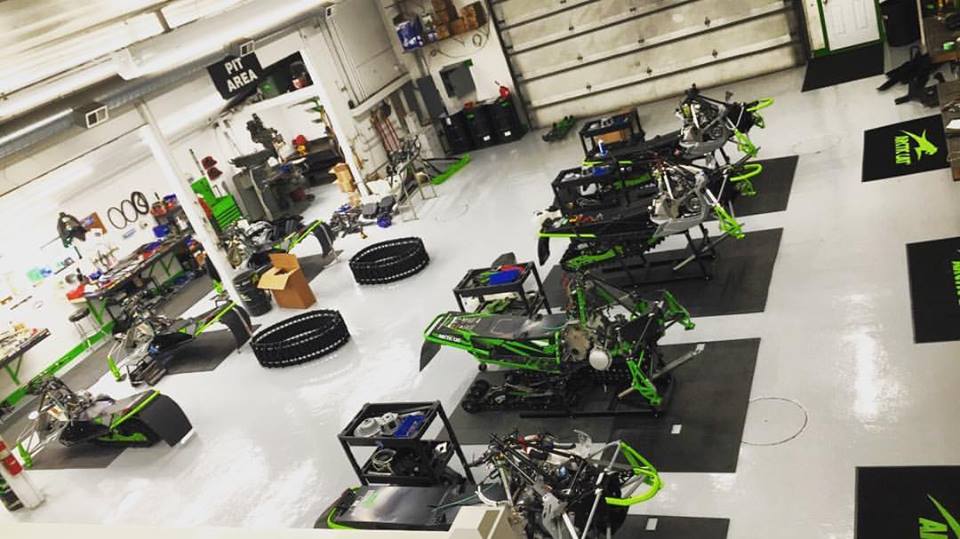 AI: Are Hector and Cory [Zach’s mechanics] building up a new Mod sled for this season?

Herfindahl: Yep, just one for the ice races. We’re in the process of building it, just waiting on a few pieces. It’s a similar mod as last year, built on the snocross chassis with a Speedwerx mod motor. It will come together next week, just in time for Pine Lake.

We’ll also build another sled for the Soo this year. Actually, w have a leftover of one of the Arctic Cat Soo sleds that were built for last year. We’ll make a few tweaks to it, but it’s pretty much the same sled that we ran last year. 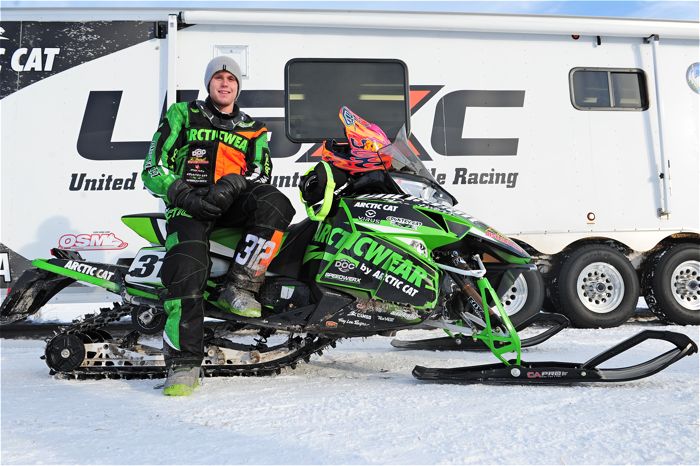 AI: As the defending Pro Stock champ, what are your goals for this season?

Herfindahl: Pretty much the same as always: I want to win as many races as possible, plus the championship. My biggest goal is to finish the Soo, which I haven’t done yet. Winning that is the biggest thing on my list…[pause]… I don’t know; it’s hard to compare that goal to winning the I-600 XC. I want to win both, but we’ve struggled at Soo the past couple years so it seems like it’s more of a goal. We try winning every one we can. Each race we go 100 percent, without trying to save something for a championship. If we win races we’ll win the championship. 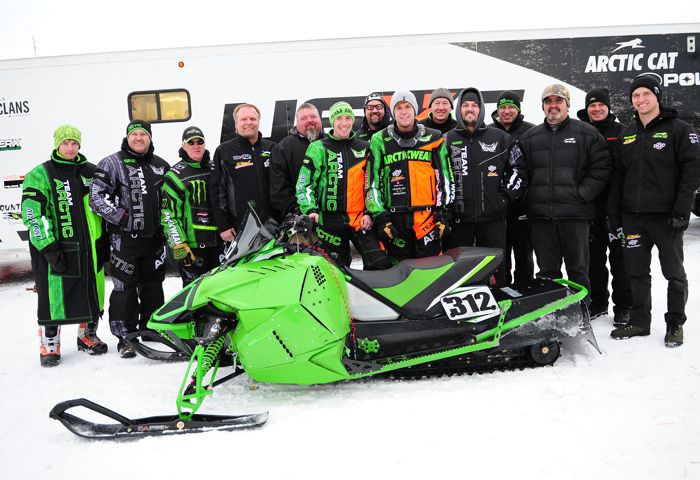 Herfindahl: Well, it’s a big goal like I said, but I don’t yet have afor sure partner. Ryan Simons was going to do it, but just this week something changed with his business so that isn’t going to work out for him to race with me. So we’re still searching for a second driver. With Wes Selby hurt [Wes broke his arm at the Colorado ISOC snocross], there’s a possibility that Brian Dick and I will be together if Wes isn’t healed up in time.

My plan this year is the same as last year, which is to do 400 of the 500 laps, just enough rest to get a few breaks to gobble up some food and drink something.

I want to finish it so bad. Last year my partner [Brady Dyrdahl] and I wrecked out. Two years ago, when Wes and Brian won, I made it to around lap 250 or so.

AI: Any other events or races?

Herfindahl: Probably not. I raced a little snocross last year, but decided against it this year because it’s just 10 minutes of track time then sitting around for the rest of the day.

I considered doing the Jackson Hole hillclimb, but decided to just go play riding instead. 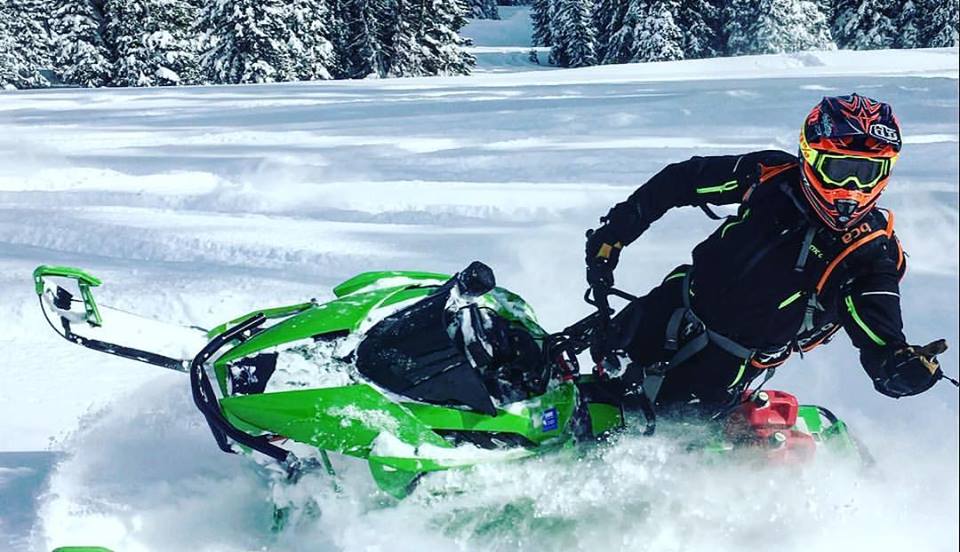 AI: That’s pretty cool. It seems like you still love riding and playing around on snowmobiles like you did before racing became your career. Is that accurate?

Herfindahl: For sure, I like to ride as much as I can. I love riding back home in the Eagle River area, through the hills and trees. And I love riding a mountain sled, either in Michigan or out west. I still enjoy that as much as I enjoy racing.

But the play riding is going to be on hold for awhile now: Starting next weekend we race every weekend straight into mid-March. It’s pretty hectic. So when that period is over I want to just go play riding. 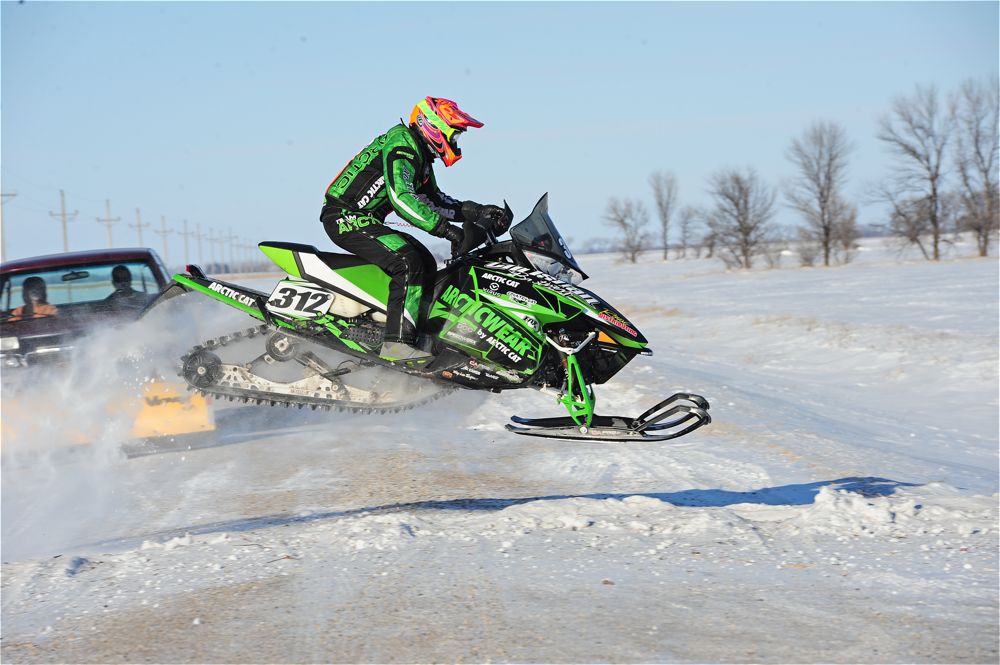 AI: That’s cool. Describe your day-to-day life during the race season. Where do you live and what do you do?

Herfindahl: I live with Logan Christian at his house in Fertile. Usually Monday through Wednesday is shop time, working all day and into the night. Thursday I clean up and load the trailer, then get ready for us to head out first thing on Friday. Friday we drive to the race, which most of them are located in this part of the state, then we unload and test all afternoon. Saturday and Sunday are race days, and we drive back to the shop on Sunday night.

That’s the usual schedule, although there are some stretches where we go straight from race-to-race, without going back to Fertile. That happens around the Soo 500.

I have great sponsors who make all this possible for me: Arctic Cat, Arcticwear, Country Cat, AMG Peterbilt, Royal Distributing; Doc, Speedwerx and of course Christian Brothers Racing. 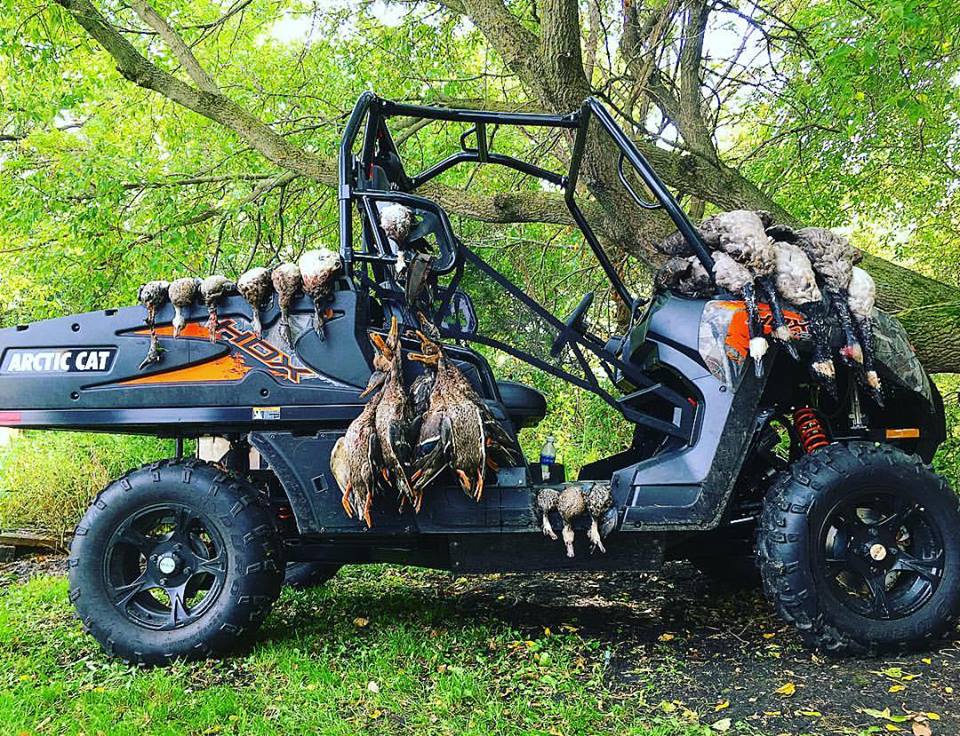 AI: When you’re back in Fertile during the week and living with Logan, are you guys living like slobs and eating frozen pizza all the time or is it a little more civil?

Herfindahl: Hahaha, we’re pretty civil actually. We cook some pretty good meals and eat much better than you would expect. We’re pretty healthy.

Herfindahl: Probably spaghetti squash…that’s our favorite and we eat it all the time. I make a lot of jerky from the waterfowl I hunted during the fall, but it seems like Logan consumes most of that.

I’ll shoot some geese and grill them up once in awhile. I didn’t take a deer this year, but Logan finally did so we’ll eat some venison.

AI: What do you mean he “finally did?”

Herfindahl: My first two weeks here we hunted every day. Logan isn’t a very good shot. (Laughter) I think he missed three deer. I didn’t shoot one this year because I’m waiting for a monster buck. 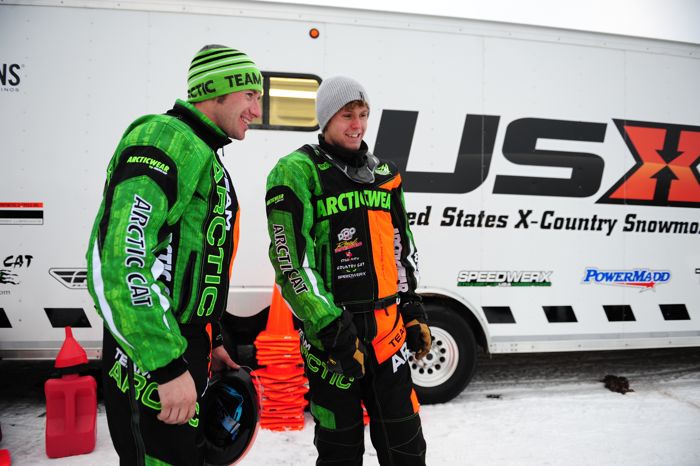 AI: Funny! Who do you count as your toughest competition this year?

AI: Last year at the Thief River Falls 300, you two battled nose-to-tail for two days. Was it as hairy as it looked?

Herfindahl: It didn’t feel as crazy as it looked, I always felt in control. That was both of us going all-out. We were going the same speed for most of the race, pushing it to the limit and maybe a little over. After 300 miles it came down to the wire, I was able to get around him a couple miles before the finish, but we were still nose-to-tail. The sleds were working so great and we were having fun.

Herfindahl: He was at the shop for a couple days this week…[pause]…there’s nobody who wants to win more than Roger. We’ll have an issue with something and he’ll want to do everything possible to find a solution. He’s always totally positive and everything he does is to try and make our sleds better. That’s an amazing mindset to have around us. To work with him is so humbling. We’re so lucky to have him.

AI: Amen to that Zach! Hey, thanks for the chat and  best of luck next weekend and this season. 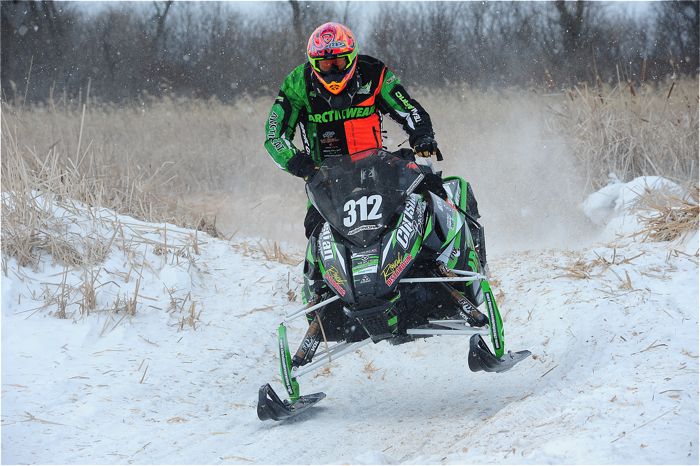 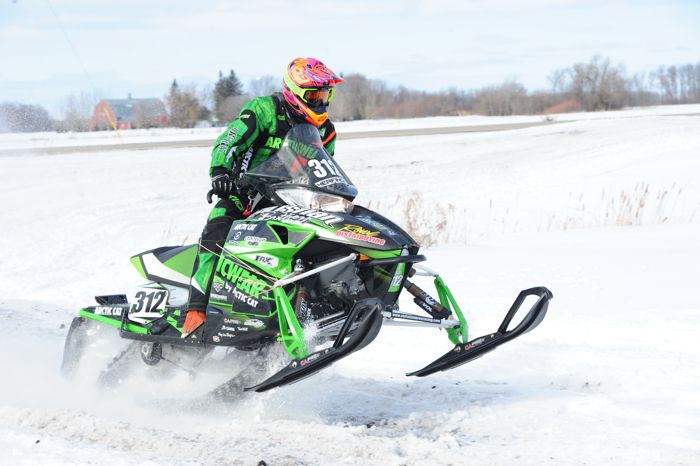 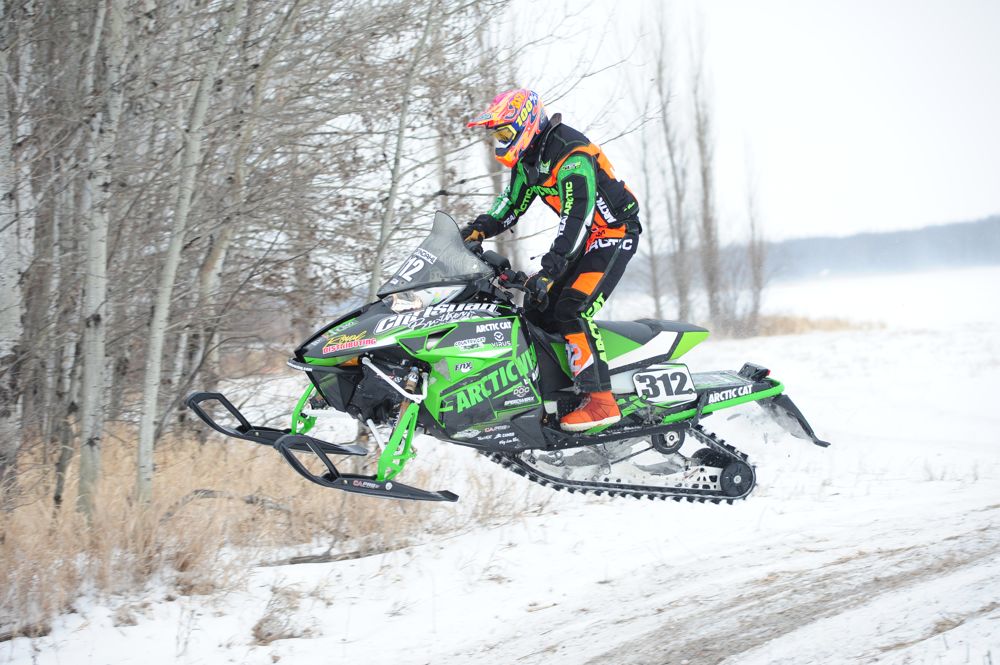 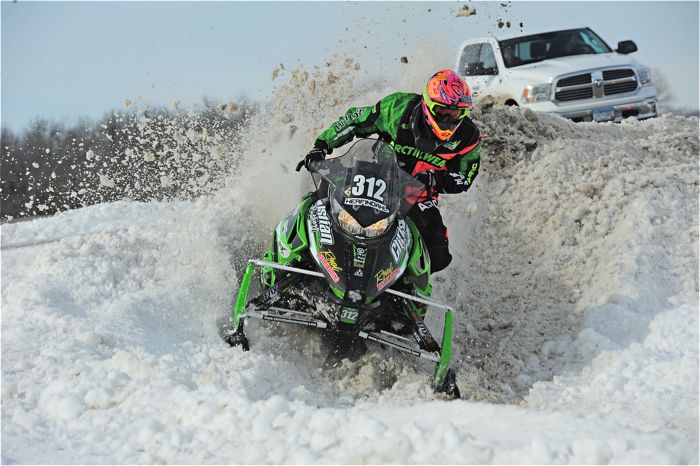 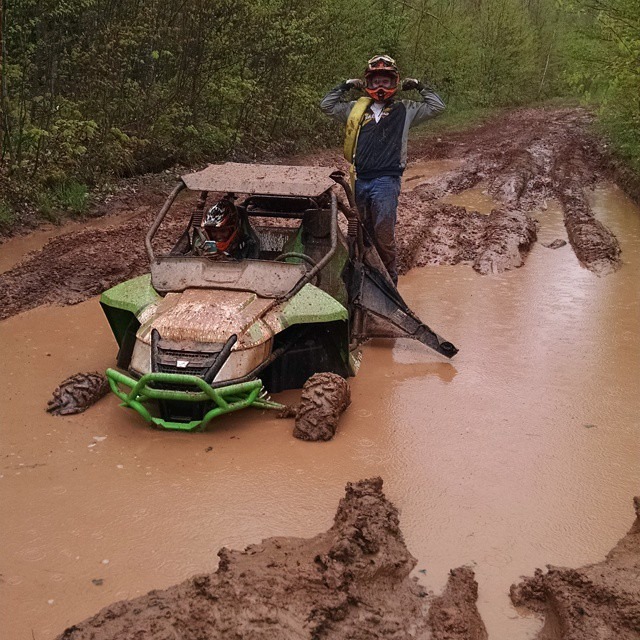 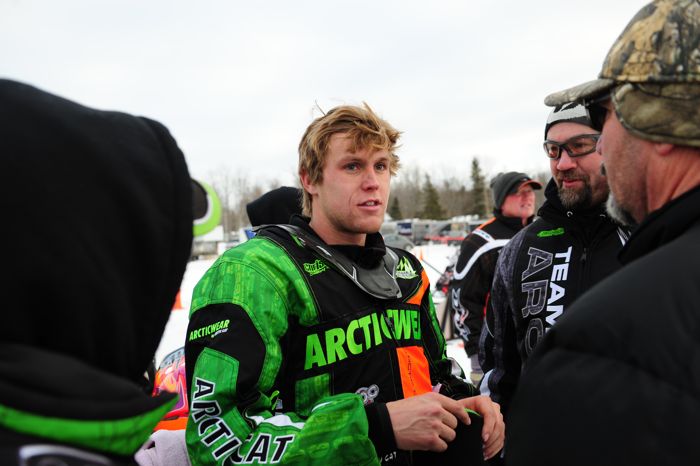