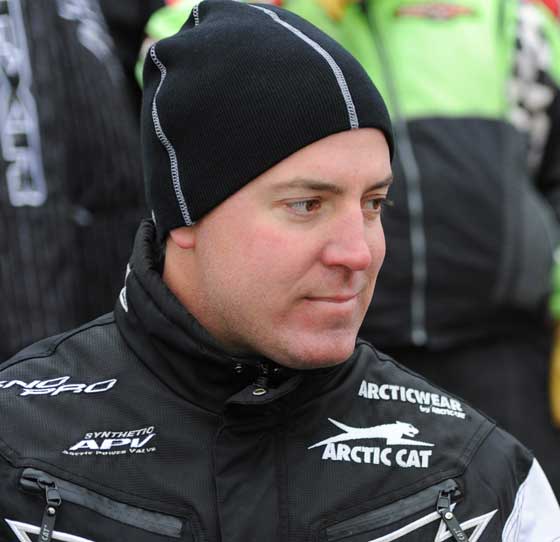 On Sunday, Team Arctic racer (and Arctic Cat engineer) Brian Dick scored the win in Pro 600 at the season-opening USCC cross-country in Pine Lake, Minn. The win capped a powerful showing by all Team Arctic racers and confirmed that the new Sno Pro 600 race sled is a force to be reckoned with in cross-country.

I talked with Brian after the very successful weekend.

AI: Congratulations on the big win at Pine Lake! What’s your opinion of how the race went?

Dick: good. The sled worked well, I rode a clean race without any major mistakes. There were a few corners where I came in too hot and drifted into the ice berms, but no real blown corners. Racing for 10 laps on a 10-mile lake course is pretty new for me and new for this circuit, but given the lack of snow, it turned out to be a great race that made the best out of an imperfect circumstance. 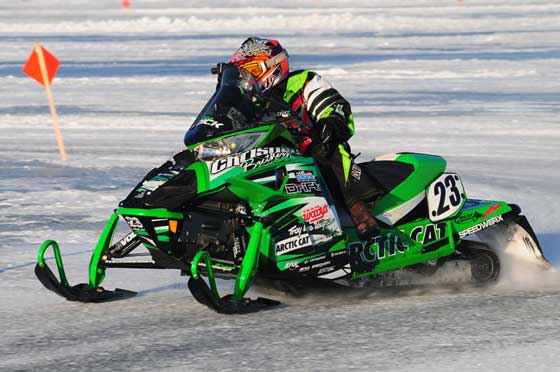 AI: If I recall correctly, you haven’t done much ice racing previous to this weekend, correct?

Dick: Not really. I’ve raced the Soo 500 enduro a couple times, plus a few ice lemans races over the years, but that’s about it. I really like it, always felt like I was halfway decent at it, like during the river sections of races like the I-500. It’s fun racing, especially when your sled works well. And my sled was working well this weekend.

AI: How much testing were you able to do prior to the Sunday race?

Dick: We put in three days of testing with over the Holiday break. It was with Rick Strobel and the Fox Racing Shox crew, and Steve Houle with Speedwerx. We did that test session to develop the baseline calibration set-up that the Team Arctic Race Department gave everyone. That’s how I had my sled setup at the beginning of the weekend.

Last week I was in Alaska for three days, preparing for the upcoming Iron Dog race by putting on some miles. I rode 150-200 miles each of the three days – it wasn’t ice running but it still helped – then I returned to Thief River Falls on Friday. I did some testing on Saturday with my teammates Ryan Simons and D.J. Ekre, and made some more adjustments to the sled… basically tightening up the front arm travel a little more to get some more ski pressure.

So as far as how much ice testing I had prior to this race, it was those three days around Christmas and then on Saturday.

AI: What’s different about the set-up for an ice cross-country compared to a regular course of ditches and river?

Dick: Basically you suck the sled down by putting spacers in shocks to get it closer to the ground. The idea is to lower the center-of-gravity so that you can corner fast and hard at high speed, without getting much inside ski lift. We also run more studs and more carbide on the skis, so that it stays hooked up well on the ice.

For the race my sled had 150 sharpened studs and eight inch carbide runners on the skis. During Saturday’s testing and again after the Pro Open race on Sunday, the things I changed compared to the published set-up was I took a little more travel out of the front arm, pulled some of the wheels out of the rear suspension in hopes of getting a little more speed, and made a slight change to the clutch set-up for a little more speed. 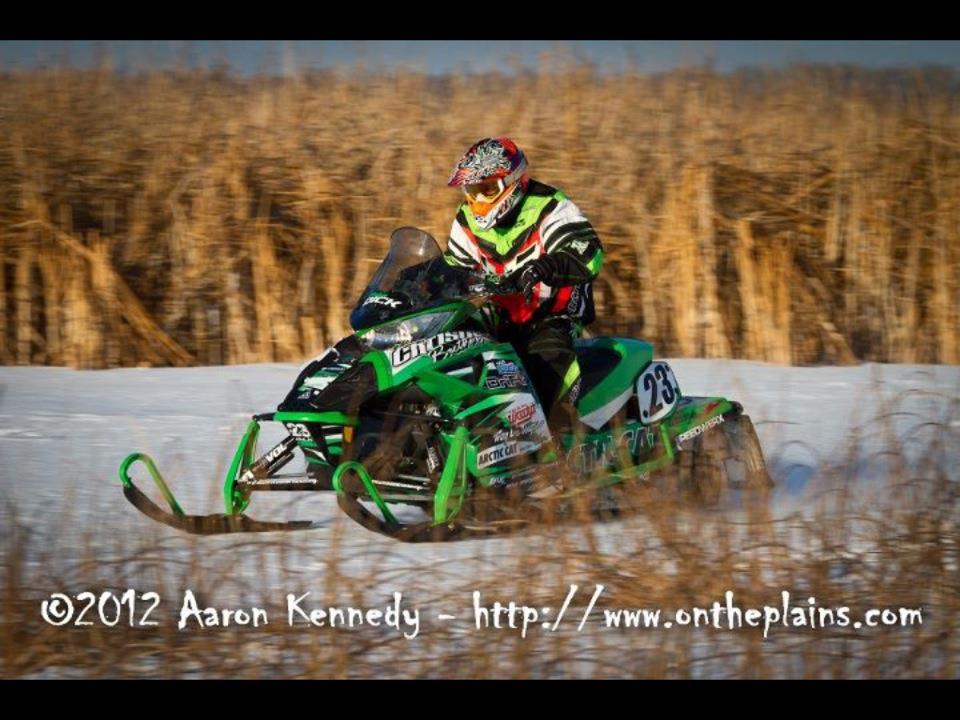 AI: It’s your job to help create the Sno Pro 600 race sled and make it a winner. Based on the results this weekend in cross-country, are you happy?

Dick: I’m very happy. We didn’t see any problems this weekend. There were no durability issues. Ice racing like this can be really tough on brakes, but ours’ worked excellent. I went over my whole sled after the race and everything was tight on it, just as it should be. There were no belt issues…really the sled did great.

Even better was that the other racers really liked the sled. Jordan Torgerson won both Semi Pro classes on it and Arctic Cat took five of the top-10 places in the Pro 600 class. My own experience out there was the same as the feedback we got from other racers that the sled worked great. It was predictable and comfortable. And there’s still more to be gained.

So overall I’d say that’s a great first race for a new sled. Plus when we finally get some snow and get back into the ditches, I think everyone will be even more pleased.

AI: Are you learning stuff about the sled and finding areas for improvement, whether it’s in calibration or actual design?

Dick: Absolutely. We always learn something about the sled at every race, and that’s especially true for a new machine at the first event of the season. We saw that play out in snocross, and the same is true for cross-country. We’re going to get it to work even better.

AI: I noticed you have a unique windshield on your sled. What’s the story on that…is it good for another 10 mph?

Dick: (Laughs). I also had a front bumper that nobody else had (More laughs). Yeah, it’s a new windshield that we just got tooled up, and more are being made. Basically it has a little more protection than the stock shield and it’s clear, so you can see through it even when you’re tucked down behind it. Think of it as a mid- or tall-XC shield. The plan is for it to be available in greater quantities by the next race in Detroit Lakes (on Jan. 12-29 –Ed.)

AI: What does the rest of your season look like?

Dick: My next race is the USCC event in Detroit Lakes. From there we go to the Soo 500, where we’re teaming up with Gary Moyle. That should be fun.

Then it’s up to Alaska in mid-February to take on the Iron Dog with my dad (Paul). That conflicts with the rescheduled Red Lake I-500 (which Brian is the defending champion –Ed.), which is a bummer.

After I return from the Iron Dog I’ll finish out the USCC schedule.

AI: It sounds like you have great support for your racing effort.

Dick: I sure do. Joe Lesmeister is my ace mechanic, and I also get great help from the rest of the Christian Bros crew. Plus I have great sponsors: Arctic Cat, Christian Bros. Racing, Speedwerx, Ericco Tool, Woody’s and Fox Racing Shox. I’m pretty darn lucky to have such great support.