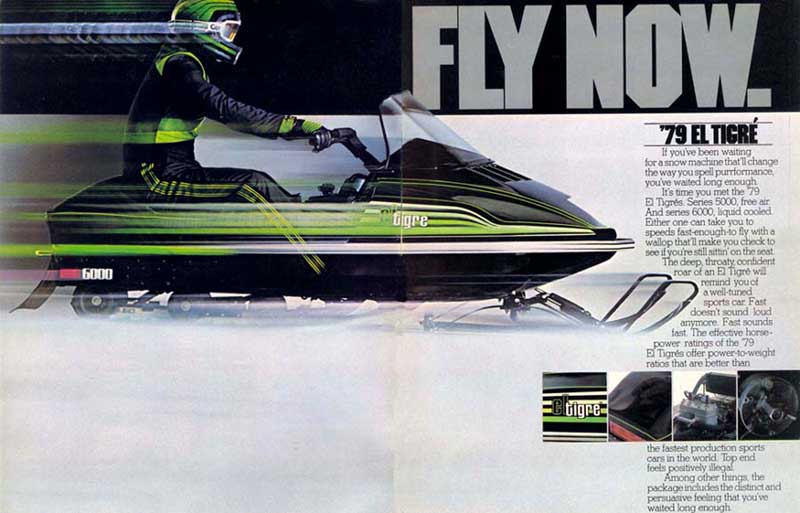 How many people besides me poured over this ad when splashed onto the snowmobile magazines back in 1978-79? As a youngster then, I both dreamed of riding an El Tigre, yet was intimidated by what I imagined was its ungodly power.

All those memories of youthful fascination with snowmobiles are part of the reason I love vintage sleds so dang much, and which is why I love the WOBLE ride from my house to Waconia during vintage weekend. 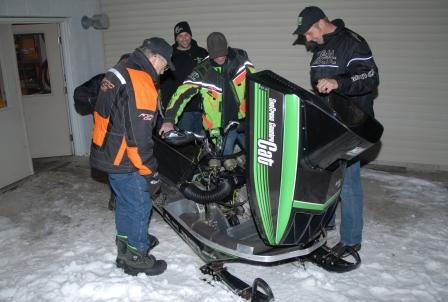 Getting ready for the 35-mile ride to Waconia is full of joy and laughter, especially the night before, when a cadre of sled heads congregate at my house. Inevitably, we have to spend some time working on sleds. Actually, working on KDub’s sled. 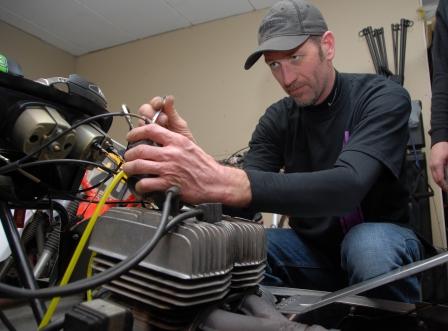 Yep, it wouldn’t be a night-before-WOBLE without Aaron Scheele performing a carb overhaul on KDub’s SnoCross-Country Pantera Custom. 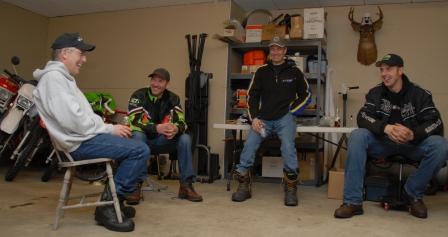 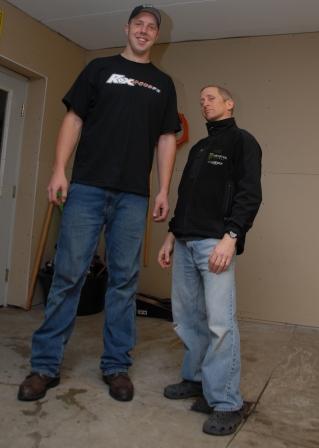 It’s likely they were laughing at how short I am compared to Eric. 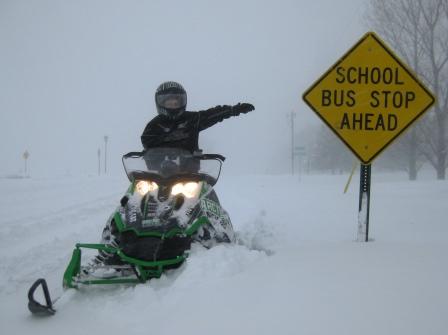 Speaking of short, check out the short-appearing sign my son Cal is pointing at in the ditch by our house. I shot that pic last December, during one of the several storms that blanketed Minnesota. 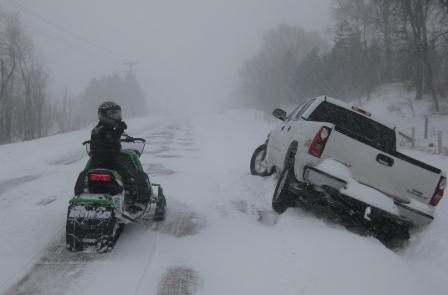 So much snow fell in a short period of time, that Cal and I rode on the roads (yes, on them) throughout the Prior Lake area. At first Cal was nervous that we were doing something illegal. We were, of course, but it was one of those days when the plows were parked and only a few die-hards (or goofballs, you pick) were driving.

The guy who dove into this ditch was not happy. 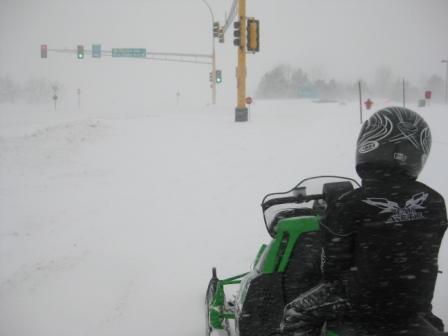 We stopped and helped a couple people get unstuck. Funny, I drove through the above intersection this morning, and it didn’t look anything like this. 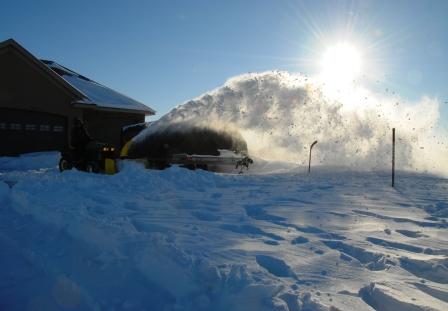 It snowed all that day. The next morning the sun broke out and so did the snow blowers. 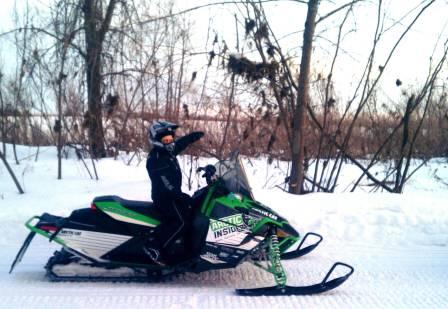 Later last winter Cal and I were riding on the Minnesota River trail between Shakopee and Belle Plain, Minn. Along the way, we stopped so I could snap this photo of him pointing at the grass clumps lodged in the trees, visual evidence of the prior year’s flooding.

With all the snow we received in the winter of 2010-11, this spring brought even more flooding to this area. I wonder how high the grass clumps will be the next time we ride down there? 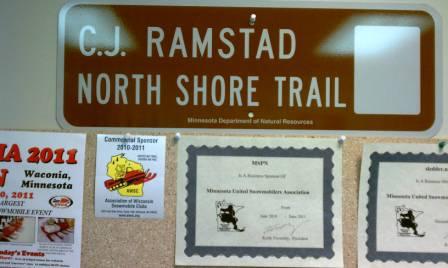 Years ago C.J. compiled his Pappy columns into a book called The Collected Works of Pappy. In that book, C.J.’s intro was a story about a young man who was riding a snowmobile  through a river bottoms area and happened upon Pappy, the curmudgeonly snowmobile guru who knows everything about sleds and life. It’s one of my favorite pieces of C.J.’s writing, and worth finding the book if you don’t already have it.

I shot the above photo a month or so ago, when I was at the MSPN offices. 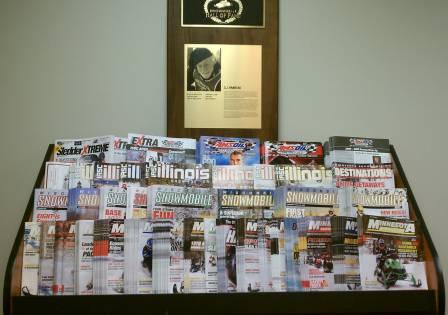 C.J. and his bro-in-law Joel ran that publishing company. After C.J. died in May 2007, Joel has “run the ship,” and done a fine job despite the terrible loss. The magazine rack illustrates all of the titles they produce. Cool! 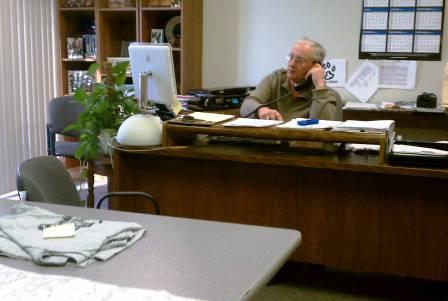 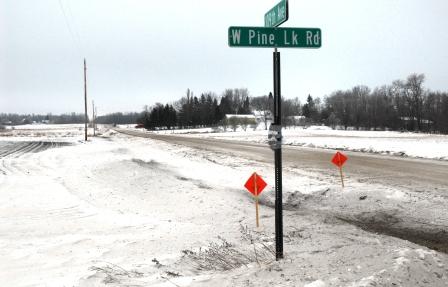 The last few photos for today are about cross-country and USCC. The first (above) is a shot I snapped along the course of the USCC Pine Lake race during the 2008 season. Though it’s hard to see, there is a pair of goggles taped to the Pine Lake Rd. sign, placed there by some clever racer who anticipated visibility problems during the race. 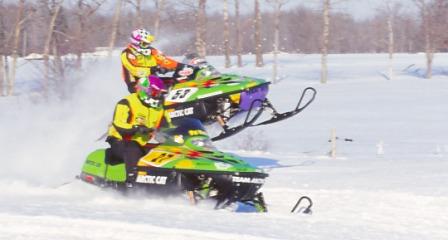 Speaking of USCC, how about this photo of circuit founder, Pat Mach (foreground), dicing with Brad Pake during the 1999 Warroad I-500?! I ran across it the other day, which made me smile. I only wished I’d found it and sent it to Pat before he’d passed. 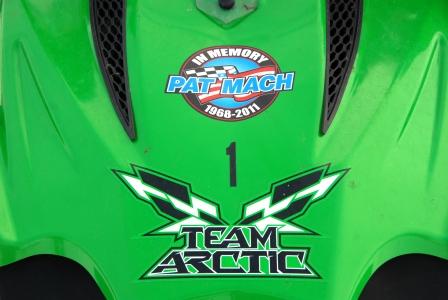 RIP Pat. We miss you. Yet we’re glad to see your circuit remains, and already has THIS schedule for next season.