Some Sleds You’ll Likely See at the 50th

Based on what I’m hearing from people who are going to Arctic Cat’s 50th Anniversary party, there are going to be hundreds of drop-dead-gorgeous Arctic Cat machines on display, like this 1971 634 Puma Mod from the Ische family collection.

Tom Ische and his family will bring MANY extraordinary machines, perhaps like this 1970 793 Panther with the big triple.

I snapped this shot of Kirk Hibbert a mile before the finish line of the 1990 Jeep 500 cross-country, which he won in stunning fashion aboard his 1990 EXT Special. Kirk will be at the 50th, along with this very EXT Special and perhaps his ’93 I-500 winning ZR.

In fact, the Hibbert family will have a very cool display of this stuff and historical artifacts from Tucker’s career. Tucker will be there, of course, and he’s mentioned some sweet interactive displays as well.

How about this: Tom Rowland is planning to bring more than 60 machines, many of which are some of the most historic sleds in company history, such as his collection of 1982 Cats.

He’s also bringing this early-build 1985 El Tigre, the first of the AFS Cats.

And he’ll have his collection of Firecat prototypes, including this late-generation proto. 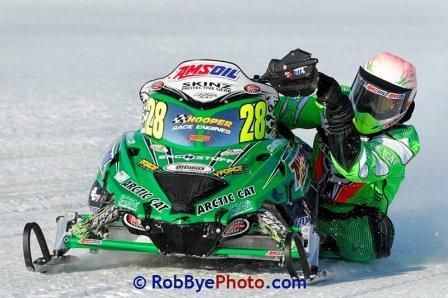 P.J. Wanderscheid and the Wanderscheid Racing/Country Cat crew will be there, along with many of P.J.’s World Championship-winning oval sleds.

And with a recent shipment of decals from Action Graphics, you can be sure you’ll see plent of ArcticInsider decals throughout TRF that weekend.

In fact, check the bumper of your truck before leaving town.