I’ve been gathering more photos for my book project, so naturally there’s some rejects that still deserve some attention. And not always for the right reasons. 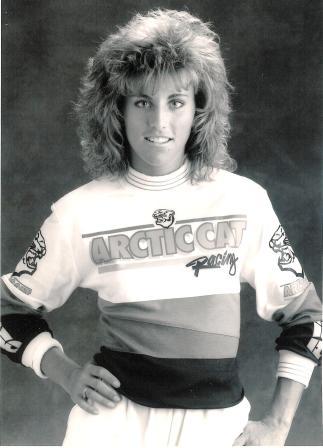 I’ve been around the block enough times to know that fashion comes and goes and comes back again. So my question is, will this “look” make a reprisal? Perhaps for Arctic Cat’s 50th celebration? 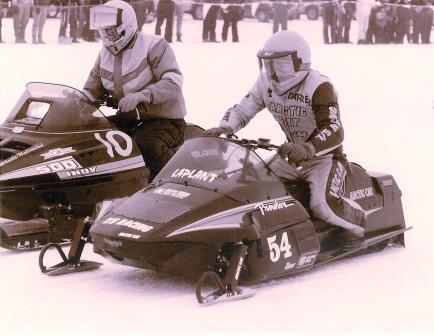 Gotta love the old MRP Racing days, when you’d have ice lemans races in which someone with a full-on ice sled would match up agains someone with a pure stocker. In this case, Darrel LaPlant is on one of the sweet T/S Racing sleds that kicked serious booty in the ’91 season, paring off against Rolf Otterness on a ’90 Indy 500. I haven’t seen Darrel or Rolf in years, wonder what they’re doing these days? 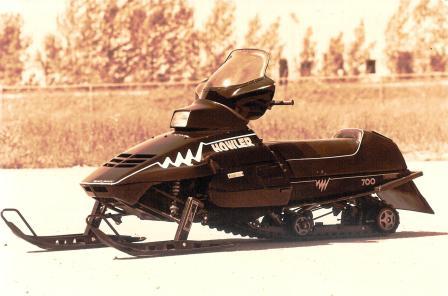 As long as we’re rolling down Prowler Lane, how about this highly hyped Howler!?! A creation of the Black Magic crew prior to Arctic Cat offering the Wildcat, I heard lots of big claims about this machine but never actually rode one. I wonder what one of these babies would fetch on evilBay right now?

I’m probably going to make some enemies with what I’m about to say, but it’s late and I can’t help myself. The sled above is the ’90 Arctic Cat EXT Special, which won the Jeep 500, a mess of classes at Eagle River and on the USSA circuit, as well as countless smaller events. Arctic Cat went from this amazing machine, to the Prowler (Special) for the ’91 race season. That was a pretty big step backwards in terms of race/performance sled competancy. I remember riding Rex Hibbert’s ’90 Special in Driggs, Idaho, late that season, and absolutely loving the sled like no other Arctic Cat that came before it. And then I remember racing the ’91 Prowler Special in the ’91 Jeep 500, and wondering what the heck happened! I know the guy racing the sled above — Brian Nelson — wasn’t much of a Prowler fan, either. 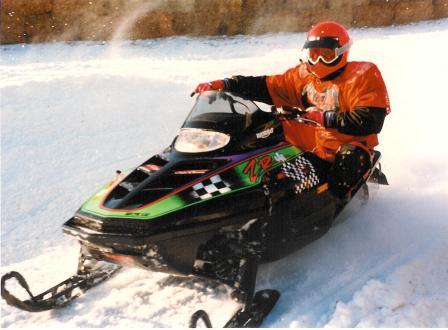 Well, Arctic Cat more than redeemed the Prowler period when the hit us with the amazing ZR. All was forgiven. A bonus sticker selection to the first person who can name the football player, er, guy above AND name four additional people on their CMF team. But please, no writing what CMF stood for. 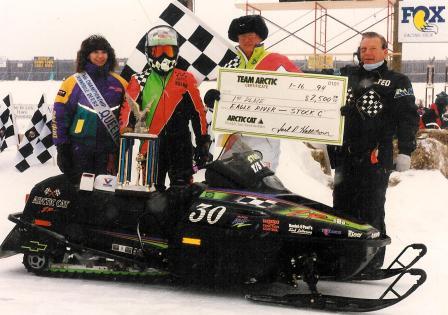 I included this photo for the following reasons. One, it’s Brian Sturgeon as I will always picture him, adorned in Team Arctic leathers and a Super Seer-equipped helmet. Classic. Two, Joey Hallstrom is wearing one of the swankiest get-ups I’ve ever seen. Problem is, he’s holding up that damn check so we can’t see the billboard-of-white that is his Arcticwear suit. Three, though it’s difficult to see at the resolution we have here, Ted Otto is flashing a seriously creepy look. And four, I wanted to include some mention of Fox gas shocks (who is a great sponsor of this Website) just so Charlie Plueddeman can email me later and give me crap about it. Charlie also loves the nice beer selection in my refridgerator whenever he stays at my house, but somehow he doesn’t connect the dots. 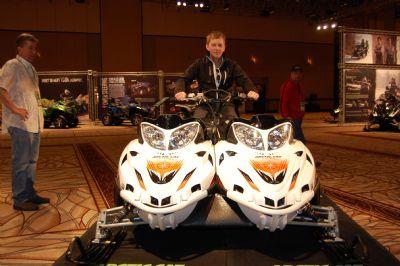 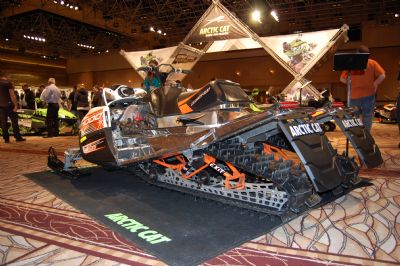 And who said that the Ski-Doo Twin Tracker had no practical application to modern snowmobiles? Oh, right. I did once in a Snow Week story I’d written, which resulted in a serious butt-chewing from Ski-Doo, followed by another from my boss (who claimed he hadn’t proofed my column before it went to press.) Ah, the good ol’ days of unpolished/youthful exuberance…Snow Week magazine employment… and getting “talked to” weekly by my then-boss.

Frankly, I used to get “talked to” a lot by Ski-Doo (and my boss) when I worked at Snow Week/Snow Goer. At the time, they built crap consumer sleds (anyone who’s ridden a ’90-’91 Formula over a single 4-in. stutter bump will confirm my opinion), and I would often times say that (with more flowering language, of course) in the stories I wrote. I even got a phone call from the then-president of the company, Pierre Beaudoin, essentially telling me I was wrong, which of course intimidated the heck out of me. But I stuck to my guns and felt vindicated when they started copying the Polaris Indy and built some good sleds beginning around 1996.

Anyway, I included the above photo because, when I used to get those phone calls, I’d sometimes imagine that the Ski-Doo guy on the other end of the call was actually Mr. Ski-Doo, the creepy mascot in this photo. 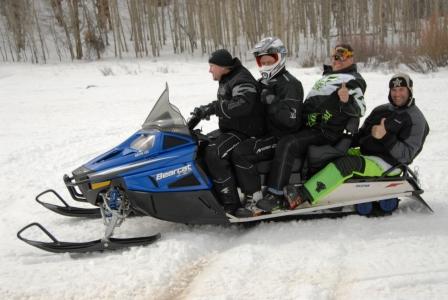 Wow, this post really meandered into some memories of my old magazine days. Hmmm…

Well, I’ve grown up. And since my Snow Week days 20 years ago, I’ve learned that snowmobiling is a serious matter, and not to be joked about. The clowns above apparently didn’t get the memo. 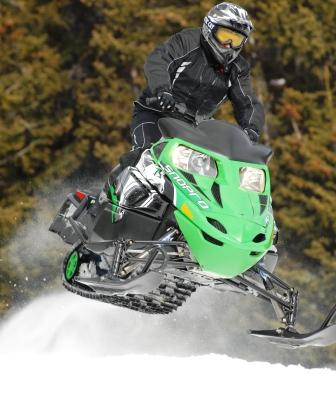 Here’s Jared Hibbert, ripping it up on a 2010 Arctic Cat F8 Sno Pro near Grand Lake, Colo. He’s being serious, which is good. 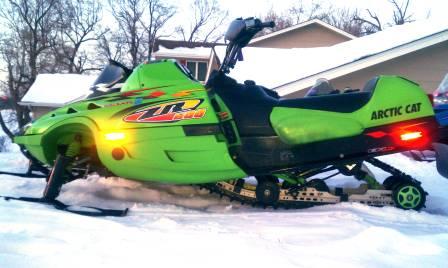 Speaking of serious, how about the neighbor down the road who seriously put a 10-plus-10-equals-20-in. handlebar riser on his ZR 600? That’s some serious riser, baby. 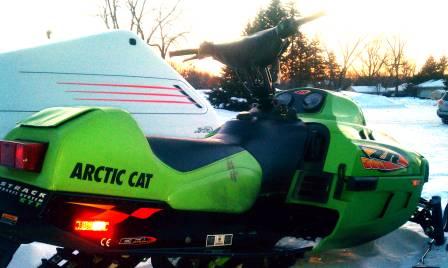 Here’s another look at it from the backside. 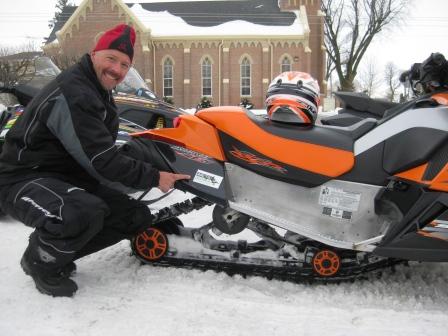 Speaking of local neighbors… I received an impromptu invite from this guy, Todd Ulschmid, to join him and some other New Prague, Minn., sledders on a ride last weekend. Todd hangs out on this site a lot, yet despite living 15 minutes apart, this was the first time we’d met in-person. He was sporting the first-gen ArcticInsider decal on his F8, but only because it’s part of the sponsorship deal we worked out. 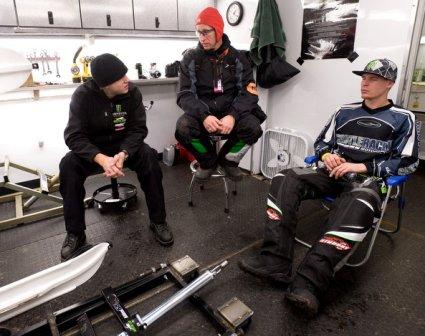 I’ll finish this post up with some serious insight into what makes a winner.

Want to know the secret to Tucker’s success? Me too, which is why I’m always stalking him in the Monster Big Rig between races, hoping to gleam a nugget of insight into going fast. When this shot was taken, Tucker had fallen asleep to a conversation about puking during a MTN bike race that Rob (left) and I were having.

I never learn much about going fast when I hang in the Monster Rig, but I get lots of energy drink and a few cookies.