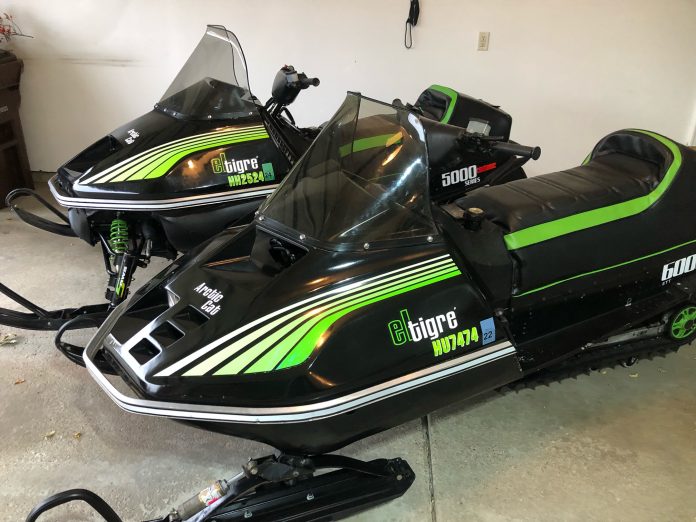 Mods, Customs and Restorations are some of my favorite things, and many following ArcticInsider are seriously talented in those arenas. If you have something falling into that category, and it has some tie to the Arctic Cat brand, please send me a few photos and a description, and Ill run them as a Reader Rides feature. (arcticinsider@gmail.com)

This one is from Richard Buresh who has a sweet pair of 78-based El Tigres.

“I guess you could say I have the same weakness as Aaron Scheele for the 78 El Tigre – The 5000 was my very first snowmobile I bought myself.

While Aaron’s custom El Tigre’s are what dreams are made of, I’d love to see a write up on his fleet of 1978 custom Cats. (HERE’S ONE) As a side note, I recently retired from the same company Aaron works at. We were at different locations and departments, but would meet every once in a while, and it was always fun talking to him.

I got the bug to get into vintage snowmobiles after reading articles about them on ArcticInsider. Roughly ten years ago, I purchased two non-running El Tigre’s and a standalone 5000 free air engine. After a lot of disassembly and assembly, I had a running free air 5000 that I took to the Waconia trail ride and was a ton of fun. Every year I would add to it –  at the 2015 Waconia Ride-In (Feature year of Arctic Cat / Polaris), it had Wilwood brakes, 121 track, ZR skid and modern clutches. I was fortunate enough to be in the photograph of all the El Tigres in Aaron Scheele’s group on the lake.

This one is really fun to ride especially through swamps and fields. The combination of the Cobra track and light chassis makes it feel like a lightweight (short) mountain sled.

The independent front suspension 5000 was an involved undertaking. I had an extra free air hood, seat, tank and console, but envisioned something more custom.

The best handling Arctic Cat sit down chassis I could think of was the aluminum AWS 5 and the largest fan-cooled engine Cat made was the 570, so that is what I started with last winter and went through all the swaps this fall for parts.

Tearing it all down and building it back up, I married the 1978 parts to those on the 2002, which is basically a 570Z with updated gas shock and TSL suspension and titanium springs from a 2001 ZR800 I had. The engine needed work as it had no spark, needed new stator, and fitting the large gauges in the old console to clear the tank was an interesting hurdle. Those parts were on/off several times and the tach cable ended up routing through the airbox to make it fit.

With our recent snow, Ive gotten this one out for some test rides and look forward to bringing to the Midwest Ride-In at ERX in January.

Thanks for the reply and keeping ArcticInsider going.”

Have a great day,