Those have been the questions swirling through my head ever since learning of the two new-for-2014 Arctic Cat powerplants. Thanks to several days riding them in Island Park, Idaho (plus a day in Thief River Falls), I have some answers. 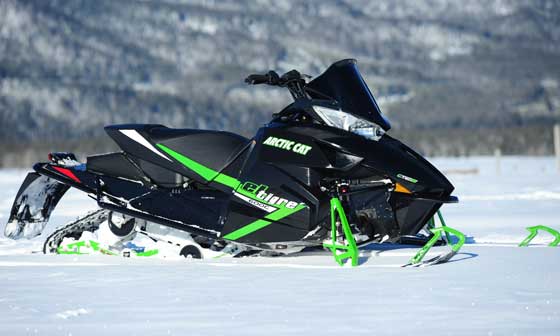 The first time I rode the new 600 was about a month ago with a group of Arctic Cat engineers in TRF. My first impression of the engine there was confirmed when I rode it again in Island Park for four days: It rips!

It’s easy to pull-start and idles with less ski-tip-vibration than the 800 (and with much less exhaust smoke). The sound is strong and typical of a 2-stroke spinning at 8100-8300 rpm.

It feels strong from the bottom through the top. Really strong, in fact.

The sled is light, flickable and so dang much fun. Of all the 2014 models I rode, I could go the hardest on it.

Like the 600, the first time I rode the Yamaha triple in the ProCross chassis was month or so ago in TRF, in the same group mentioned above. My first impression of it was that it was strong (especially on the bottom and mid-range), but that it seemed tame compared to what I remembered it feeling like on the Yamaha Nytro.

Peg the throttle and it jumps to around 8500 rpm and then builds up around 8800 when it gets its full legs.

The sound is great, but it’s definitely more muted than on the Nytro. It’s smooth and quick-revving. Engine braking is minimal except when it really idles down, like during those moments just before you come to a stop.

Because of its sweet sound, instant response and strong punch, it accelerates and behaves more like a 2-stroke than the Suzuki 1100 and Turbo. While it’s something like 10 lbs. lighter than the 1100 non-turbo, it’s still a 4-stroke and thus you can feel the added weight up front.

Before I compared the two side-by-side, I thought the 6000 would have out-accelerated the 7000. I was wrong.

First of all, let’s get the chest-thumping out of the way… Drag race these three sleds for a quarter-mile and the 7000 will win by a few sled lengths ahead of the 6000, with the 5000 more than a few sled lengths behind the 6000. Where the 7000 beats the 6000 is on the bottom and mid-range, where its extra 10 hp makes the difference.

I had no place to stretch these machines beyond a quarter mile, but based on how the 6000 was starting to creep back up to the 7000 at that point, my guess is that terminal speed is similar between the two.

I’m not sure if any of this makes a difference, though, as both are close, both will put a huge smile on the face of anyone in the market for this kind of horsepower. After all, if you wanted to win drag races, you’d skip 123-135 hp class and jump to an 800 or Turbo.

Far more interesting to me is how these sleds worked on the trail.

There, I absolutely fell in love with the 6000. The combo of 123 hp and the lightweight package makes the ZR6000 a complete hoot and hits the sweet spot of performance.

The 7000 is great on the trail and, like all machines with a heavier engine, stays nicely planted in the corners. However, you feel that extra weight (and its higher mounting position in the chassis) when you need to slow down in a hurry, or when you want to play in the bumps, or when you negotiate an off-camber corner.

In those circumstances, lighter is always better.

I wish I could tell you the MPG of these machines, but that wasn’t an option and will have to wait until next winter.

One final thing to say regarding comparisons: While the 5000 (1100 non-turbo) is down a bit on performance compared to these new engines, I am still impressed by this engine. Really, I believe the only characteristic that this motor suffers from is its poor sound quality… which is a statement that needs additional discussion.

Don’t Believe Everything You Hear

I’ve concluded with certainty that engine sound plays a significant role in my riding experience.

Above I wrote that, prior to actually comparing the two; I thought the 6000 accelerated quicker than the 7000. When the opposite was true, I realized that the deception was the difference in sound between the two engines.

The 6000 sings like a typical 2-stroke while the 7000 is more muted and civilized than I expected, especially compared to the Yamaha Nytro (whose exhaust exits behind the seat).

Is There a Winner?

Yep… us! Because we have exceptional options.

If you want the 120-135 hp range, your choice now is whether to go 2-stroke or 4-stroke. With a clean 2-stroke and (what I believe is) the overall best 4-stroke now in the Arctic Cat arsenal, that choice has become more difficult.

The new 7000 is a sweetheart of an engine. It’s clean, lighter than the 1100 4-stroke and delivers the kind of acceleration that’s just plain fun. That kind of fun is one of the things I love about snowmobiles. I don’t care too much about top speed, but I love to accelerate, and this sled does so superbly. The ProCross chassis package hides its extra weight quite well. Its U.S. MSRP is $12,599.

The new C-TEC2 is clean. It builds EPA emissions credits rather than consuming them. Yes, there’s a bit of exhaust smoke, but only a very little. It’s light, pulls hard and helps make the ZR6000 extremely easy to affect. By affect, I mean decelerate; jump; lean to plant both skis; lift (for something as simple as ski dollies); sidehill (yes, I still do this with short track sleds); and play in the bumps. It’s U.S. MSRP with E-start is $11,599 (or $11,199 for pull-start only).

Truly, I would be thrilled with either choice. I’m picking the ZR6000.