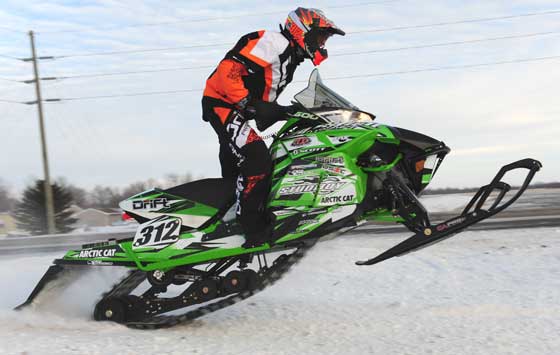 Team Arctic cross-country racers continued their season long domination of the USXC circuit with another stunning display of success in two separate days of competition in Park Rapids, Minn. With 38 classes of competition during the two-race event, Team Green captured 28 (out of 38 total) class wins, including 13 sweeps of the podium.

Leading the charge in Park Rapids was Christian Bros. Racing rookie Pro phenom Zach Herfindahl, who captured three of the four Pro class victories during the weekend aboard his Sno Pro 600 in the ProCross chassis. Herfindahl was joined by teammate Ryan Simons as well as Wes Selby on the podium in three of the four events.

“Zach continues to amaze us with his speed and poise,” said Team Arctic Race Manager Mike Kloety. “Had he not suffered a burn down in the one final, I’m certain he would have swept all four finals at Park Rapids. But racing is full of what-if scenarios, which is what happened to his teammate Ryan Simons, who broke a bone in his shoulder on the first day and had to nurse a slow pace the remainder of the weekend.”

While Team Arctic’s contingent of Pro riders kept their nearly complete lock on the top classes, the contingent of support riders continued their reign. Benjamin Langaas delivered a season-best performance to win all four of the Expert 85-hp classes aboard his Sno Pro 500. Ryan Trout came within a whisker of doing the same, scoring three victories and a second place in the Junior and Sport 85 classes. Jolene Bute was a double-winner over the weekend in the Women’s class, while John Koch scored his double in the Masters 40 classes.

“Our success is the result of the tireless efforts of our racers and crews,” said Kloety. “Whether it’s the handful of racers who are winning or the many more that are here to do their best and enjoy the sport, Team Arctic is in a class by themselves.”