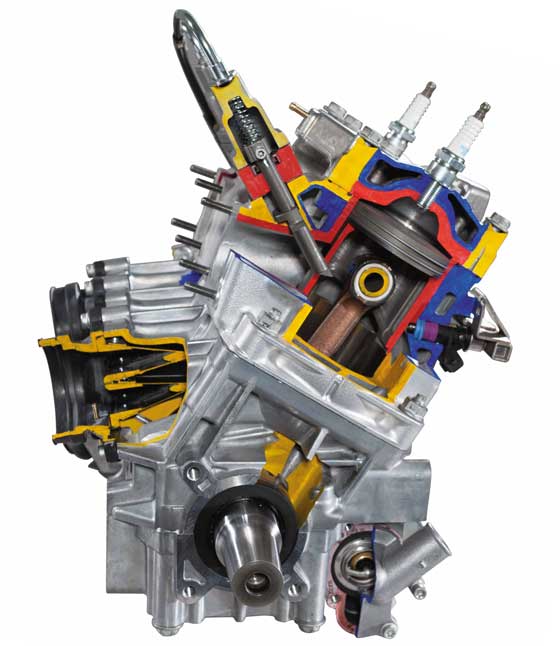 The all-new 600 Clean-Technology 2-Stroke (or “C-TEC2” for short) is the first snowmobile engine designed engineered and produced by Arctic Cat.

It features a bunch of interesting technology like Dual-Stage Injection, unique open-window pistons, electronic oil metering and more, all of which reflects decades of engine design knowledge from the same Arctic Cat engineers who created the laydown engine, Exhaust Pipe Temperature Sensor and batteryless EFI.

“Every component of the C-TEC2 600 was designed and sourced by Arctic Cat,” said Donn Eide, Snowmobile Engine Design Manager at Arctic Cat. “It is a clean-sheet design incorporating new and existing technology pioneered by our team of engineers.”

Laydown Architecture: The laydown design common to Arctic Cat since the 2002 Sno Pro 440 race sled (Firecat) means that the combustion forces are in a different directional plane than the horizontal plane of the crankcase halves. The result is the stiffest and most robust crankshaft-capture of any engine design.

Dual-Stage Injection: At lower engine loads, the system injects fuel directly into the combustion chamber, on top of the piston. At higher engine loads fuel is also injected into the crankcase area and into the transfer ports, improving the fuel/air transfer time for added efficiency while also lubricating vital engine components

Slotted Piston: The unique open-window/slotted piston design allows fuel/oil mix to be injected into the crankcase area and then into the transfer ports as part of the Dual-Stage Injection design.

Key to this design is the injection of fuel (with oil) at the piston rod bearing, which a competitive DI system does not achieve (and which is known for problems).

Electric Oil Pump: Controlled by the engine management system, an electric oil pump delivers the precise oil requirements, from engine idle to full-throttle, adjusting oil consumption from sea level to high altitude. Oil is injected into the air intake flanges and the fuel rail for full engine lubrication including the pistons.

Fuel:oil ratios can be as high as 65:1 depending on load, which is why the C-TEC2 uses so little oil (and why the engine requires the oil formulated specifically for it).

Oil & Fuel Mix in the Rail: For maximum bearing life, a small amount of oil is delivered to the fuel rail and mixed with the fuel prior to injection. When the fuel is injected and travels through the piston skirt slot, the piston pin bearing receives added lubrication to ensure optimal bearing life even in the most extreme situations.

This is another key difference from high-pressure DI systems which require a return fuel loop back into the fuel tank, thus preventing oil from being injected into the rail (instead, oil is injected directly into the engine). The lack of oil lubrication via the fuel spray is a huge challenge for other systems.

Knock Sensor: An engine knock sensor detects detonation due to fuel octane, quality and/or ethanol content. Based on information from the knock sensor, the engine management system adjusts ignition timing and fuel delivery for optimum performance and combustion. If fuel quality is such that the combination of reduced engine timing and a richer fuel/air mixture can’t prevent detonation, the engine goes into safe mode until fuel quality improves.

The engine is designed for 91 octane fuel.

Air-Only Throttle Bodies: Two 47-mm new-generation throttle bodies flow air into the crankcase. In addition to flowing only air (and not fuel), these throttle bodies are shorter and lighter than those used with previous engines.

Here’s a 2014 Arctic Cat ZR6000 el tigre parked in front of a batch of 600 engines inside the St. Cloud, Minn., engine production facility.