Last week I spent a day railing, thrashing, crawling and otherwise trying to beat the pulp out of the just-announced 50-in. wide 2014 Arctic Cat Wildcat Trail.

The result: I surrender… the Wildcat Trail won my heart and mind. 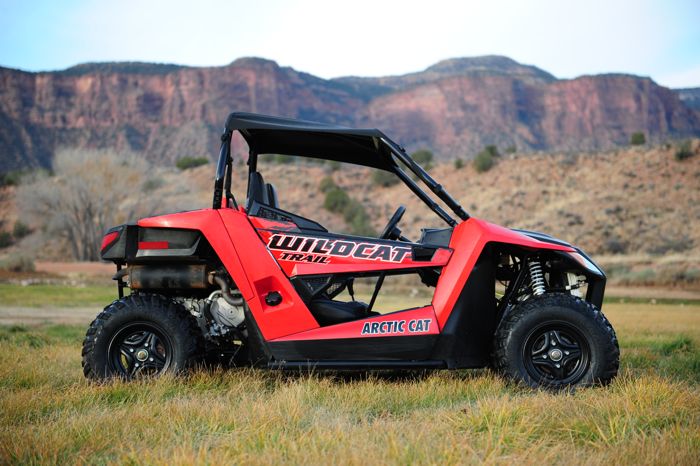 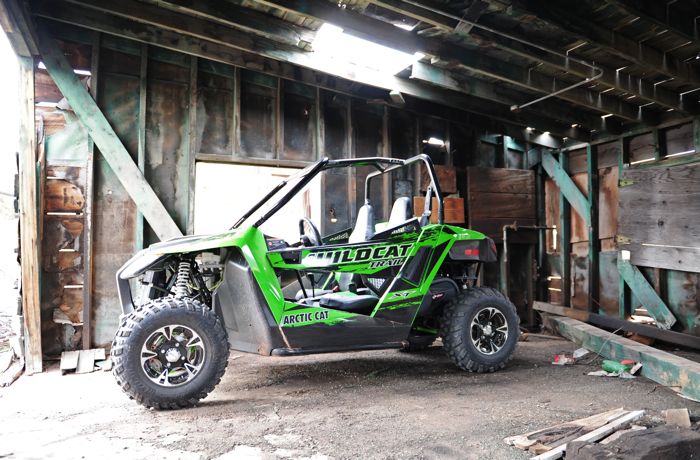 The naming makes it clear that these new machines are legal in the many states with UTV/ATV laws imposing a maximum width of 50 inches. 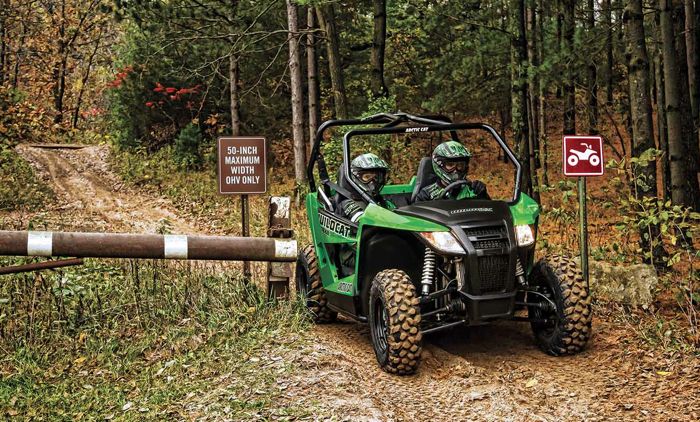 It’s no secret that Arctic Cat enters the 50-wide side-by-side market following the path first taken by Polaris. And like it did when it designed the first, full-size Wildcat, Arctic Cat undoubtedly considered all that it knew about the Polaris 50-in. models when it commenced with the Wildcat Trail.

That consideration meant that Arctic Cat addressed the RZR’s tippy feeling by stretching the Wildcat’s wheelbase to 84.6-in. (6 in. longer), which allowed Cat to mount the twin bucket seats 3 in. lower in the chassis. The result is that the Wildcat Trail drives WAY more stable at high speeds or while crawling.

Our group of journalists and Arctic Cat personnel spent a good portion of a day rallying twisty BLM dirt roads at speeds that I would not have believed had I not experienced myself (and that would have put competitive models on their sides and canopies).

Conversely, the new Cats feel planted and very stable. There are four key points I want you to remember from this review. The Wildcat Trail’s excellent stability is one of them. 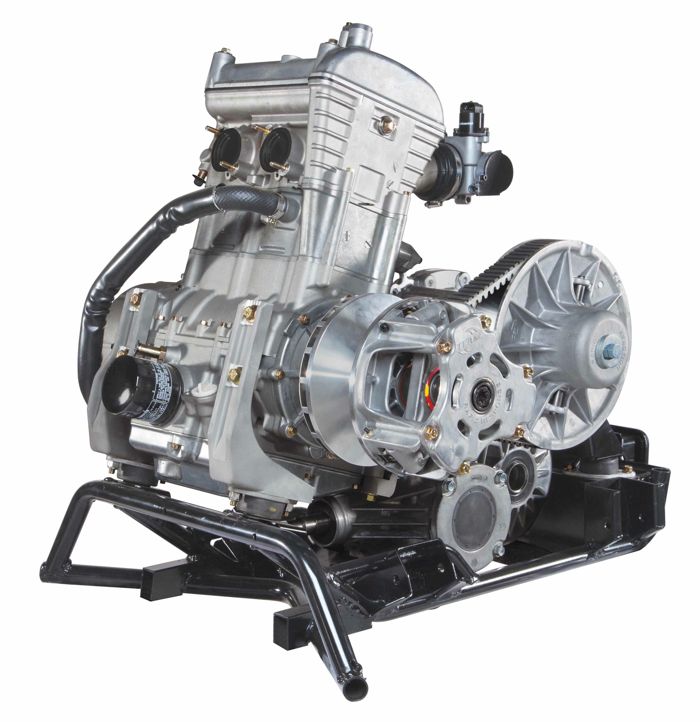 Horsepower/engine performance was another bit of “market knowledge” that informed the Wildcat Trail’s design, and the second key point I hope to convey. As such, Arctic Cat designed the all-new liquid-cooled, 700cc parallel twin engine to produce more than 60 horsepower, a nice and notable bump compared to the RZR’s 53 hp.

With quick-shifting TEAM Rapid Response clutches transferring those ponies to the nifty TEAM bolt-on transaxle, the Wildcat Trail pretty much hauls the mail compared to the competition. I routinely hit 63 mph on flat, open sections, however it was the powertrain’s spirited mid-range that most impressed me.

In fact, it was the Trail’s acceleration that surprised me the most. All day long I and the other journalists flogged the heck out of the fleet of Wildcat Trails. And every time I did, it felt to me on par with the original, full-sized Wildcat. To confirm my suspicions, I threw down a drag race between the new Trail and the new 90-plus hp Wildcat X.

The result: about a half-car lead for the X during the initial jump, followed by a slow creep ahead up to the top speed ceiling.

Explaining the surprising (to me) acceleration parity between the two machines, Arctic Cat engineers Mark Esala and Jared Spindler said it’s all power-to-weight. Coming in just under 1000 lbs., the new Trail is lighter than its big brother.

Stomp on the gas from a stop and the new Trail has enough power to break loose the rear on loose dirt and gravel. Do another foot-stomp while cruising at 30 mph, and it shifts weight nicely to deliver solid, impressive acceleration. In short, it’s fun to drive. 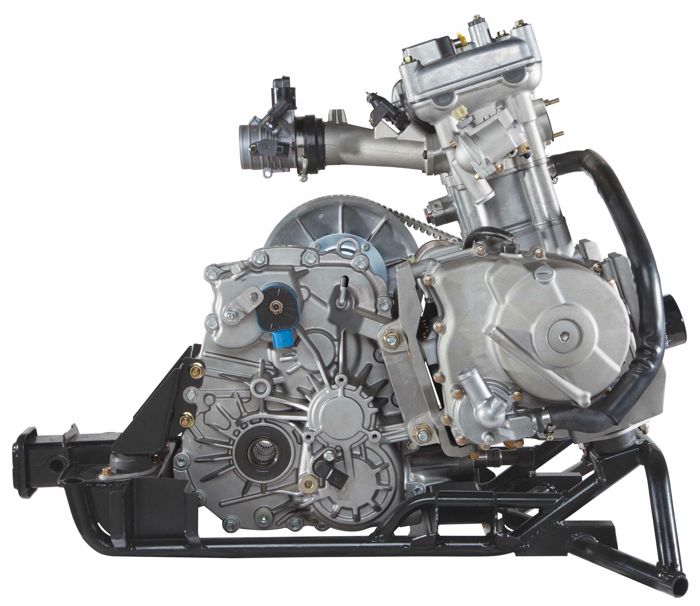 One note on the compact, bolt-on TEAM transaxle unit: It reduces the powertrain’s length by a full 13 in., which enabled Cat to tuck it in nicely behind the seats to achieve the desired 60/40-percent rear/front weight bias of the Trail, which gives the new Trail its light steering (without the need for electronic power steering) and excellent traction/weight transfer during acceleration. 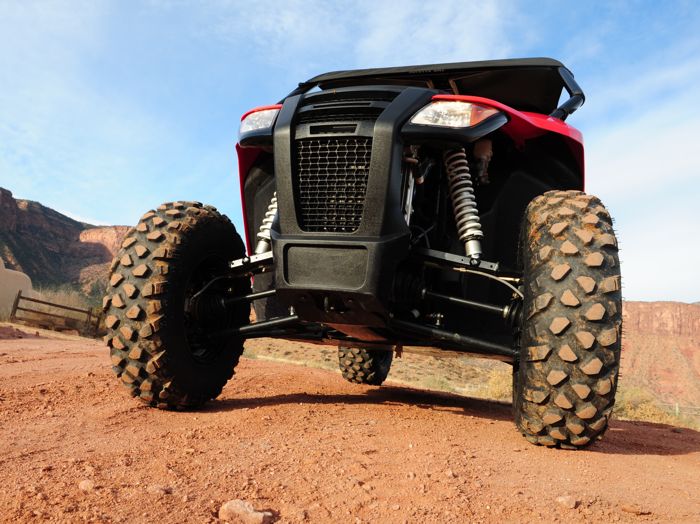 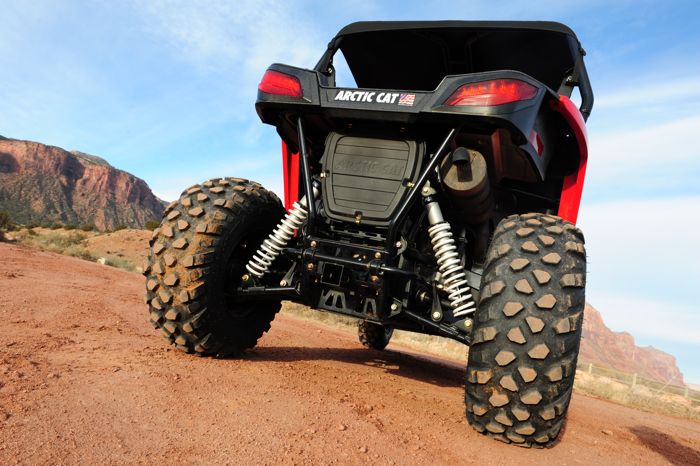 Suspension performance is the third key point I’ll highlight about the new Trails. Here again, Arctic Cat took the same tack it used with the original Wildcat by giving the newest models more travel than the competitors. A full 10 in. of front and 10.5 in. of rear travel are dampened by preload adjustable (and rebuildable) FOX Shox, a significant premium over the competition. Ground clearance is also 10 in.

The double A-arm front and rear suspensions are both equipped with swaybars, which undoubtedly aids the Trail’s stability.

For Midwestern trail riding, the Trail’s suspension performance is comfortable and predictable, though not nearly as plush as the full sized Cats. That’s expected, however, due to eight fewer inches of travel and less pricey shocks. 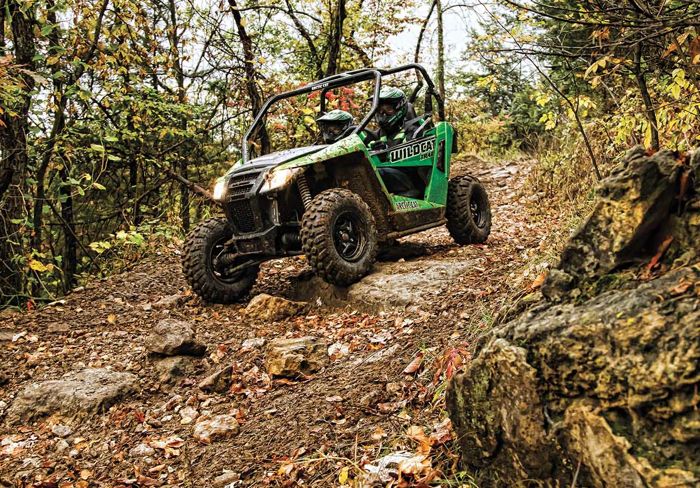 Price is fourth and final key point I’ll make about the new machines. With an MSRP of $10,999 U.S./$12,399 Canada, the Wildcat Trail is $500 LESS than the comparable RZR (despite the Wildcat having a more premium component spec).

In comparison to a regular full-size Wildcat, the new Trail is more useable to me as resident of Minnesota (where UTVs that exceed 1000 lbs. are restricted from certain trails). Likewise, if I were looking at UTVs for my family of four, there’s no question I’d opt for two Wildcat Trails (total MSRP of $22K) rather than Wildcat 4 four-seater at $19.6K. Way more fun and versatile to have two 2-seaters in this part of the country. I would have a different opinion if I lived in the Southwest (Arizona and California). 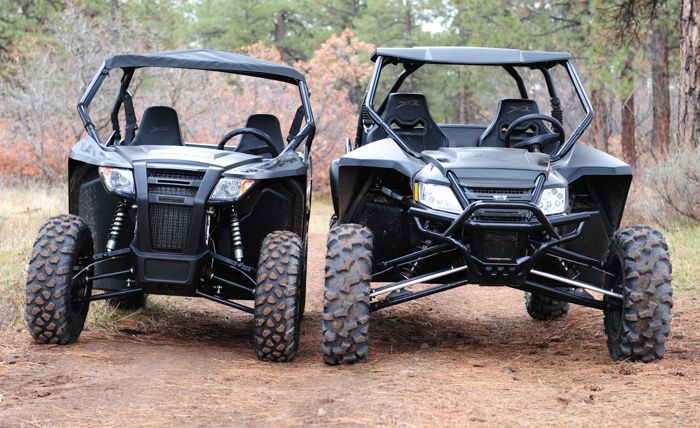 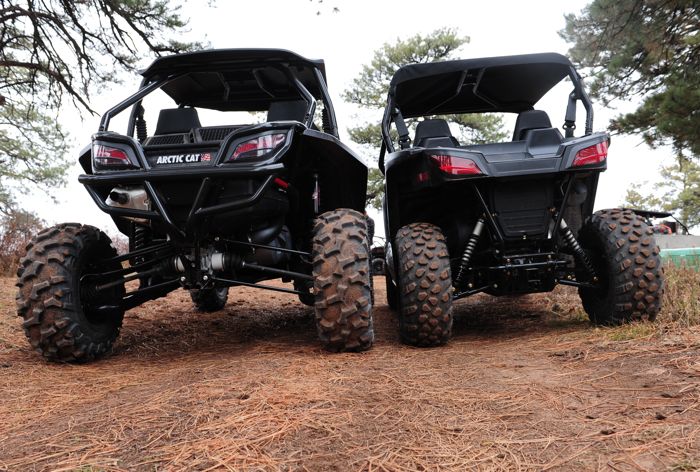 I’m 5-foot 9-inches when I wear two pairs of socks, so the cockpit of the new Cats felt plenty comfortable during a six hour riding session punctuated by a few photo-op stops. During one of these stops, I recruited my 6-ft. 2-in. cohort Pat Bourgeois to ride with me for 20 minutes, both of us swapping driver/passenger positions to get a feel for two-up riding.

Not once did we bump shoulders, touch helmets, hold hands or otherwise get close enough to elicit uncomfortable jokes. Verdict: It’s a comfortable machine for two adults.

Other notable features of the new machines: 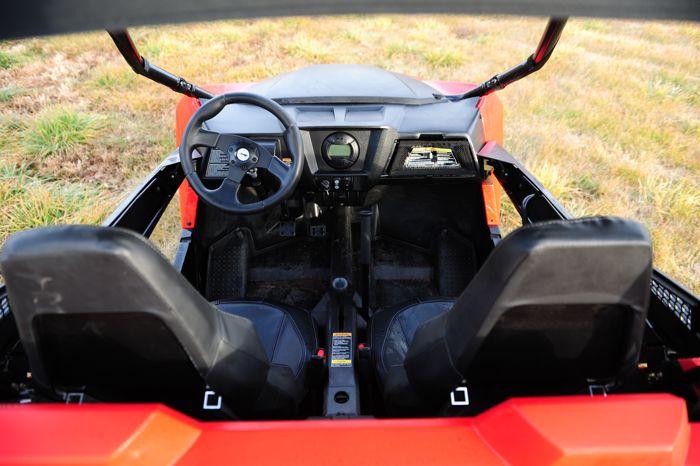 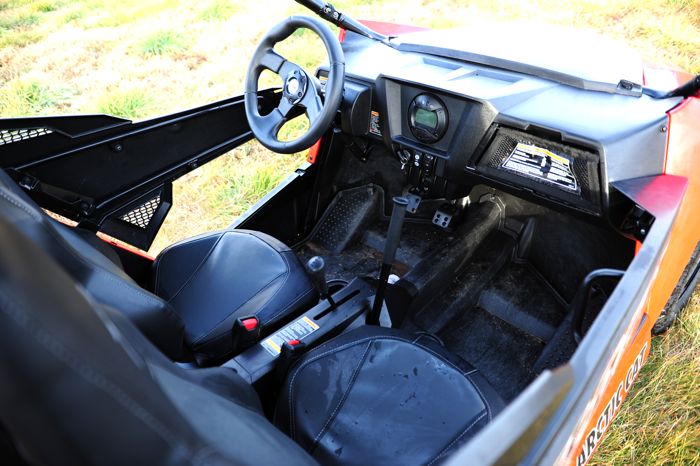 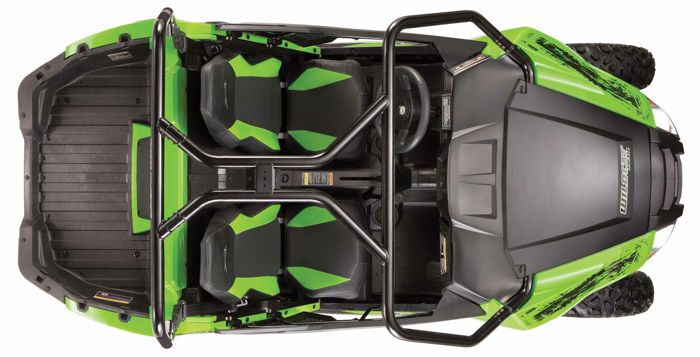 The new Wildcat Trail models will hit Arctic Cat dealerships beginning in January, along with an initial offering of 85 accessories. There’s no doubt in my mind they’ll sell a pile of them to customers who will be exceedingly pleased with their purchase.

If you have specific questions about the machine and its ride quality, post them here and I’ll answer. 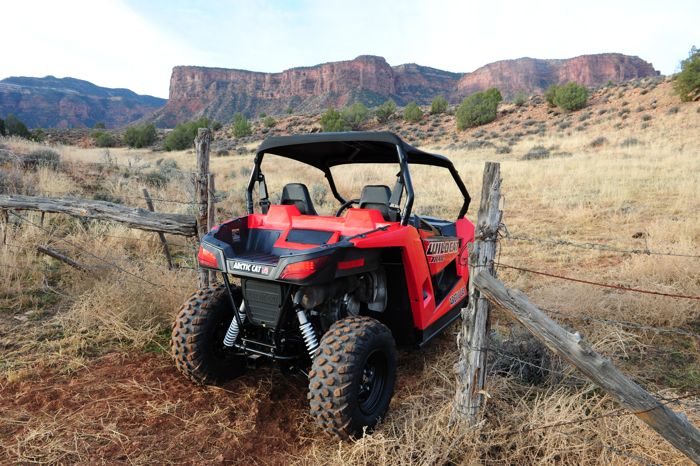 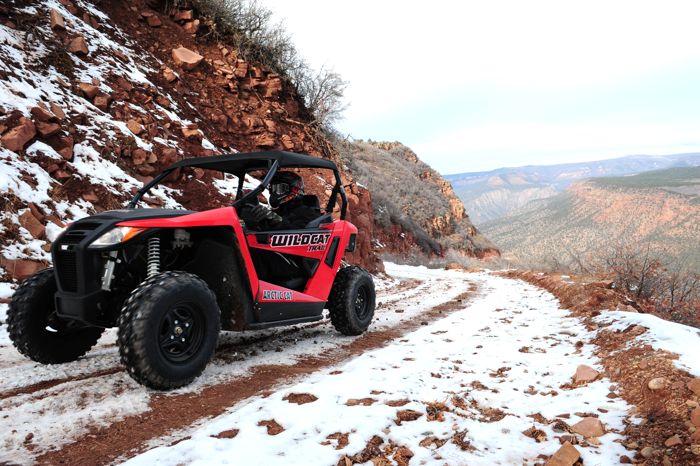 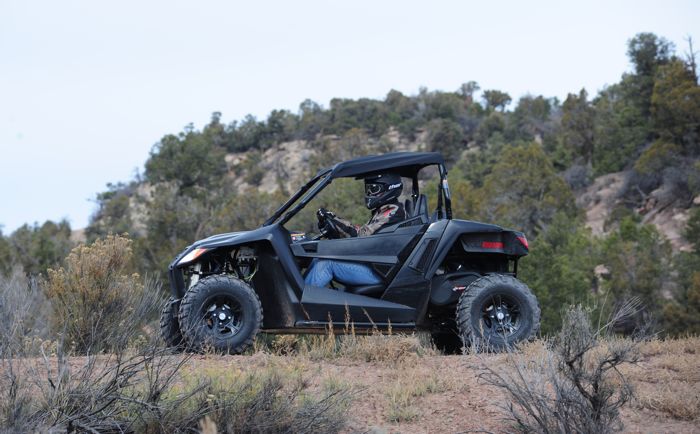 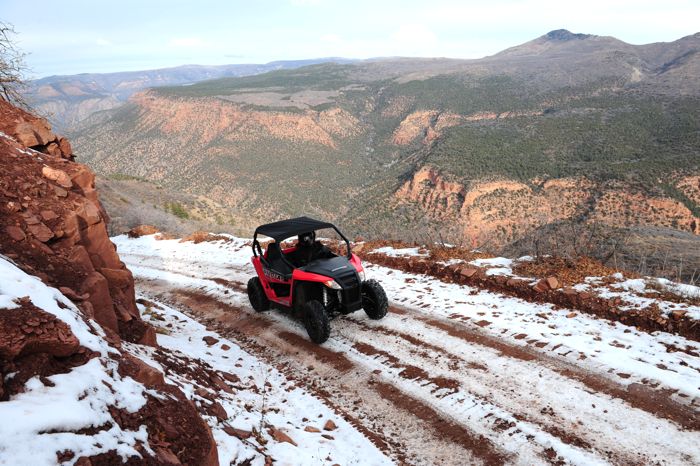