I was at Arctic Cat in Thief River Falls for the past couple of days.

Here’s a snapshot of what (and who) I saw. 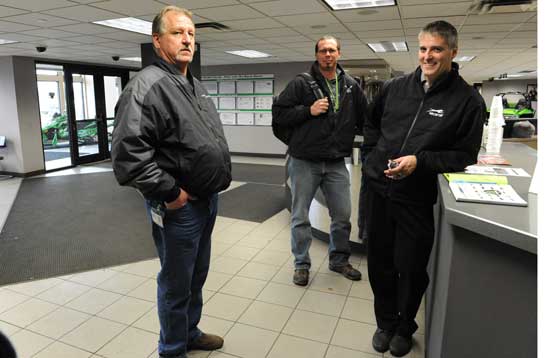 I looked ominous when, inside the lobby, I was greeted by this motley crew. Gary Nelson (left) shoots me a suspicious look, no doubt wondering why I didn’t bring him a T-shirt for his collection. Sorry Gary, next time.

In the middle is Brandon Kisch, who works with Gary in Events and Promotions. On the right is Tom Schaefer of Arcticwear, Arctic Cat oil and other projects. 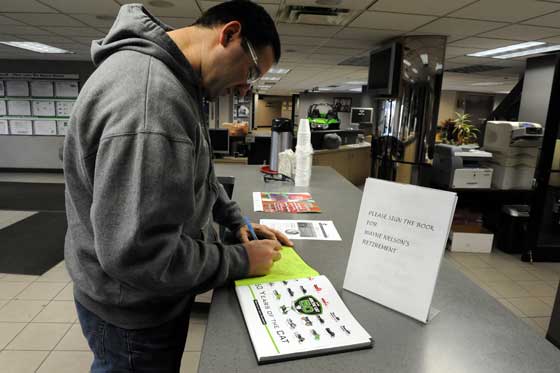 At the lobby was a 50 Years of Arctic Cat book that employees were signing as a retirement gift to Wayne Nelson, who has worked with production (building tools and fixtures and about a hundred other things) for many years. Good luck on your future, Wayne! 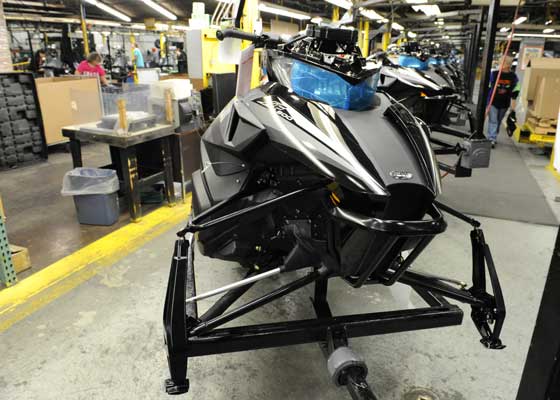 Arctic Cat XF800 CrossTours were on the snowmobile production line. This has been a popular machine for this coming season, thanks to its role as an adventure-touring machine.

This is the spot on the assembly line where the machines are complete, just before they’re taken off for crating. 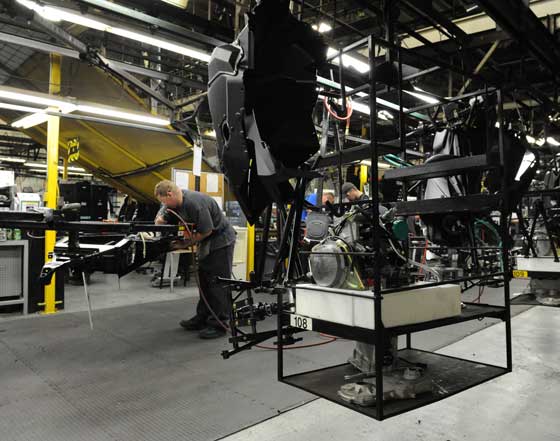 This is spot near the beginning of the line, where the rack of components (right) provides the basis for assembly to the chassis. 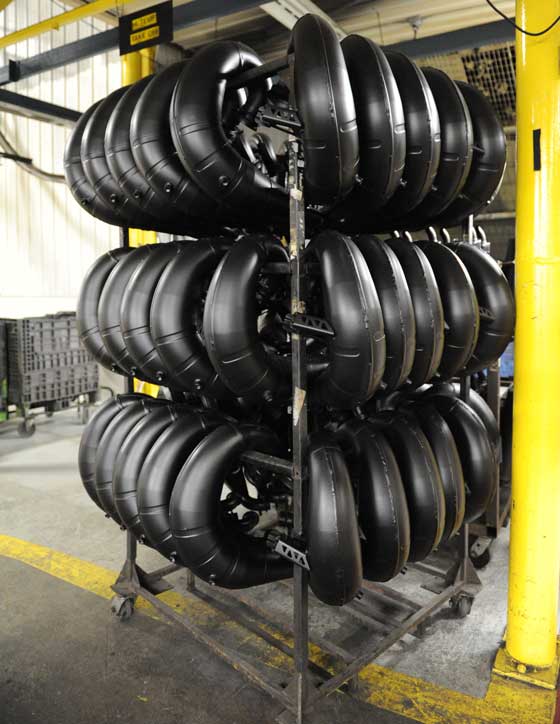 This rack was exhausted from all the support it gives. 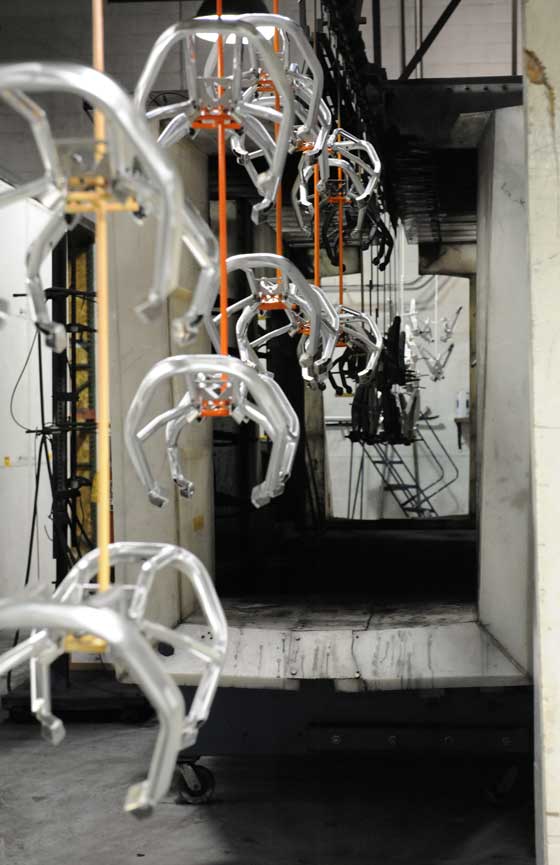 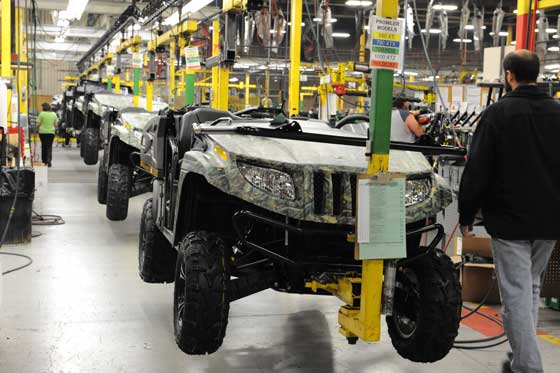 Camouflage HDX models were rolling off the Prowler line, which was fitting considering that it’s the first week of deer season in Minnesota and everyone was talking about their experience afield.

I notice how, depending upon the time of year, there’s a certain theme that surfaces in the conversations I have with people when I’m at Cat. On this trip, the theme was definitely deer hunting.

It’s cool that SO MANY Arctic Cat people are outdoorsmen and women who use the products just the same as you and I. 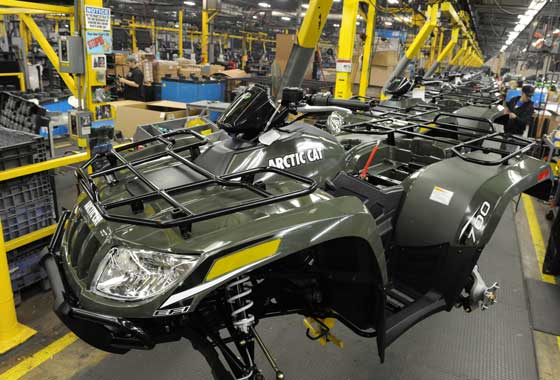 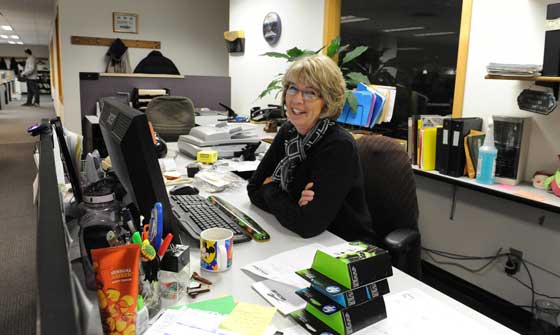 As much as I enjoy seeing snowmobiles, ATVs and side-by-sides come to life, I equally enjoy seeing the people who make it happen. I’m guilty of focusing a lot of my attention on the engineers who design this stuff, but the fact is there are hundreds of other people who make the entire process possible.

One of those people is LaDawn Olson, who assists ATV Engineering as well as production line employees with all kinds of help. LaDawn didn’t want me to shoot this photo because she claimed her desk was messy.

First of all LaDawn, when you’re the assistant to hundred or so people, your desk can’t be perfectly clean. And secondly, if you saw my desk you would understand what a true mess looks like! 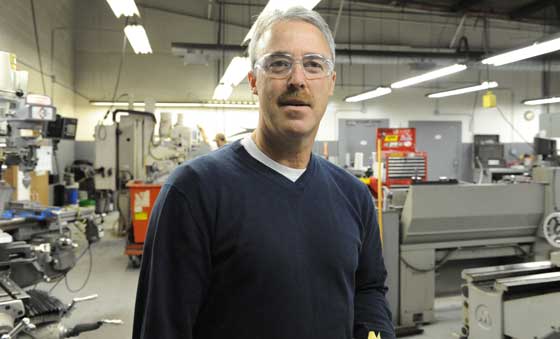 I ran into my friend Kevin Thompson outside of the machine shop, where we caught up on the various happenings in each other’s lives. Kevin shares some hunting stories, as well as the good news that his dad, Davey Thompson, is healthy and enjoying retirement from Arctic Cat. 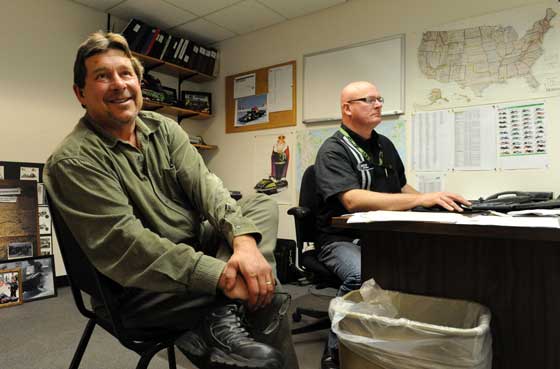 In a different area of Engineering I ran into two people who have been a part of Arctic Cat since before Edgar: Brian Espeseth (left) and Joey Hallstrom. Well, maybe not quite that long, but definitely long enough that they are among the grizzled veterans at the company.

Brian manages the Service & Warranty department at Arctic Cat and Joey is the Snowmobile Product Manager. 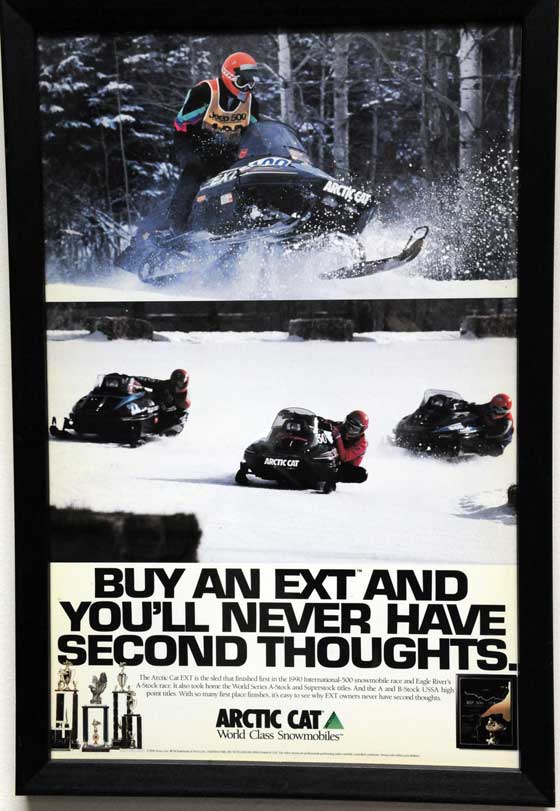 I love looking at the stuff on peoples’ walls, and in Joey’s office hangs this advertisement from the 1990 race season in which Brian Sturgeon and Kirk Hibbert accounted for a pile of huge wins aboard the amazing EXT Special. 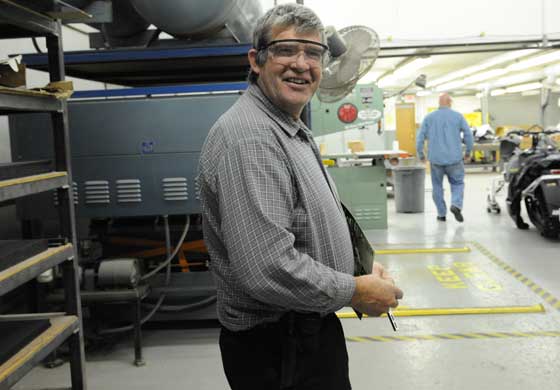 Well lo-and-behold, there was Kirk Hibbert himself! With the snocross race season commencing in just a couple weeks, the pace inside the Hibbert Race Shop is fast and furious. Not surprising, Kirk was practically running between the Machine shop and Styling, barely pausing long enough to shake my hand.

Up in the Sales & Marketing area, the marketing team of Kale Wainer (left) and John Tranby (second from left) were meeting with engineers Brian Dick (second from right) and Troy Halvorson (right) about the 2014 line of snowmobiles.

Looking at this photo and knowing all four of these guys as well as I do, I’m struck by the fact that all four are lifelong snowmobilers whose blood is green and whose passion is Arctic Cat. 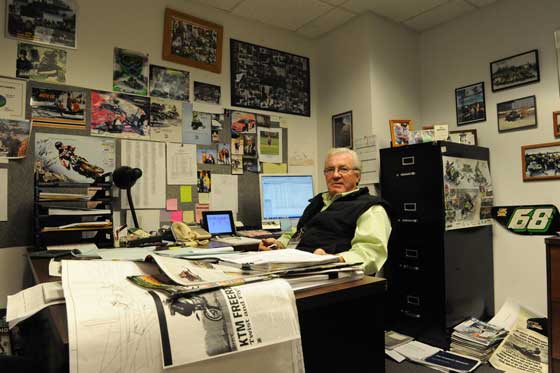 And when it comes to passion for Arctic Cat snowmobiles, everyone stands behind this legend: Roger Skime.

I snapped this pic of Roger at 5:30 in the evening. He was (literally) sketching some ideas for a snowmobile suspension on some paper, eager to talk about his ideas with the kind of enthusiasm you’d expect from a first-year employee who had just downed six cups of coffee.

These days Roger’s focusing on Research & Development, and the ideas that percolate from his imagination are truly wonderful and, perhaps, prophetic. 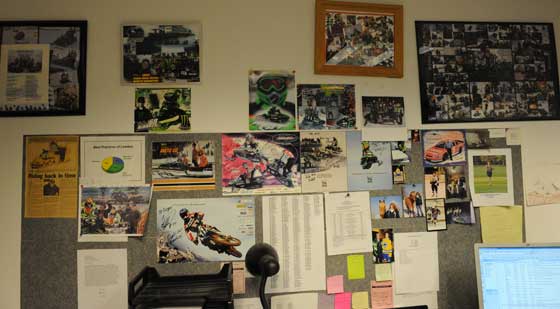 Roger loves many things in life, including his family, Arctic Cat and of course “his” racers. The stuff hanging on his office walls reflect that love.

On this wall you can spy poster/pix of Gary Moyle, P.J. Wanderscheid, Tucker Hibbert, Blair Morgan and several grandkids.

On another wall in Roger’s office is this amazing artwork of legendary Team Arctic racers.

I’ll give a special prize to the first person (besides Stephen Knox) who can correctly identify all of the racers (from left to right). 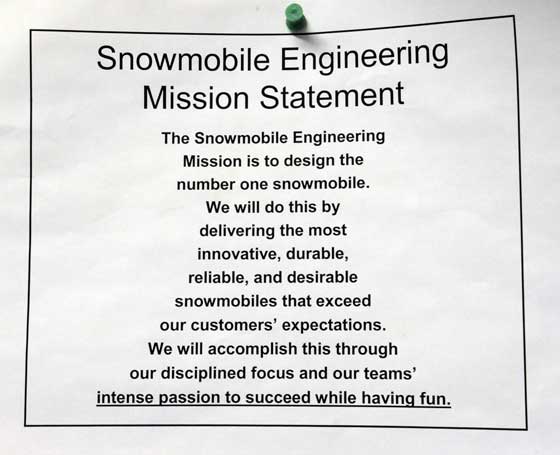 I also know how this mission statement isn’t just a bunch of words: it’s literally part of the DNA of the people who design and build Arctic Cat snowmobiles. Sometimes they nail it perfectly, and sometimes they miss just a bit (far less frequently than I “miss it” in my work life, I might add).

Like Roger always says: It’s not a job, it’s a life.