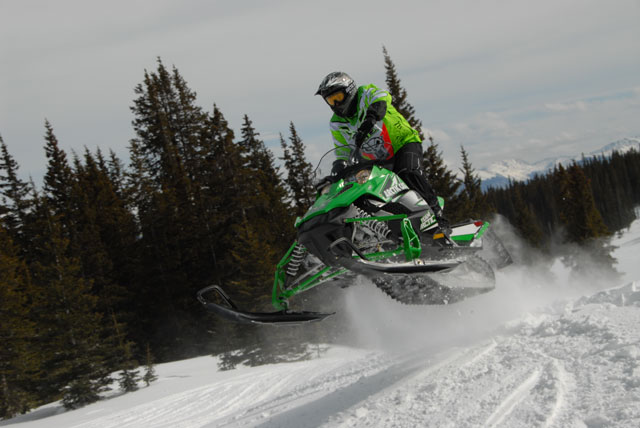 In Part I of this series we illustrated why motors like the 600 consumer laydown twin and 800 H.O. won’t make appearances in the Sno Pro chassis.

In Part II, we uncovered the reasons why Cat didn’t incorporate these dimensionally-larger engines in the Sno Pro chassis, and I speculated why the company won’t re-engineer the chassis and plastic to accept them.

Here, in Part III, I want explain my own time aboard the Sno Pro 500, put it in a historical perspective, then perhaps challenge some of the assumptions we tend to make.

Last winter I logged a few hours of seat time aboard a prototype Sno Pro 500 in Maple Lake, Minn., and Grand Lake, Colo., both of which hosted snowmobile media events that produced all of the magazine coverage that you’ll read this year. 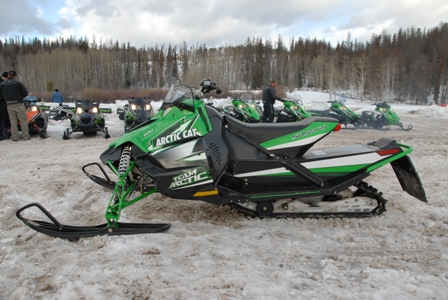 What was immediately apparent each time I rode it was its manners over anything rough, from trail chop to actually holes and jumps (in Maple Lake, Arctic Cat created a bump course for testing, with a full range of everything you’d encounter between small stutter bumps and massive rollers). 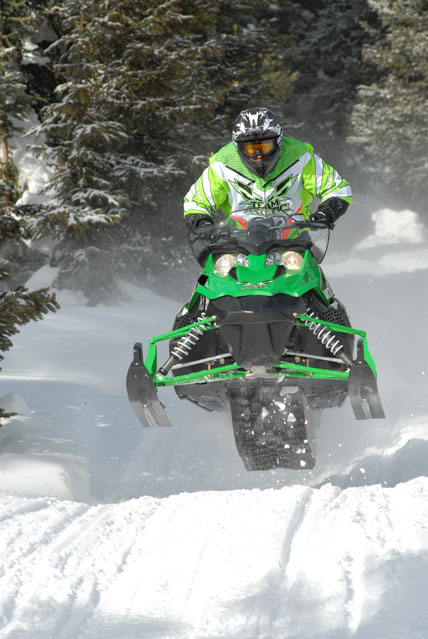 It’s well balanced, placing the rider in the neutral, middle portion of the chassis. Seat height is tall, especially compared with the Firecat and M/Crossfire chassis, with the easiest transitioning from standing-to-seating (and vice versa) of any Arctic Cat I’ve ridden. The seat is narrower than those on the Twin Spar, something that my 31-in. inseam legs appreciated greatly. 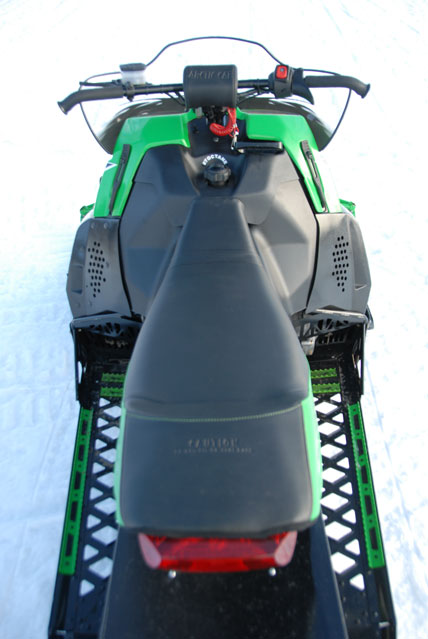 Steering is easy, although not quite as easy as the Twin Spar. The handlebars will feel familiar to anyone who’s ridden a Twin Spar, and their height works well for both riding seated and standing.

The combination of suspension geometry, calibration and the new deeper-keel plastic skis deliver precise cornering that’s slightly more positive than 2009-and-newer Twin Spar sleds and far more positive than ’08-and-older Twin Spar. Those who, like me, use the ZR as the yardstick for cornering precision will not be disappointed, especially considering that the center-of-gravity is significantly higher.

Everything about this chassis, including its 64-lb. reduced weight advantage over the Twin Spar equivalent, makes it a better sled for aggressive riders. 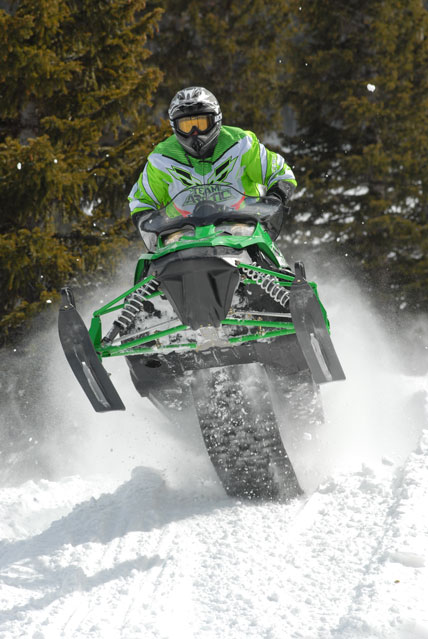 The skis are easily visible and the view off the front of the sled is unencumbered, with no distracting, in-your-line-of-sight plastic.

The suspension action was absolutely spot-on when riding hard, and gave me complete confidence to hit anything I ever encountered on the trail, at any speed.  Kirk Hibbert did the shock calibration for this sled and aimed it at cross-country race action and Junior level snocross. But caution: If all I did was cruise stutter-bump trails at 30 mph, it’s too stiff. 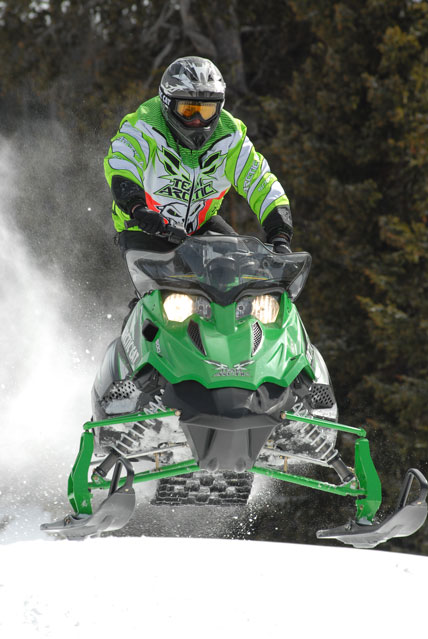 Elements like the rough fit-and-finish of the cowling, the ultra-stiff and wide running boards (with the exposed chaincase and the gnarly traction plates), raspy engine sound (it seems louder than an F5) and the firm seat foam make me feel like I’m on a sled whose purpose is entirely functional. 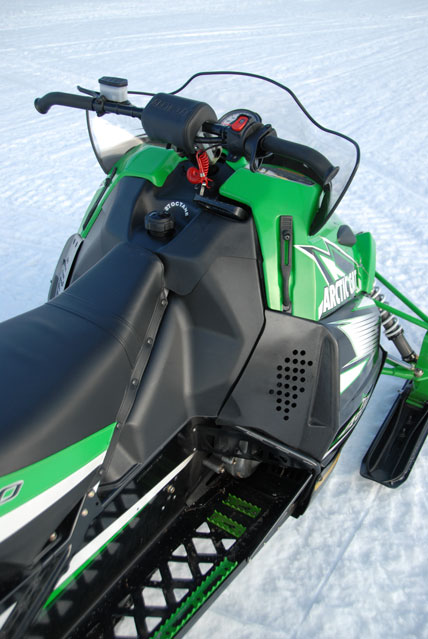 I don’t know if it’s the Wilwood brake or the fact that it’s clamping a jackshaft-mounted rotor, but the braking performance on this machine is exactly what I want, and what I’ve missed since the ZR days. Truly one-finger braking. 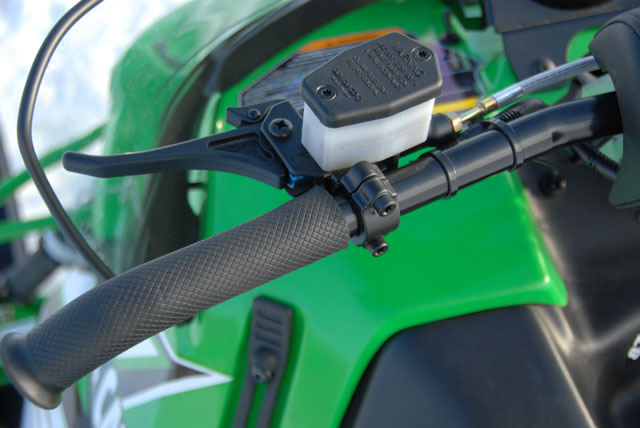 As for the engine… well… please indulge me for a moment.

Last year my everyday sled was an F5, which has the same 85-hp engine that powers the Sno Pro. Three years ago I had a Sabercat 500, also with this engine. Over the past dozen years I’ve had ZR 500s, ZL 500s, Z 440 fanners and the occasional 600-class F/Firecat/ZR thrown in for good measure.

Two years ago I raced the I-500 aboard an F5 and was convinced that, had I raced a 130-hp Sno Pro in the same conditions, it would have scared the hell out of me too frequently to have enjoyed myself.

I also vividly remember the 20-year span from 1990 to today, including the 81-hp 550 liquid twin and 91-hp 580 twin, both of which gave me and thousands of other riders (and racers) all the thrill they were looking for. I remember when cross-country racing in the early 1990s was aboard 65-68 hp sleds, and nobody complained about going too slow.

Clearly, I’m not a rider who demands the highest available horsepower to have fun.

Which brings me back to the Sno Pro 500. For wooded trails and ditch riding, it goes as fast as I personally care to go. Yes, for lakes and the long/straight trails, more hp would be great.

But on the forest trails that constitute much of Northern Minnesota where I ride, I’m certain that I can ride harder and longer on this than I could if it were 160 hp. And I’m willing to bet anyone reading this would see the same result.

At the Arctic Cat media event in Maple Lake – which hosted every snowmobile magazine and television journalist in the business and had available prototype 2010 CFR 800s, F8 Sno Pros, Z1 Turbo Sno Pros and all the other big iron – the most popular sled was the Sno Pro 500. Interestingly enough, it was ALWAYS in the pack, never trailing, despite the VERY high speeds that always define these events. And this was on mostly wide-open trails and ditch.

For riders who have absolutely convinced themselves that anything less than 140 hp is lame and uninteresting, the stock Sno Pro 500 isn’t for you. But for the rider who isn’t beholden to the almighty horsepower, and who likes to ride as hard the last two hours of the day as they do the first two, this sled is the ticket.

Coming in a few days: the final installment of the Sno Pro 500 Series, in which I gather all the available data on the aftermarket options. 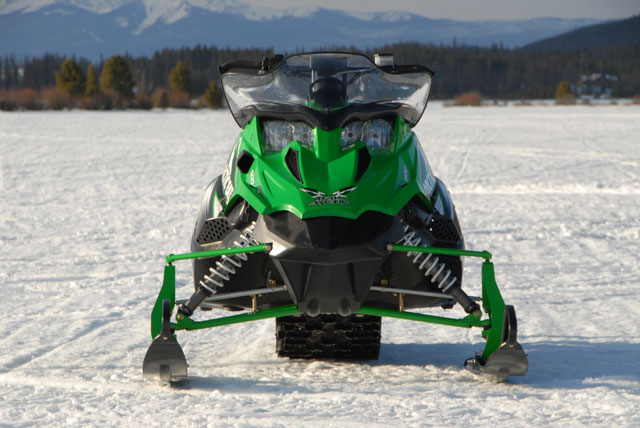