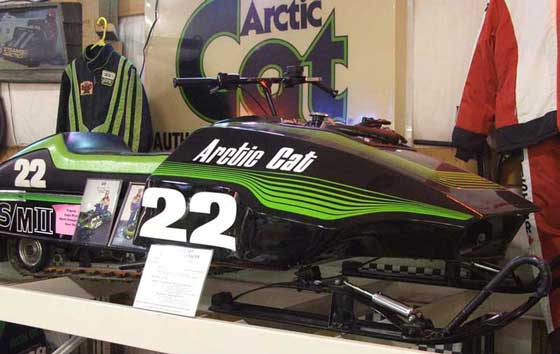 As part of the celebration of the 50th Eagle River Derby, the Snowmobile Hall of Fame in St. Germain, Wis. will over a very special exhibit starting Nov. 1, 2012 and running through March 2013. It will feature historic Derby sleds, drivers, teams, factories and other memorabilia regarding the famous Eagle River Track over the last 50 years.

Here are just some of the historic sleds featured in this special exhibit:

1964 Polaris Sno-Traveler, driven by Charles Robison of Crandon, WI (team mate of Stan Hayes on that historic first Derby.  Stan was the first Derby winner but his sled does not exist any longer).

1967 Ski-Doo with a special motor from Rotax driven to Championship by Duane Frandsen, Pembine, WI.

1996 Mondus MC-4 Yamaha powered racer driven by Scott Mondus, Lakeview, MN.  First Yamaha in WC in 20 years.  Only 3 of these sleds were built and 2 qualified for WC!

In addition to these sleds, several more are expected to be confirmed along with photos, drivers suits, helmets and other Derby memorabilia.  Historic videos will also by playing.

This Derby 50th anniversary special exhibit is the largest single exhibit ever attempted by the SHOF in its 30-year history.