Last weekend the Annual Rum River Outlaw Grass Drags and Swap Meet played out in all its glory, making a pilgrimage to Princeton, Minn., a must-do for thousands of snowmobile fans.

My son Calvin and I were among them.

I think of Princeton/Outlaw as the kick-off to the fall swap and show season. It’s a fantastic event, perhaps my favorite, because it’s well-sized, attracts true hardcore snowmobilers and club members, isn’t a beer-fest, and has a cadence that makes it possible to see everything and talk to people without feeling rushed.

Outlaws has heartily embraced vintage sleds, which are the first sights you see upon entering the gate.

Seeing some of collector Jack Speckel’s Arctic Cat’s is worth the price of admission. 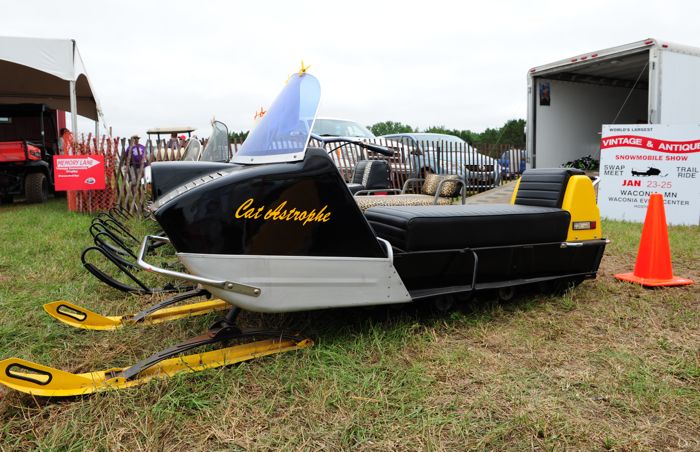 Not sure if this hints at a merger, a lawsuit or a sense of humor. Either way, I laughed.

The first conversation I stumbled into was between Winnipeg I-500 collector Jess Babler (left) and the guy on the right, who believes he has two sleds raced by Polaris legend Dorothy Mercer. 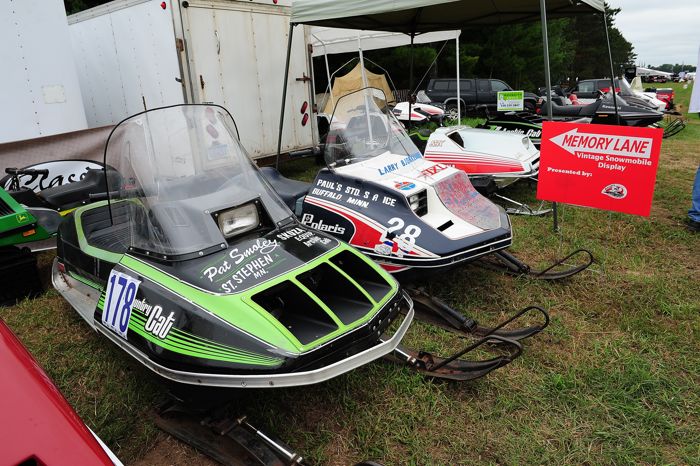 Babler owns of a fleet of sleds that were raced in the Winnipeg to St. Paul cross-country race, like this Cross-Country Cat and Polaris TXL.

Babler recently populated the Snowmobile Hall of Fame in St. Germain with Winnipeg memorabilia. And he’s going to switch the dates of his family vacation in order to witness the upcoming Winnipeg to Willmar I-500.

An Arctic Cat Panther in glorious metalflake… it’s so groovy.

There are SO many cool sleds to be seen at Outlaws. This mint 1982 Kawasaki Interceptor was one of them.

Strolling down the grass lane, Arctic Cat had their corporate booth set up and looking fancy.

Several dealers display at Outlaws, including Country Cat out of Sauk Centre, Minn. These guys were hucking deals all weekend.

Thomas SnoSports of Ogilvie, Minn., makes a big splash at Outlaws, since it’s practically in their backyard.

I spent some time sitting on new sleds and waiting for winter, and then it was time to hit the swap meet which is where some of the best entertainment occurs. As well as some truly great sights.

A couple old Panthers for sale, waiting for restoration.

And another strapped to the roof of a trailer, working as a homing beacon for my eyes. I wonder what other goodies this owner has…

… ahh, yes, another old Panther. And this one was getting a good once-over by the seller. You might as well rebuild a sled while waiting for the turkey to smoke, right?

Not all sleds were in the process of being rebuilt, although many appeared to been recently restored. Case in point: this Arctic Cat Puma and Cheetah. 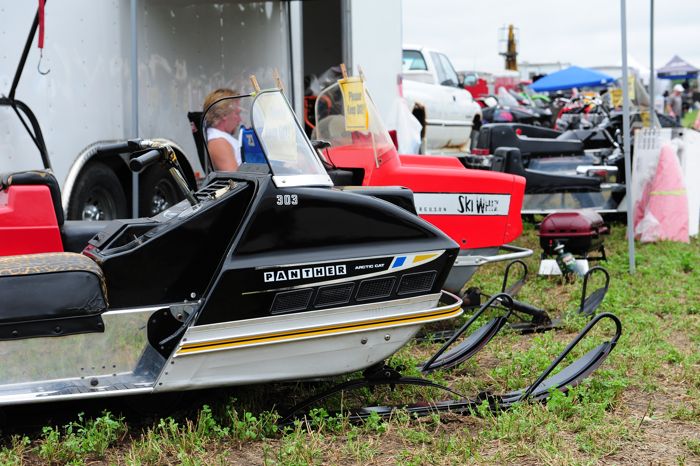 Ditto for this 303 Wankel-powered Panther and my son’s first favorite sled of the day, the Massey Ski Whiz.

My desire to own an Arctic Cat mini bike drew me to these three stunners that were selling for around $1,500 bucks each. They were gorgeous, but out of my price range. 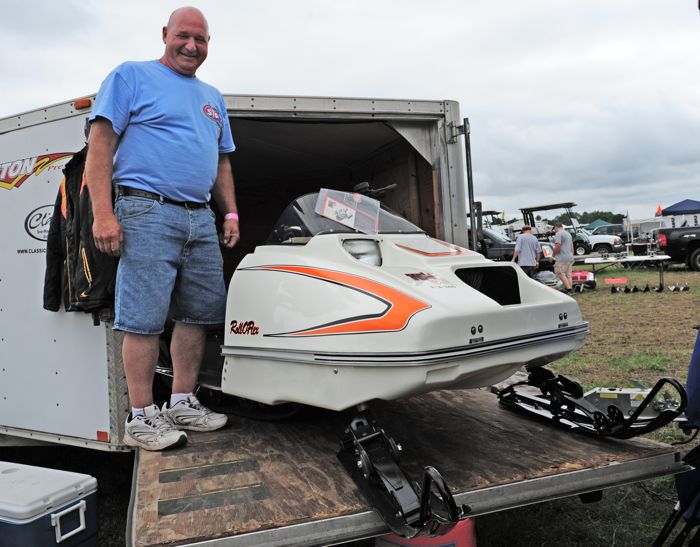 While Calvin was grooving on the Ski Whiz, I took a fancy to this outstanding Roll-O-Flex Wild One, which won Best In Show at the Snowmobile Hall of Fame Classic Sled Round-Up this past spring.

Calvin’s (right) second favorite sled of the day was this Chrysler SnoRunner, which he and Jace (left) imagined were capable of riding EXACTLY like a modern motocross bike, but in the snow.

I didn’t want to burst their bubbles.

It was a blast bringing Cal to a swap. He digs all the old and weird stuff, just like his old man.

Speaking of old and weird, the SnoBlazer was the precursor to the SnoRunner. I actually owned one of these contraptions for a few years. The thing weighed as much as a regular sled, was WAY too fast for its design, and caused a few hernias while moving it around my shop until I finally wised-up and sold the damn thing at Hay Days.

I wonder if this was that sled?

Anyone have a recommendation for a good rust remover?

$75 bucks would have gotten you this Scorpion snowmobile game at the swap. 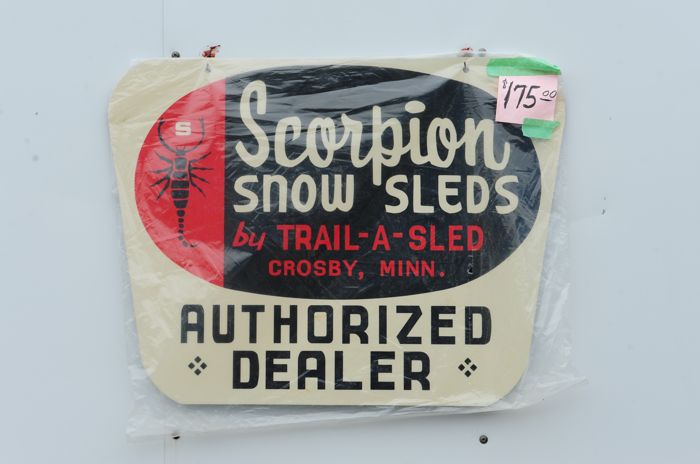 While $175 would have made you a Scorpion snowmobile dealer.

It’s pretty interesting seeing the loads upon loads of old used and NOS stuff for sale at some of these swaps.

I’ll let a bunch of these pix speak for themselves…

I’m not sure what this photo would say, other than, yes; you could buy a crusty old pelt at Outlaws. Calvin bought several, and hopes to have my wife’s fur coat completed by Christmas. 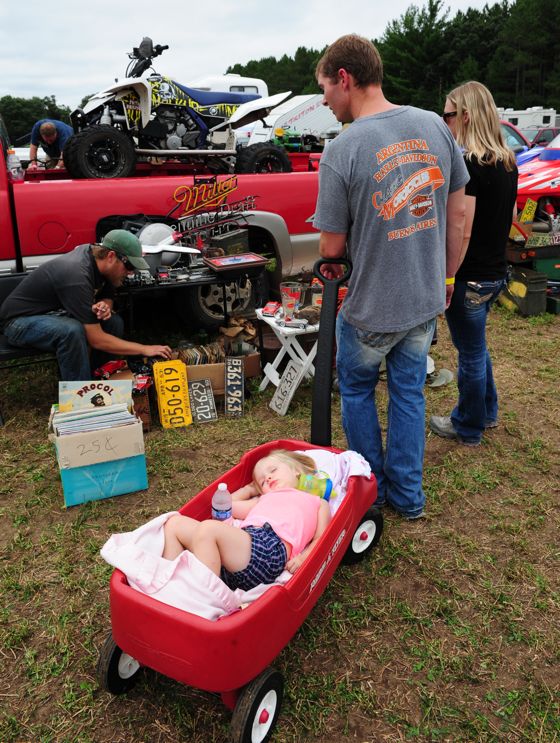 At some swap meets, it’s the adults who are passed out. Just the opposite at Princeton.

Not sure if this was the culprit for the snoozing kids. I hope not. 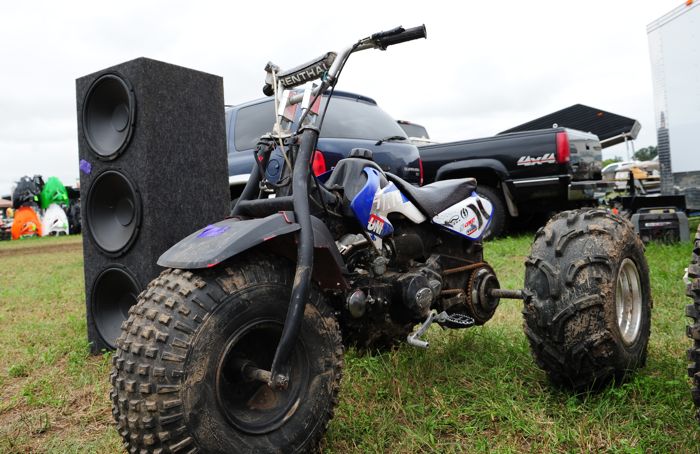 Above all, Princeton and swaps like it are ideal events to hang out, laugh a little and share the culture of snowmobiles.

Pat Bourgeois knows the score. Although he’s an editor of OSM magazine and a contributor to another dozen snowmobile projects, he was at Princeton mainly to soak up the good vibes and bask in the radiance of an Arctic Cat Prowler.

Yes, he was offering free burgers to anyone who bought a subscription to OSM, but that was more for fun and less about working. 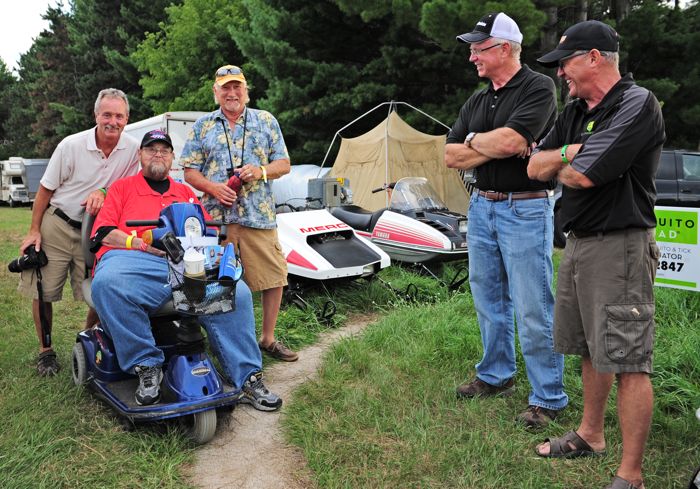 My last stop for the day was to talk to this cast of characters (L-to-R) Former Team Arctic cross-country pilot Doug Oster, his mechanic Steve Tabor, (someone help me with name of this former Yamaha oval racer in the Hawaiian shirt), Doug Hough of Rapid Marine, and Enduro Team Deere great (and soon to be SHOF inductee) Bob Enns.

There were lots of good stories and catching up with this group. Each of these guys has left some mighty big tracks in their careers, and each feels the gravitational pull of events like Princeton.

There is much to do and see during snowmobile swap/show season. And I’m glad snowmobile season is finally upon us.