And it’s still full-on winter where Arctic Cat engineers were testing when I visited them recently, with nearly two feet of fresh snow to prove it.

On this day a crew were calibrating and testing a fleet of machines in preparation for future models.

One such machine was this ZR 4000RR, which has seen some clutching changes since I last rode it in March. According to calibration engineer Bart Magner, the updated clutching has produced a 3-sled length improvement in acceleration over its March state of tune. Cool!

Improvements in bearing materials and venting on the 2014 models brought solid improvements to belt life for most customers this year, yet the team are still working on enhancements for select models.

One such enhancement I saw on several sleds is a new side panel vent kit, which brings more cool air into the drive system to reduce operating temperature. This will come stock on several 2015 models (look for story here in the coming month or so) and is also available as an accessory (P/N 6639-817).

Other engineers were performing additional data recording and calibration testing. Here Dave Sabo (right) updates a ZR6000 with a new fuel map that will be tested by Bart Magner (left).

This constant refinement is a weekly ritual during the riding season. As Sabo said to me, “We’re always tweaking for improvements because there’s always opportunity to get better.”

Thanks to a wonderfully long and snowy winter, these guys are happy with the gains they’ve made.

Andy Olson was another Engine Group engineer working on  setting up a ZR6000 with a data recorder.

Arctic Cat has fully embraced the benefits of data acquisition when evaluating all aspects of snowmobile engineering. 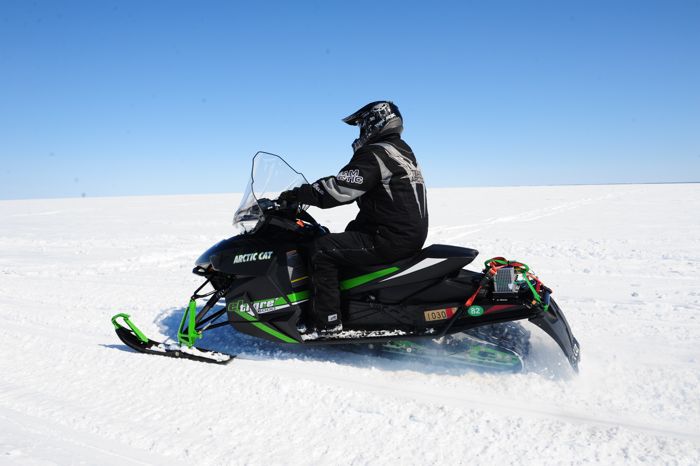 A few minutes later Olson was on the sled and performing a test run.

The pattern of the day was for engineers to make a change on a machine, test it, and then come in for an informational download. Of course, the download involved computer hard drives AND human hard drives. 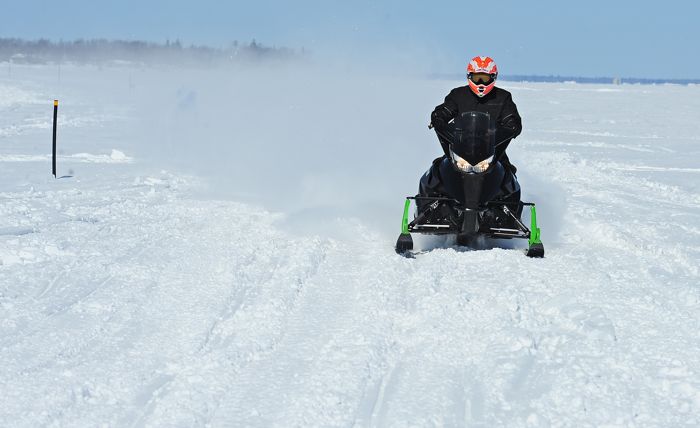 Some of the tests involved only one or two accelerations, while others involved rides of several hours. I saw one test in which a Bearcat towed a machine at various speeds, and another in which an engineer ran for long distances at partial throttle positions.

Each is part of a comprehensive effort to match the various conditions and riding styles these machines will see once they are production sleds.

On one of the more adventurous test rides last week, a group found some REALLY deep, untracked snow.

Bart Magner used his helmet cam to record Andy Olson busting through the powder on a ZR6000, followed by Magner’s maniacal laughter when Olson gets stuck.

Andy was all smiles though!

And Bart proved that he too was fully capable of burying a ZR6000. He claimed this was only the second time in his career in which he’s been stuck. I don’t believe him for a second.

Back inside one of the engineering trailers, Mike Larson waits for Dave Sabo to finish downloading the data from another test run.

More data recorded, more test runs… repeat. And so another day goes by for this crew of Arctic Cat engineers. Other crews were testing at a different area this day, while the mountain team were making runs out of the company’s R&D test facility in Idaho.

It might be springtime for most people who are reading this, but it’s still winter and snowmobiling season for Arctic Cat.