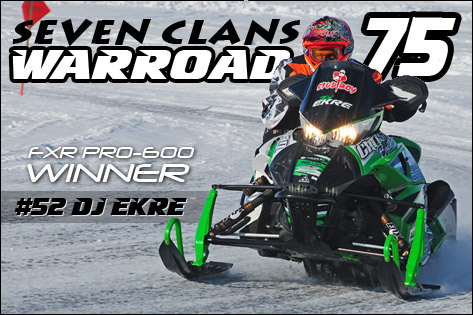 Leaving nothing but table scraps for the competition, Team Arctic marched through last weekend claiming 30 class victories in two days of USCC cross-country, a huge win in Pro Open at the ISOC snocross national in Elk River, Minn., and six victories at the RMSHA hillclimb in Afton, Wyo.

The all-conquering cross-country performance unfolded in Warroad, Minn., during the final weekend of USCC competition during the 2012 season. With two separate events during the weekend, Team Arctic had double the opportunity to dominate.

The Arctic Cat/Christian Bros. Racing juggernaut continued their claim in Pro class competition, with Brian Dick and D.J. Ekre claiming Pro 600 and Pro Open on Saturday, followed by Ekre winning Pro 600 on Sunday. Ryan Simons was on the podium in all four events during the weekend to claim his second consecutive USCC Pro 600 Championship, while Ekre took the Open Class Championship.

In addition to conquering the pro classes, Team Arctic unleashed an all-class beating of historic proportions. Eight Team Arctic racers scored multiple class wins, while there were 19 different winners. And of the 30 total class victories during the weekend, 14 were full podium sweeps by Team Arctic.

“We’ve been highly-successful in USCC cross-country racing for many years, but the team’s performance in Warroad reached a new level,” said Mike Kloety, Team Arctic Race Manager. “I believe the word “dominate” gets used a little too loosely sometimes, but it’s the only way to describe winning 30 out of 39 total races. Arctic Cat is immensely proud of all our racers, crew and the USCC staff for a truly outstanding season of competition.”

Team Arctic’s hillclimb contingent captured six class victories at the RMSHA event in Afton, Wyo. Proving the ability of the M8 HCR in the ProClimb chassis with wins in the big-inch classes were Kyle Tapio (with two wins), Nels Tapio and Trace Tupper. They were joined on the top step of the podium by Sid Archibald and David McClure.