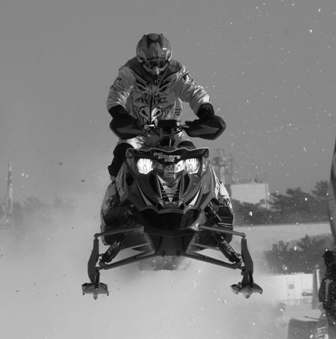 A Winning Start to the Regional Snocross Season

Thief River Falls, Minn. (Dec. 9, 2009) – The first snocross race of 2009-2010 season is in the history books, and with it a return to Team Arctic’s winning tradition. With the postponement of the ISOC National Series until Dec. 12-13, a Regional ISOC race at Quadna Mountain Park (QMP) in Hill City, Minn., served as a tune-up for many Team Arctic snocrossers. Eight class wins, including three of four Pro class victories, proves that only fine-tuning is needed to dominate the rest of the season.

Although many familiar Team Arctic racers stayed home, a handful of top National and Regional competitors were all the team needed to win the biggest classes. With a victory in the National Pro Open class and third in National Pro Stock, first-year pro Dan Ebert proved he’s ready to win at the highest level. His teammate Kyle Pallin, a Semi Pro on the National circuit, won the Pro Super Stock final, while Matt Pichner and Cody Thomsen went one-two in the Pro Open final.

Racers who normally compete in the National Series are required to bump up to the next category at Regional Events, which is why Pallin, Pichner and Thomsen were competing in the Pro classes rather than Semi Pro.

Winning finals in all major categories answered any questions about whether the new 2010 Sno Pro 600 race sled was as formidable as it was the previous season, and what fans should expect from the team.

“We believe we have many of the top racers and that our Sno Pro is a top sled,” said Team Arctic Race Manager, Mike Kloety, “But there’s always a question of what to expect at the beginning of each season. Our success at QMP proved that we’ve hit our marks for both talent and equipment.

“Two of our new racers, Paul Bauerly and Kyle Pallin, came from another brand and showed an immediate, marked improvement. With all of our top racers ready to do battle at the Spirit National this coming weekend, we’re confident that Team Arctic’s winning tradition will prevail.”