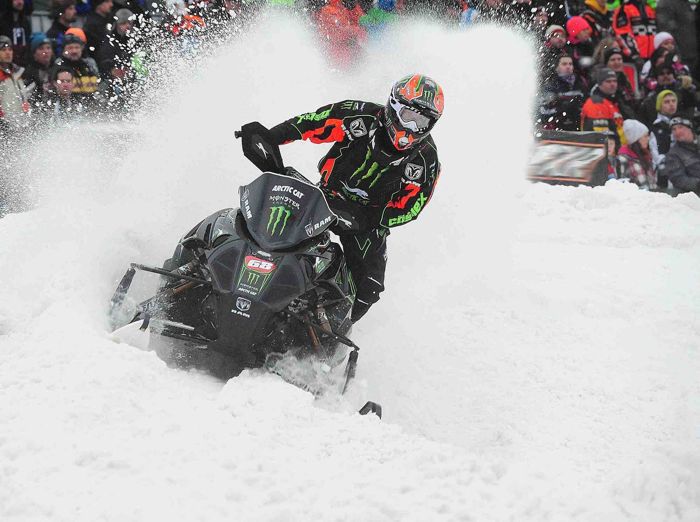 Tucker Hibbert delivered a historic performance in Duluth, Minn., leading a Team Arctic charge that dominated the first ISOC National Snocross race of the season and left the competition seeing green. The numbers tell the Team Arctic story at Duluth: Victory in nine of 15 finals; 22 of 45 podium places; and podium finishes in 13 of 15 classes.

“That was a remarkable performance that must rank among the very best in the 22-year history of the Duluth snocross opener,” said Mike Kloety, Team Arctic Race Manager. “Our teams and riders came prepared, practiced and piloting the 2014 Arctic Cat ZR6000R Sno Pro race sled. That’s a potent combination that made a powerful statement at Duluth, setting what we hope is a pattern for the rest of the season.”

Swedish snocross sensation Marica Renheim served notice that she’s the one to beat in the Pro Am Women class, delivering an emphatic win in the final for the powerful Christian Brothers Racing team.

Of all the success enjoyed by Team Arctic, it was Tucker Hibbert who produced the most remarkable performance of the weekend. In the first of two Pro Open finals, Hibbert lapped the entire field in what historians are calling the most dominant victory in the history of professional snocross racing. And he nearly did again in the second Pro Open final, lapping all the way up to third place.

“I’ve seen many dominant performances by Tucker and (former Team Arctic racer) Blair Morgan over the years, but I’ve never seen anything like that,” said Kloety. “And nearly as exciting for us is the strong return of Cody Thomsen, who took second place behind Tucker in the first final, as well as Logan Christian, who finished just off the box with a fourth and fifth for the weekend.”

Team Arctic snocross racers head to Bessemer, Mich., on Dec. 6, 2013, for the second round of the ISOC National tour.