Winter here in Minnesota came to an abrupt end last week, as an 80-degree swing in temps and highs in the upper 60s fairly destroyed what little snow had accumulated in the past few months.

But there WAS some late season snow still hanging on in the Gunflint area of Minnesota’s North Shore.

So with my son on spring break and my friend Tom Rowland always game for an adventure, on Tuesday we attempted what might be our last ride of the season.

Normally a ride that would include a bunch of cohorts, this season-ender came together so quickly (and with enough uncertainty about conditions) that it was just the three of us.

We’d heard that the Gunflint area had snow, but that trail conditions were marginal at best.

Knowing that one man’s “marginal” can be another’s “epic”, we temped fate to see if we could squeak one more ride out of the winter that wasn’t really winter. 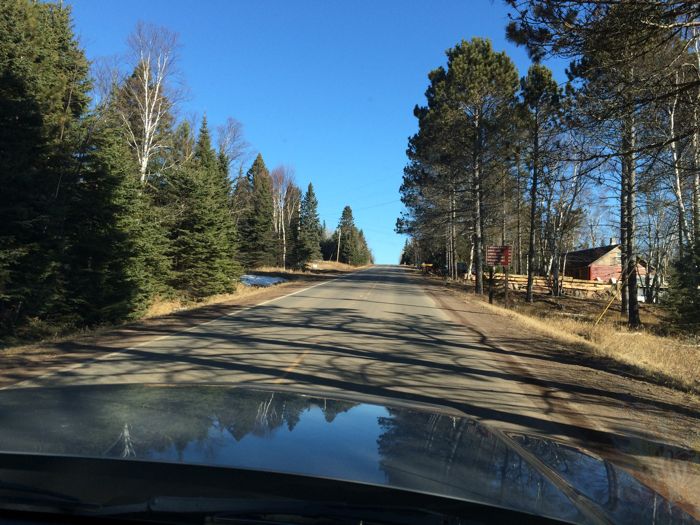 Our gamble was the 4-hour drive north. If it was going to be a bust, the only loss would be time and gas money.

Turning off of Hwy 61 onto Cty Road 2 in Tofte, Minn., the road inland and up the hill showed almost zero snow. But Minnesota snowmobilers know there’s a ridge that runs along this shore whose elevation brings colder temps and more snow than what occurs along the big lake.

Add to the mix heavy forests that shelter from the late winter sun melt, and you have a unique area that gets more snow and keeps it.

We were crossing our fingers and hoping for the best. 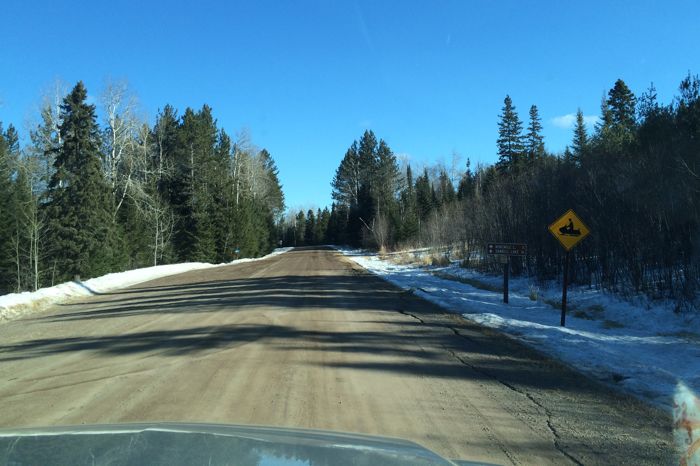 But it was clear that a week’s worth of melting had done a serious number on it. And on this Tuesday the temps were forecasted to peak at 30 degrees F, which meant that what snow did remain would be rock-hard. 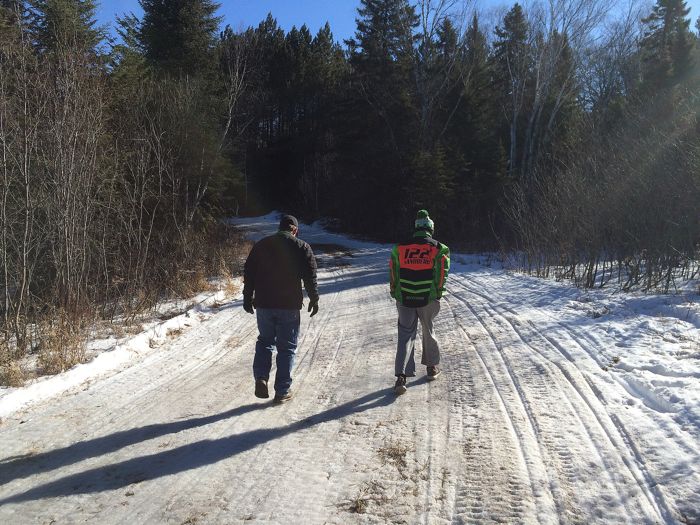 We got out of the truck and walked up the trail 100 yards, just to see if we should unload or head back home.

I won’t lie: the trail surface was more ice than it was snow. A gaze up the trail showed a fair amount of dirt.

In a normal year, we might have chalked it up to a good drive in the car and headed back for home. Hell, we probably wouldn’t have ventured out in the first place.

But this hasn’t been a normal winter, and we were bound to get in a few more miles rather than throw in the towel. 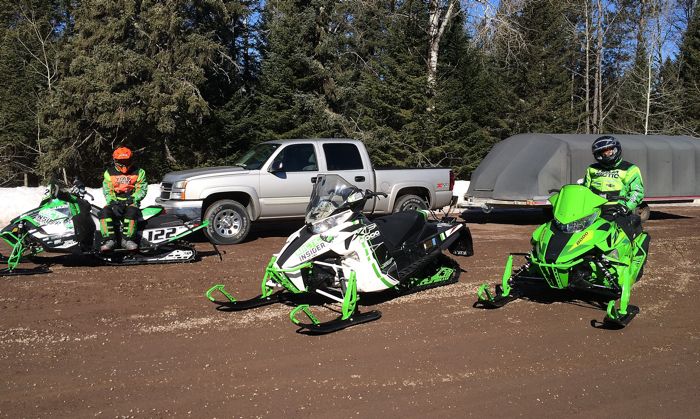 So we donned our gear, fired up the sleds and let our adventure begin… 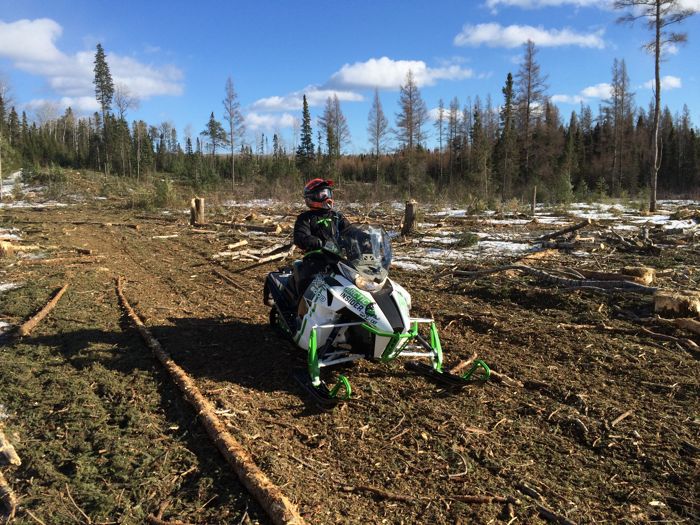 …And we rode 113 miles through this kind of crap.

Actually, I staged this photo in a recently logged area, much to the confusion of my son Cal who shot the photo. 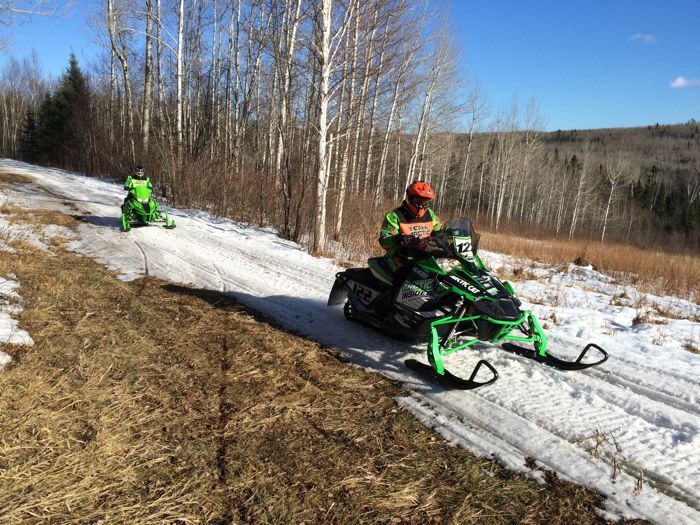 This is actually a representative photo of the WORST of the conditions we experienced as we rode north towards the Gunflint Trail.

Yes there was grass and dirt, but there were always sections of continuous snow so that you could avoid nearly all the brown stuff. 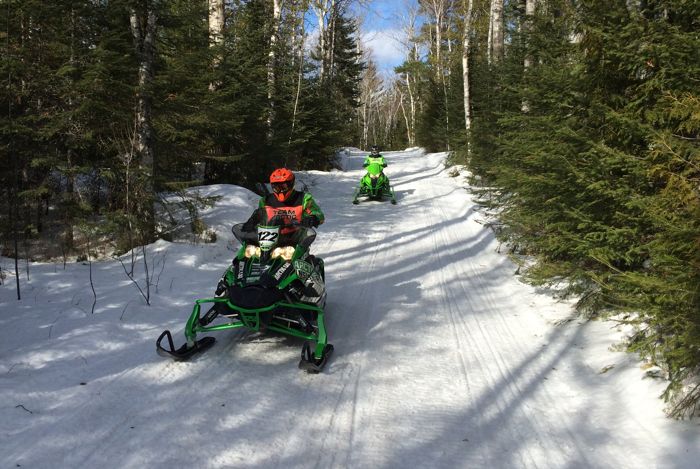 In the woods, the trail still had decent snow, er, ice cover. And the further north we went, the better it got. 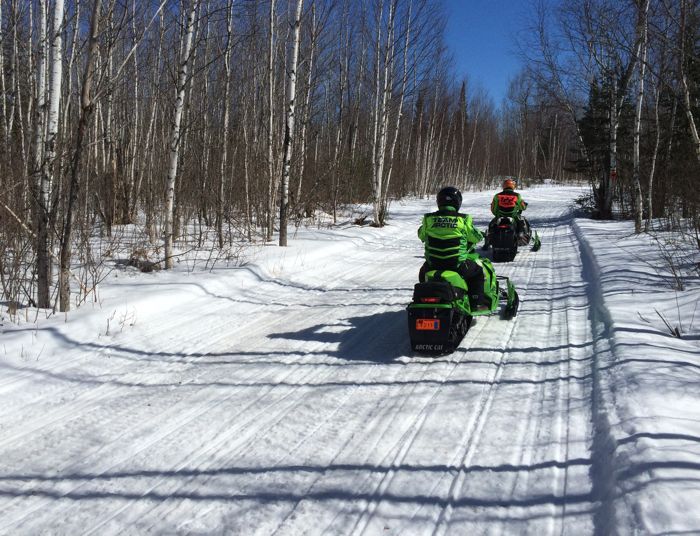 Pretty dang good conditions for riding after a week of temps in the 50s and 60!

Our one and only challenge was ice-like condition of the trail and the difficulty getting snow on the heat exchangers. If it had been 40 degrees on this day, the snow would have softened and we’d have been fine. But with practically no soft snow, we had to hit every available patch of untouched snow and roost the track to get into the soft stuff.

I made a mental note to install ice scratchers on my sleds before next season. 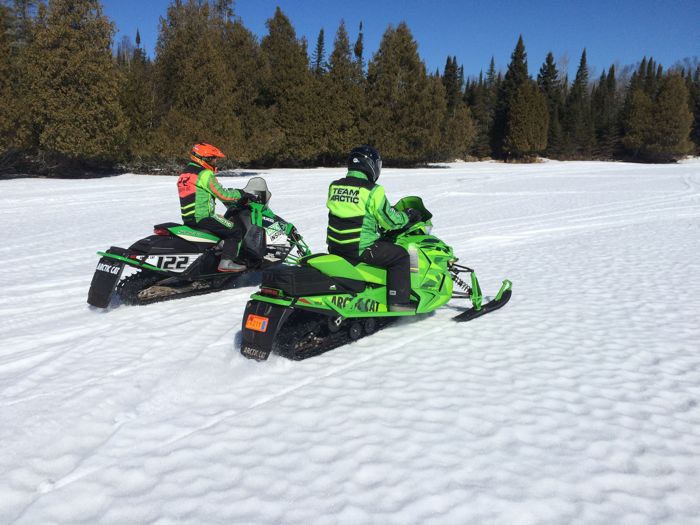 We ventured out onto one of the lakes visible from the trail, but its surface was just as hard. 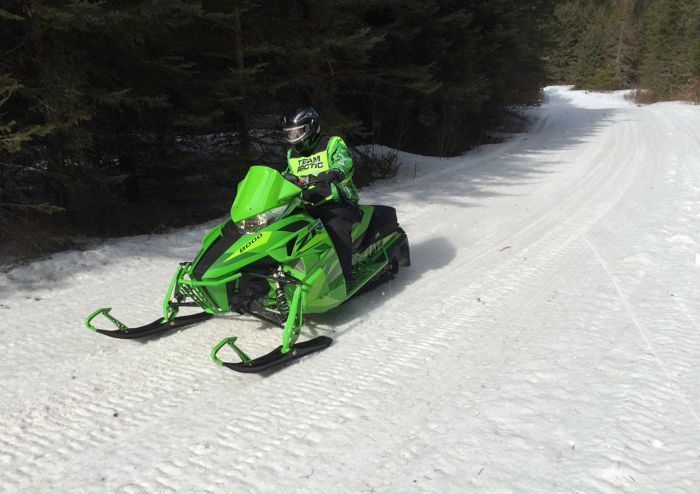 Tom Rowland had just gotten in some 2016 Arctic Cats to his dealership, Thomas Sno Sports, the day prior. His crew set up this ZR 8000 Limited and Tom was more than happy to get some test miles.

I’ll let Tom add his comments about the sled (if he wants).

We vered off the North Shore trail and onto the Expressway trail, heading further inland. The Expressway was fantastic, with very few dirt/grass spots. 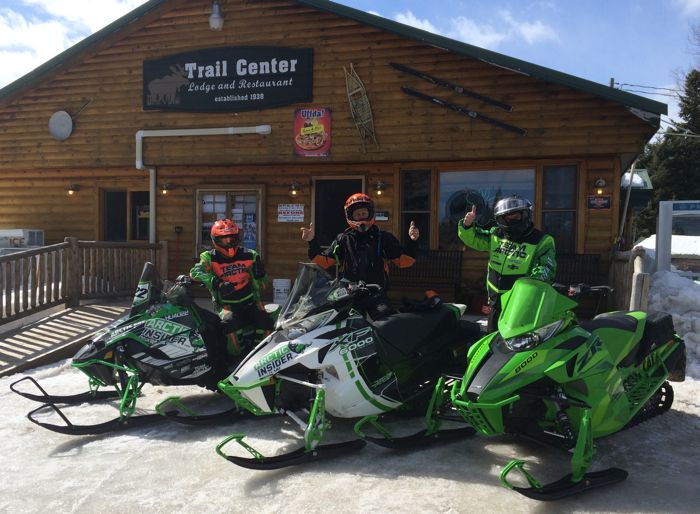 We didn’t really have a destination (other than lunch). We opted for an old favorite: Trail Center. It’s a place my family visits pretty regularly, both in winter and summer. Fantastic food, super cool atmosphere and 91 non-ethanol fuel. 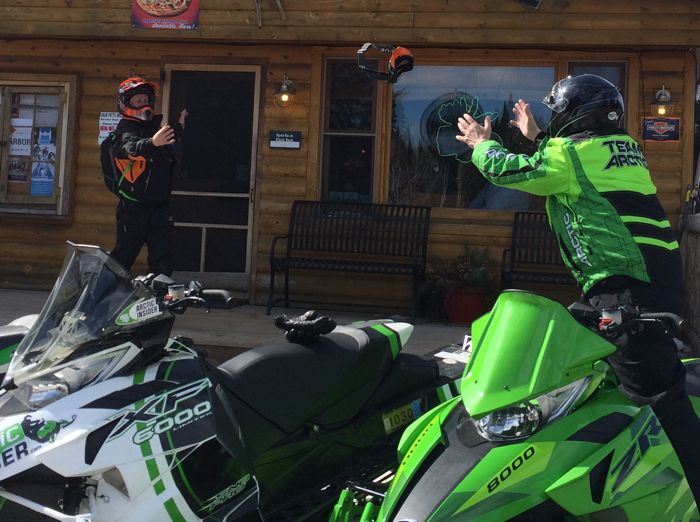 After watching some recent snocross races, I learned from watching the 120-class racers that you can further endear yourself to the crowd by throwing your goggles to some random person.

Since Tom was the only “crowd” hanging out front of Trail Center, I threw him my goggles. Now he’s my biggest fan. 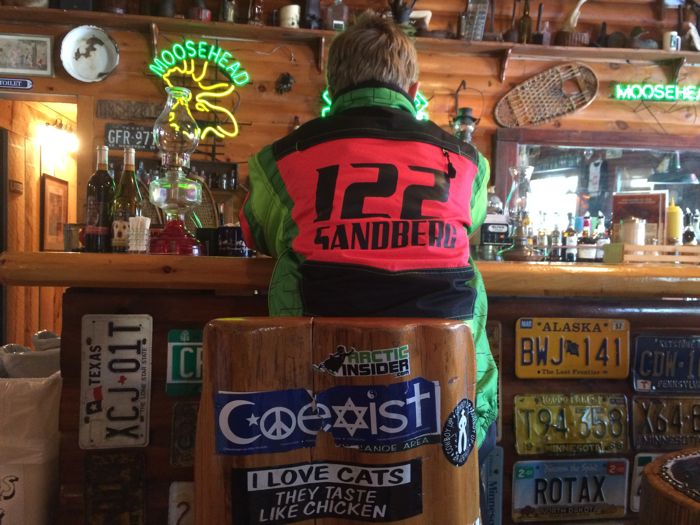 Inside, Cal pulled up to the bar and coexisted with the surroundings. Then he wolfed down a massive hamburger and malt. After that culinary delight, it was time to head back for home. 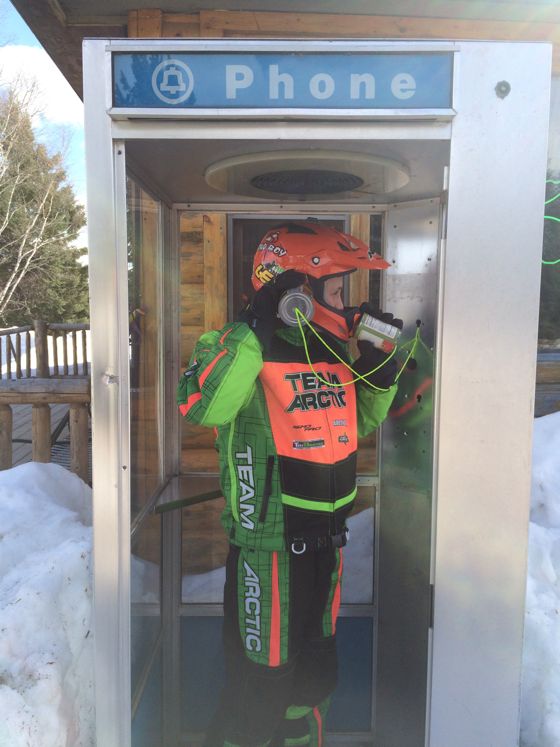 Cal called home to let mom and sister know that we were okay. 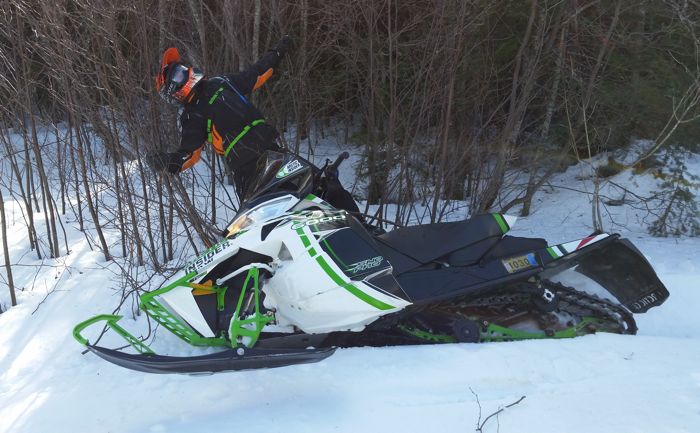 Not long into our ride back to the truck, I hucked a massive move and found myself stuck in the pucker brush.

Tom shot this photo and then gave me back the goggles that I’d thrown to him. 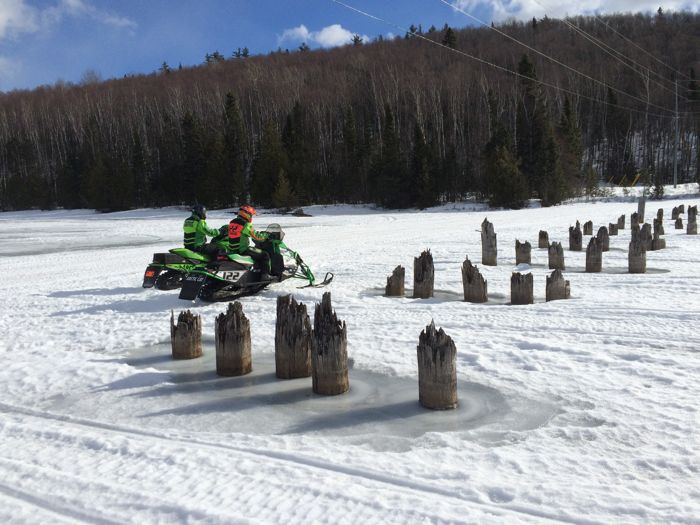 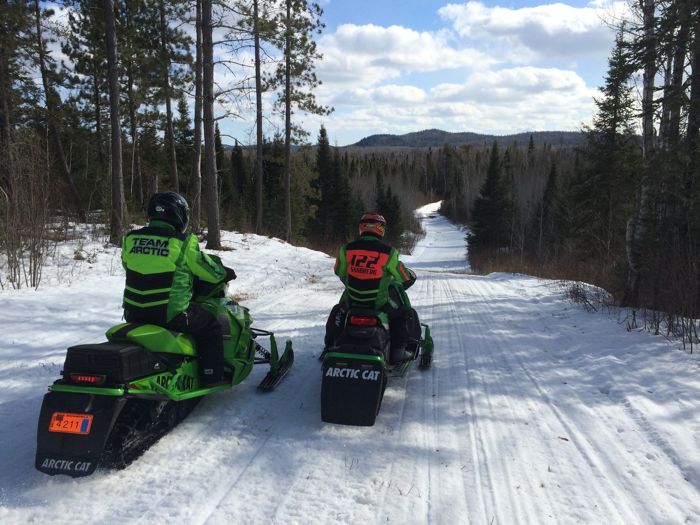 The money shot of the day, highlighting the white ribbon of trail meandering around the sort-of mountains in this area.

With the temps in this area hovering around 30 for highs this week and into next, I expect this snow/ice to stay for a while. If it gets a blast of 2-3 inches, I’ll head back up for another day of riding. If not, I’m content with this being my last ride of the season.

No, it hasn’t been a great snowmobiling winter in Minnesota, sadly reflected by my sled’s odometer. But the miles that I have ridden have been fantastic and enough to tide me over the summer.

The silver lining to it all is that I’ve learned that fun, worthwhile snowmobiling is possible in far less snow than I used to require. And I relearned for the umpteenth time that, when deciding whether or not to take a chance on a ride, to go. Always GO! 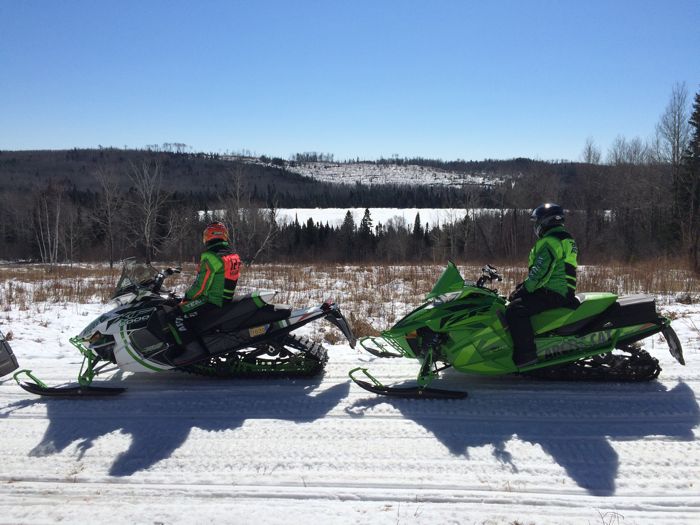