The Winnipeg Returned: Tales from the 2017 I-500 Cross-Country

The 2017 USXC Winnipeg-to-TRF-to-Bemidji I-500 returned this past weekend, with a new generation of racers writing their names in a new chapter of this magnificent race.

Bitter cold, rough ditches, river, trail…it delivered three grueling days of competition that more than lived up to its legend.

Eighty-two brave racers took the green flag on Day 1 in Winnipeg, hoping to make it to that day’s finish in Thief River Falls, Minn. Approximately 16 didn’t, with another handful who did finish but suffered enough frostbite that they didn’t start the second leg, which consisted of three laps around the TRF area.

Another 30 racers, comprised of Junior, Vintage and Classic IFS categories, entered the fray for the final leg from TRF to Bemidji.

I talked with a few dozen racers during the event, and the consensus was that the ditches from Winnipeg to the border were brutal beyond belief, no thanks to hard, windswept drifts of various angles that sent sleds careening in all directions. From the border to the final finish line in Bemidji, the racers experienced a fantastic course, ideal weather (blue skies and sunshine) and clockwork-line precision by the USXC crew. In particular, the final leg from TRF to Bemidji was a favorite thanks to the rolling hills, 25-miles or so of forested trails and, of course, the emotion of making it to the finish line on Lake Bemidji.

And emotional it was indeed, as this race challenges and rewards its participants in ways that only long distance, multi-day cross-country events can.

Enjoy some photos of this epic event. 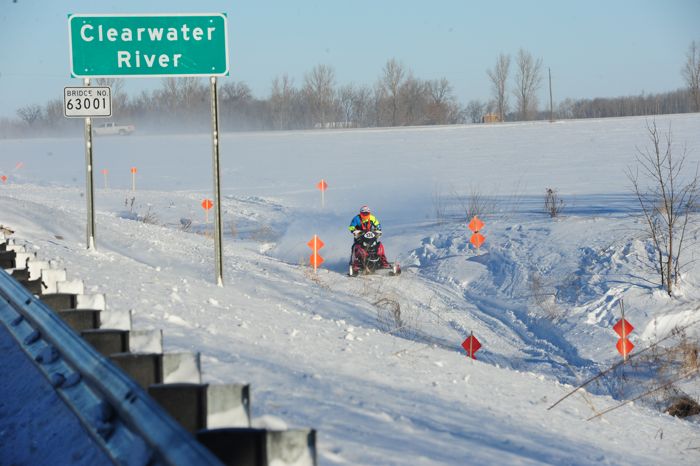 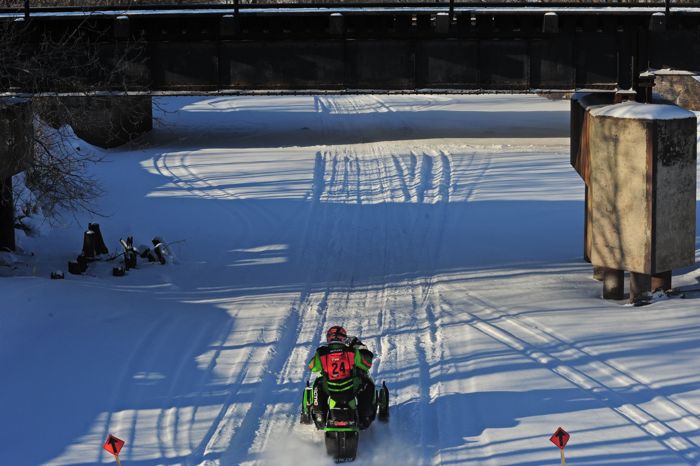 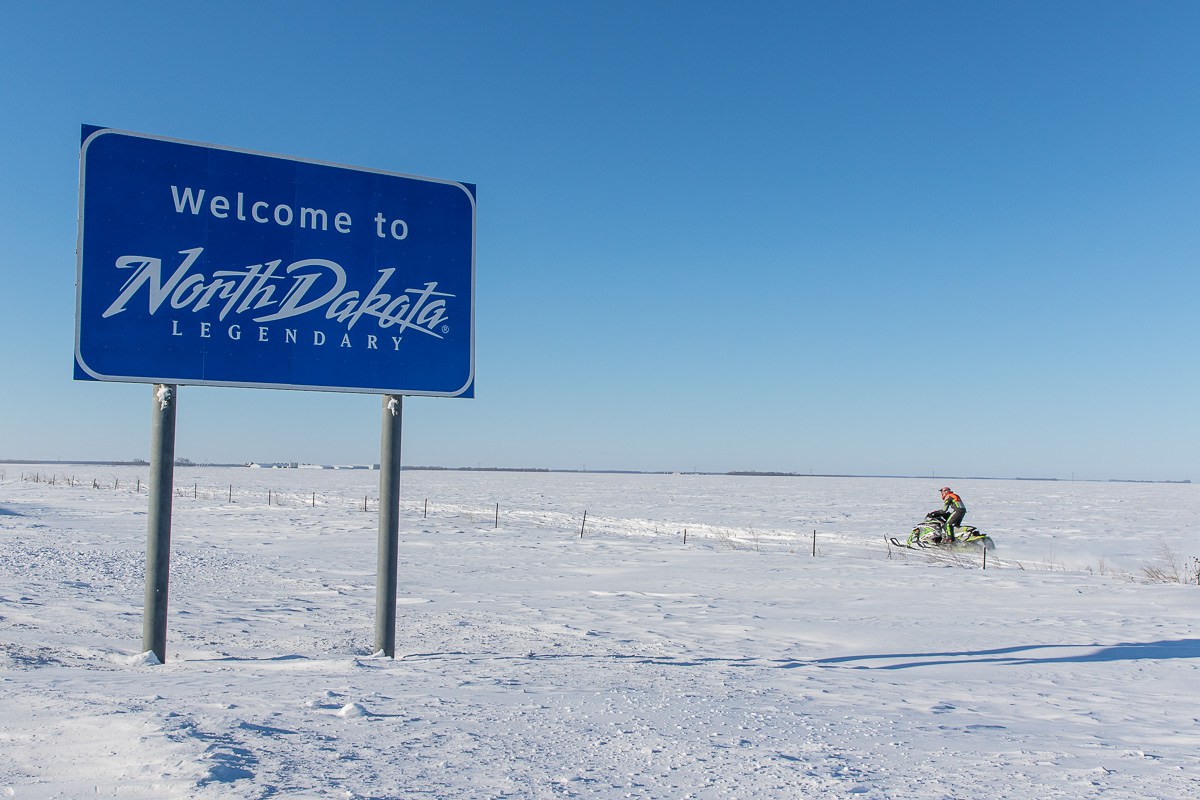 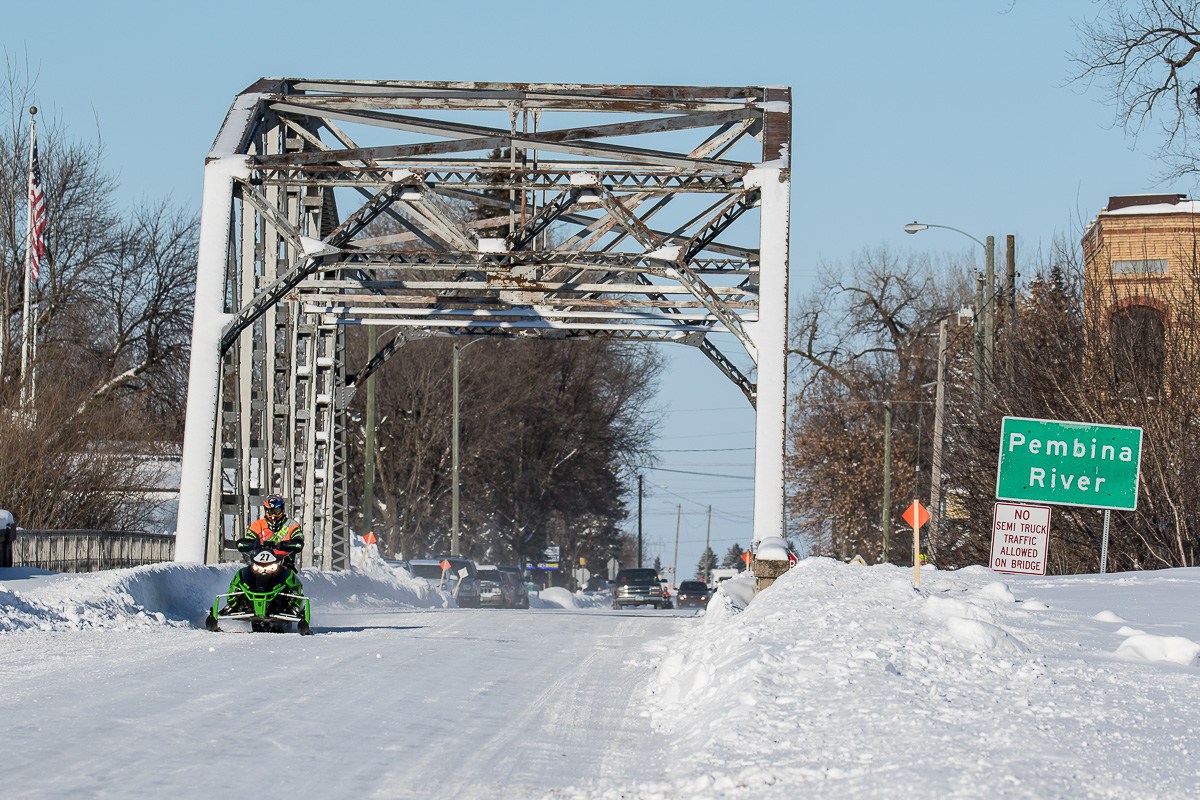 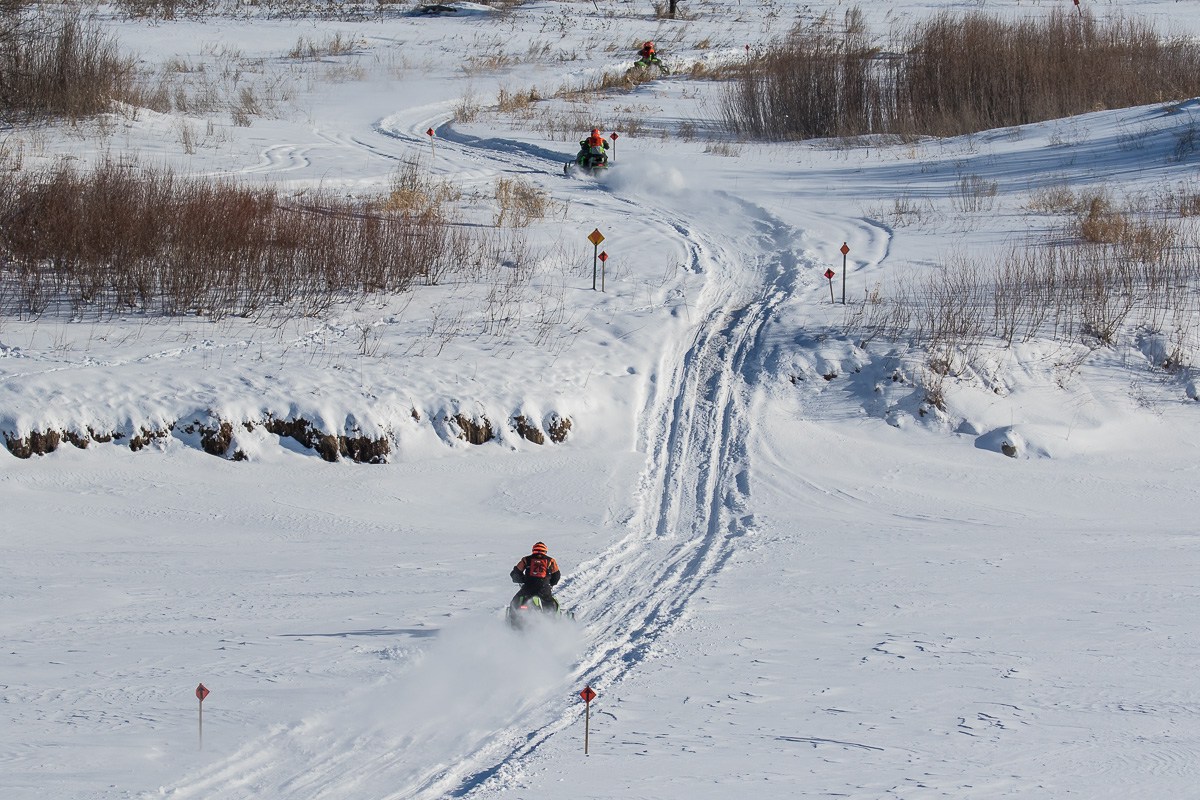 Photographer Aaron Kennedy has the magic eye for capturing the beauty and context of cross-country, as evidenced by the three images above. Jump to his website to see a slew of similar cool images. 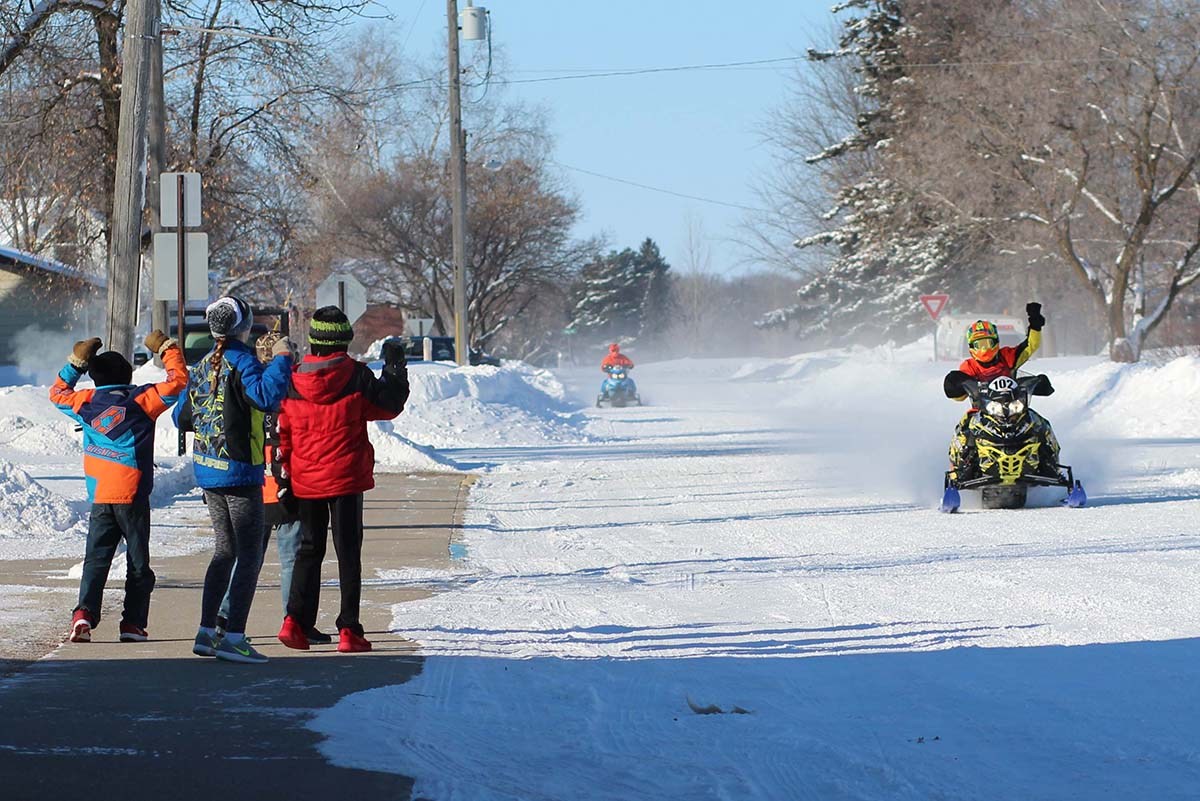 Emily Wicklund absolutely nailed it with this shot of school kids greeting racers coming through Lancaster, Minn., just like how they did it back in the 1960s and 70s. 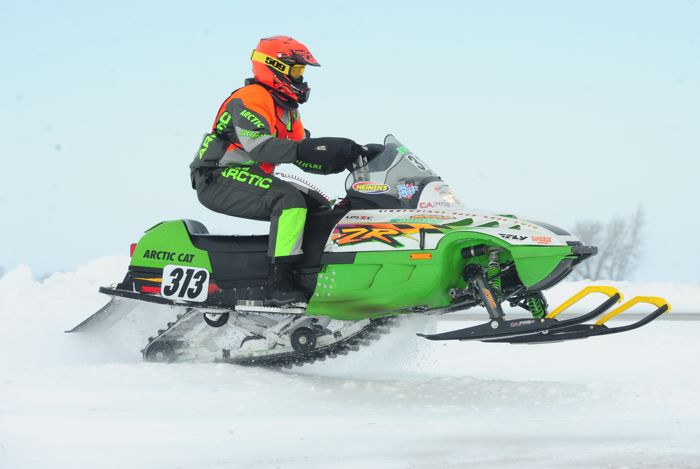 Team Arctic racers enjoyed a fun and successful I-500, capturing 9 wins (out of 13 classes) and 24 of 39 podium finishes.

Four of those class wins came from the Brown family, with dad Brian (above) taking the two Classic IFS classes on his ’98 ZR. 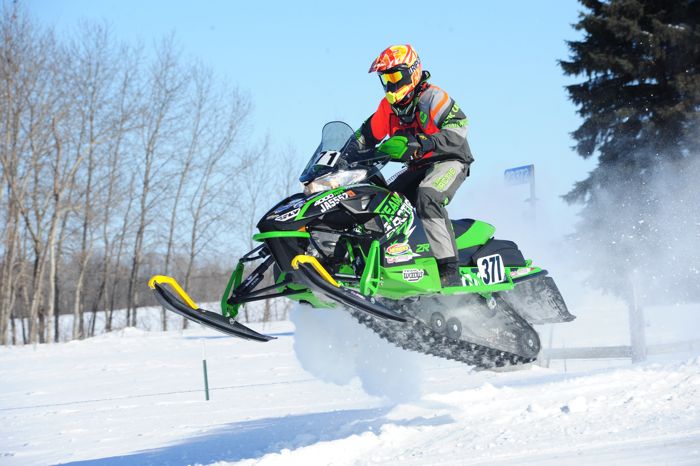 The other two Brown-family wins came from son David, who won both Expert 85 and Sport 85 in convincing fashion. I’ve had the great fortune to watch several generations of racers rise through the ranks. At just 15 years old, David is one of those very special drivers with that little something extra in both the talent and desire departments. If he sticks with snowmobile racing, I’m on record as saying he will someday be the overall winner in this race. 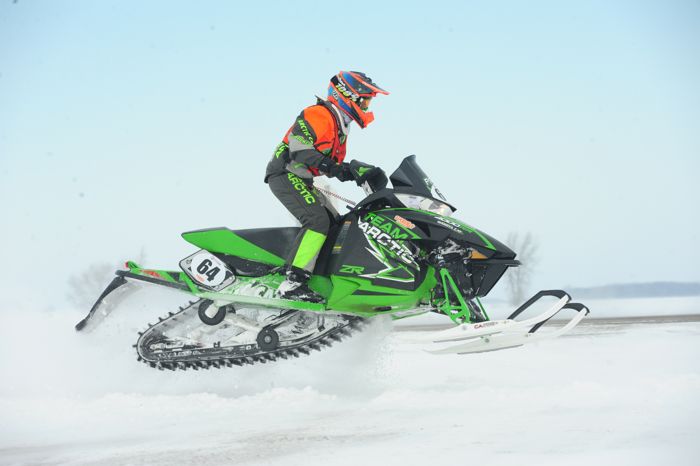 Andy Pake is another talented racer. He edged out Blaise Potucek to take the win in Jr. 12-17. 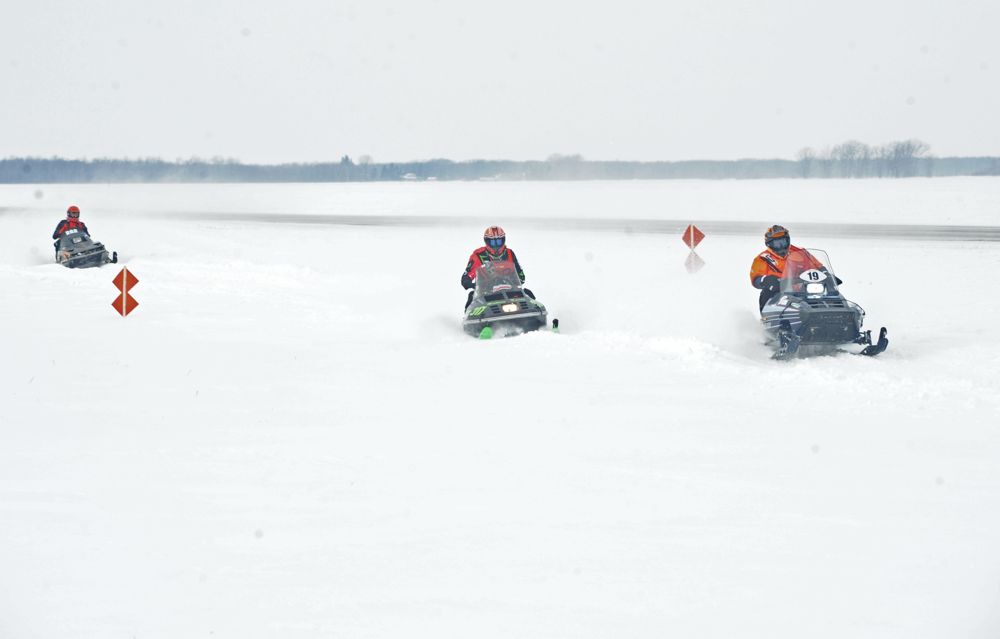 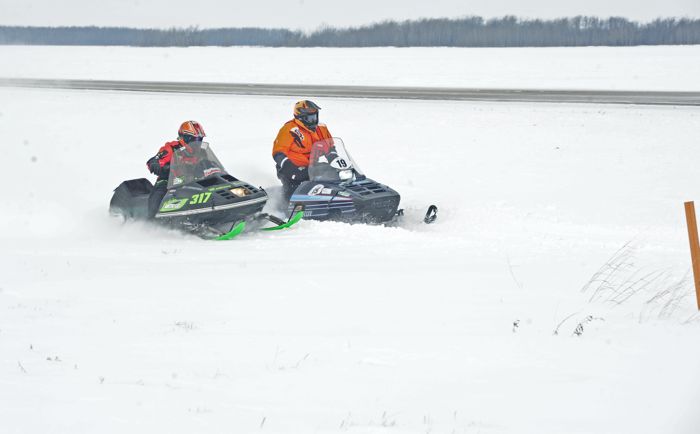 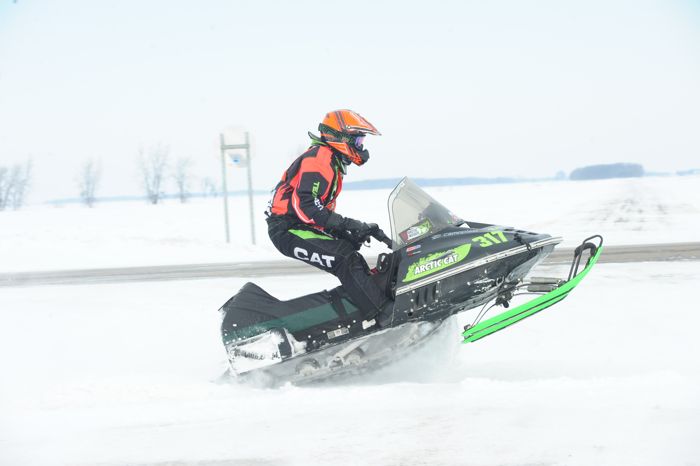 The three photos above show the fiery determination of Mike Mattson upon seeing me standing in the ditch with a camera.

With the hopes of stardom in his eyes, he puts the pin-it-to-win-it pass on Mark Cobb and then gives wings to his ’79 Cross-Country El Tigre en route to winning the Vintage class. Awesome job Mike!

By the way, a huge shout-out to Mike Cobb, who raced his 1980 Polaris Indy ALL THREE DAYS in this year’s race (the Vintage and Classic IFS classes only officially ran the third day) and finished! Very cool. 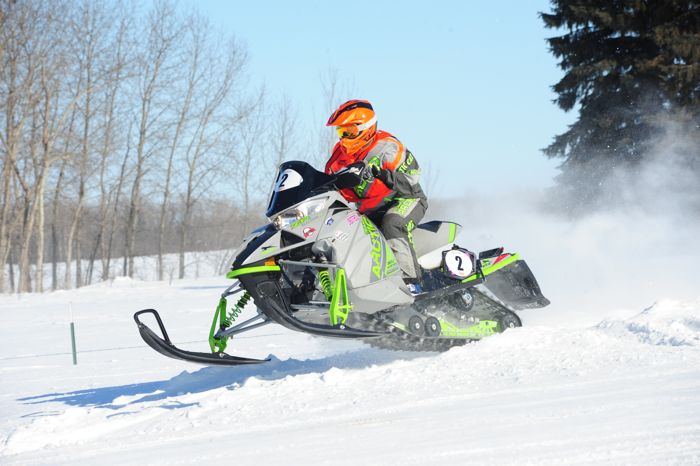 It was just a matter of time before Savannah Landrus was going to win in the Pro Women’s class. Doing it at the I-500 made it all the more sweet. She held off 8-time champ and Team Arctic teammate Jolene Bute to notch her name in the record books. 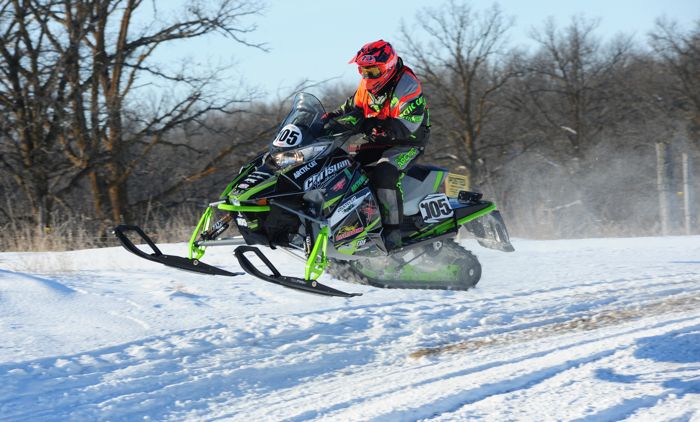 Ryan Trout is having the kind of year that most racers could only dream about, logging wins in the Semi Pro class at all but one USXC race so far and taking third in the Soo 500 enduro a week prior to the I-500. He entered both Pro and Semi Pro classes at the I-500 and then proceeded to finish sixth in the former while handily winning the latter. I’ve seen his mom and dad with proud, happy faces at many races over the years, but they were absolutely GLOWING at the I-500! 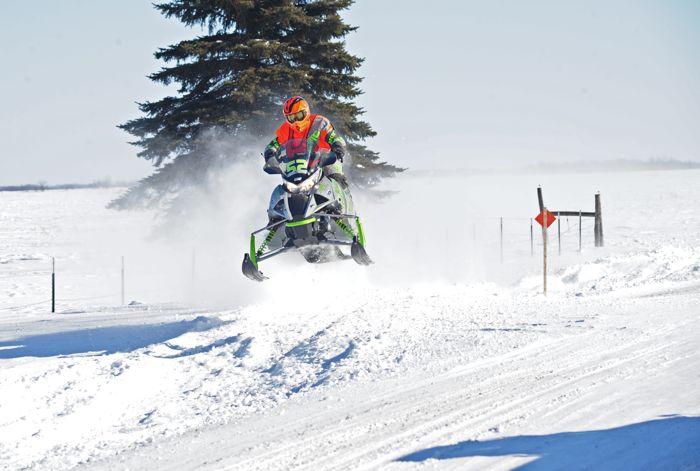 In the Pro class, Re Wadena delivered a Day 1 ride that put him into the lead, 16 seconds ahead of Ross Erdman and 2 min. ahead of Zach Herfindahl.

“I loved the ditches in Canada,” remarked Wadena, who clearly had ‘er pinned on a day that most others had chosen to survive.

Wadena stayed sharp over the next two days to finish third overall. 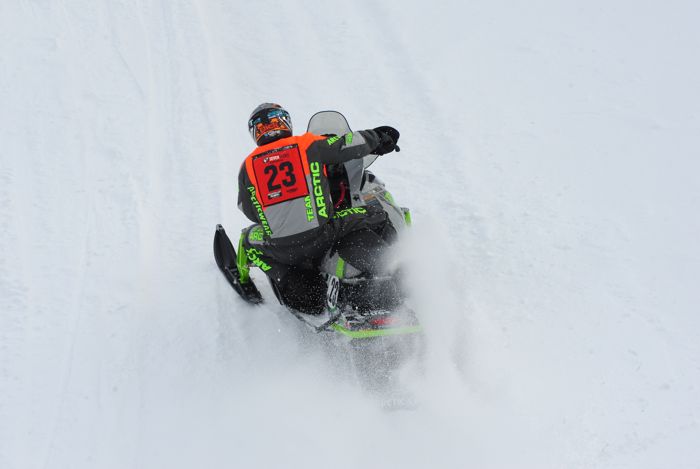 Brian Dick came into this year’s race as the defending I-500 champ, having won the 2014 edition. Unfortunately for him, he also came in with a broken/separated rib, which affected how hard he was willing to hit the several hundred ditch approaches that dotted the 525 miles from Winnipeg to Bemidji. Despite the setback, Brian rode a pace that only four others could beat to finish fifth overall. Dang impressive. 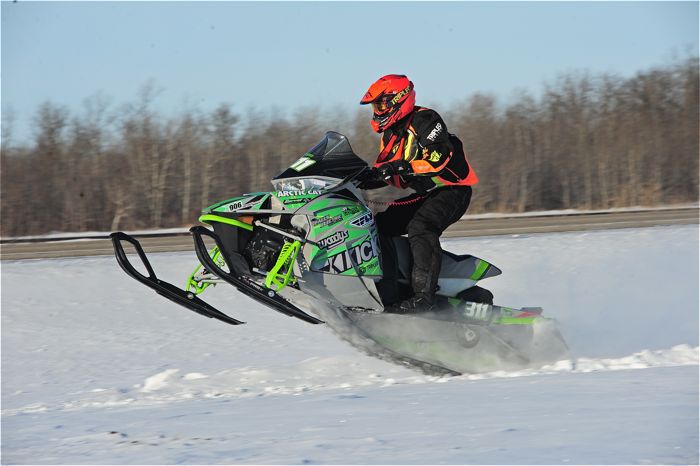 A winner of the 2007 USCC I-500, Ross Erdman knows and has what it takes to race fast and smart for three days. He did exactly that at this year’s event to claim a VERY impressive second place overall, holding off a gaggle of fast hombres including Polaris’ Aaron Christensen, who breathed down Erdman’s neck the third day. 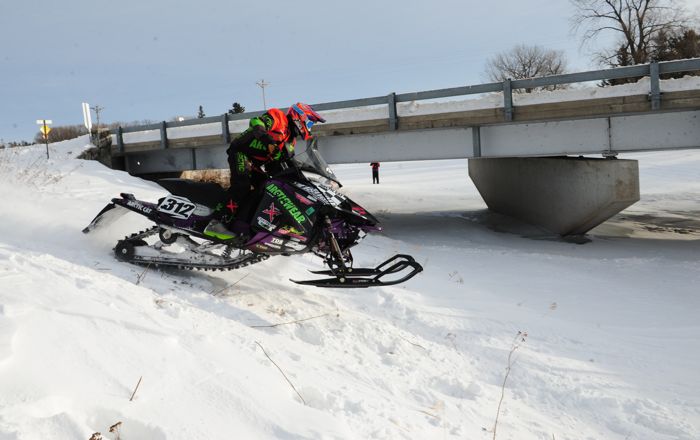 The Pro 600 class might have looked like it was open for anyone to win, especially after the first leg when Zach Herfindahl (above) finished fourth on the day, but such hopes and visions were quickly doused with a sobering dose of reality after the second leg, when Zach not only made up his 2-min. deficit on the lead but then added another 6 minutes of padding!

With that massive lead, Herfindahl and his Christian Brother Racing crew opted to utilize the one-hour maintenance session after the second day, which added 1-minute to his overall time. It was a sensible, conservative decision.

With his textbook blazing speed (while never crashing) Herfindahl kicked in the afterburners for the first half of the final leg, then cruised in for his first-ever I-500 win by more than five minutes.

There are no more superlatives to use when describing this guy. He’s a once-a-generation racer whose best may yet to come.

Above are a couple videos showing the remarkable speed at which Herfindahl attacks a cross-country course. This is why he’s the champ. 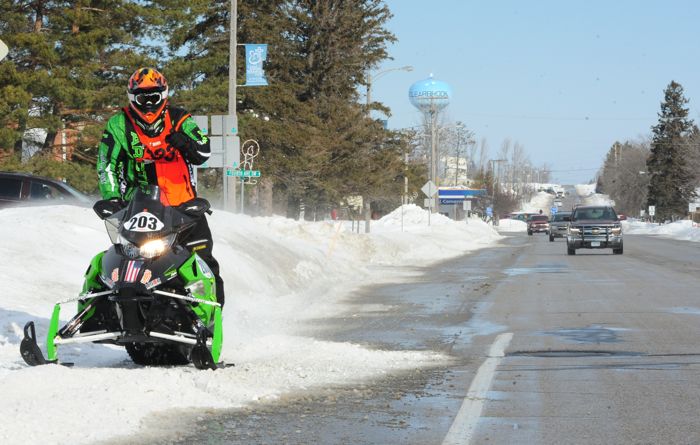 Only a few racers win a class at the I-500, but everyone who enters wins in the category of Life Experience.

Case in point: Eli Nelson (above), who began his competitive career last season in the Classic IFS category, then jumped into the Sport 85 class this season on a ZR 4000RR. Racing with the help of his dad, Eli was nothing but smiles throughout the 525 miles and three days.

When I talked with him at the finish line in Bemidji, he said it was one of the highlight experiences of his life. 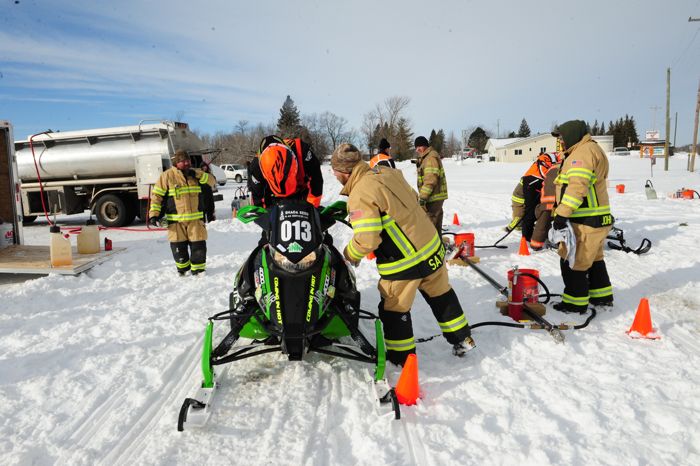 USXC brought back the manifold fueling system when it embarked upon resurrecting the I-500, which enable remote fueling that’s systematic for everyone. It worked flawlessly at the I-500, as seen here with Lucas Burnside. 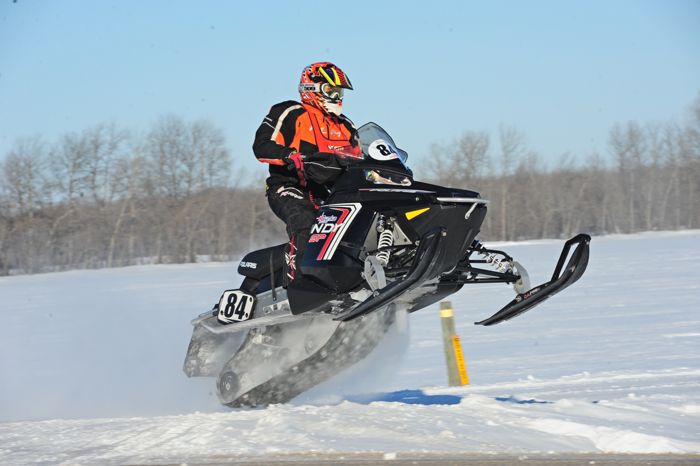 The I-500 brings, ahem, old racers out of the woodwork. One of them was 50-year-old Eric Christensen, who is one of the nicest guy’s you’ll meet and a veteran of this event going back to the 1988 Jeep 500. What I especially love about Eric’s brittle old bones is that they can still kick the fanny of racers half his age! Yes, he won the 50-plus class, but he also scored 10th overall in the Pro class! Take THAT all you young whippersnappers! 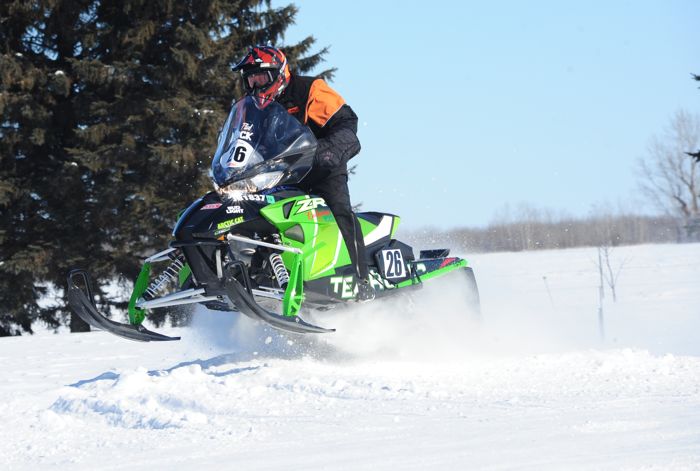 When it comes to bigtime, multi-day cross-country races, there is NOBODY who’s raced more than the venerable Paul Dick.

Paul has been racing the I-500 since the mid-1970s. Were in not for a questionable time penalty in 1979, he would have been the overall winner that year.

In addition to many, many finishes and class wins in the I-500, Paul has also competed in multiple Iron Dog and Cain’s Quest events.

I’m not kidding when I say that he’s raced more of the multi-day XC events than anyone in the world. But that’s maybe not even the best part of his 2017 I-500 experience… 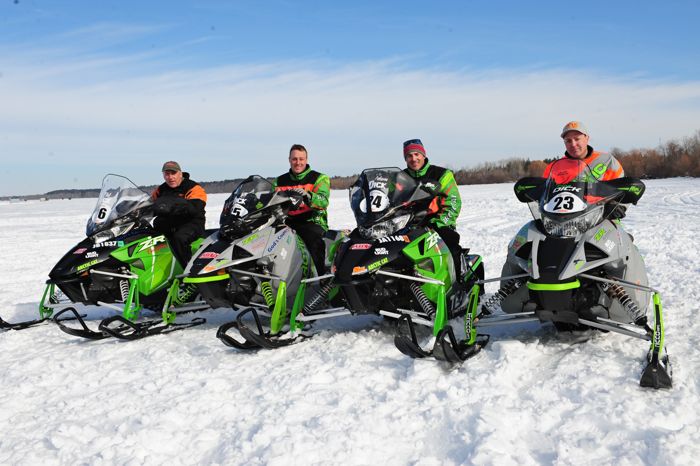 …since this is the first year that he raced with all three of his sons (each of whom finished!). From L-to-R: Paul, Jeff, Adam and Brian. The whole Dick family, including spouses and kids, were hooting and hollering throughout race week, and for good reason. 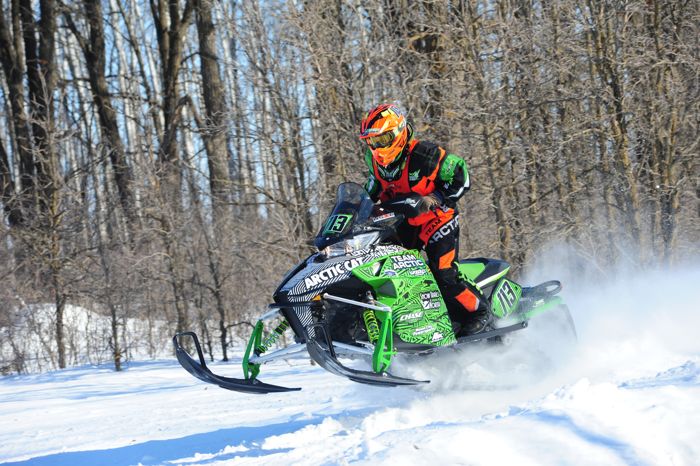 Racing (and finishing) the Winnipeg I-500 was a life goal for Ryan Weidemann. Like every racer who tackles the big one, Ryan had stories that covered the whole range of human emotion involving his family and friends as well as his actual time in the saddle. His dad was so ill during the race that he needed to be hospitalized. Together with friends and USXC personnel, the Weidemanns soldiered their way to the finish line in Bemidji to fulfill a dream. 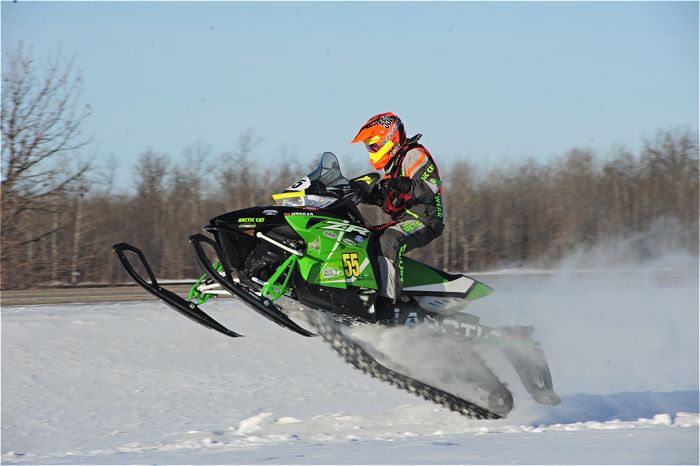 A couple days after the race I received an email from Mike Feil, father of Team Arctic’s Matt Feil (above) summarizing their family’s experience in the I-500. It’s as accurate a description as you’ll ever read about the magic of this event:

“What a wonderful week. Was very proud to be even a small part of it all. A million interesting things happened with just our extended group… highs, lows, sled issues the day before the race.

“Worked our asses off to get my backup/trail sled ready to be the “race” sled. Ryan Weidemann stopping at my brother’s to help for hours to get the backup ready.

“A super hardcore Polaris guy coming over to warn Matt in staging when it was -22 below that the ditches south of Winnipeg were brutally hard, and the drifts were off camber…GREAT advice! So important to keep the hand guards and windshield on!

“Just a great event that we will always remember: The hundreds of pick-up trucks on the ditch approaches watching, all the people in the little towns out to see the show, listening to race updated on the AM radio…lol. All the texts and calls from friends calling in to let me know where everyone was at.

“It took me back 40-plus years, to when I got to skip school and go with my Dad to follow this race. Brian Nelson and the USXC crew did a great job to pull off that race; the hundreds of volunteers were awesome!

“Did have some very bittersweet thoughts about [USCC president] Pat Mach. This race was his dream and he did lay the groundwork. Wish he could have seen it.

“Matt’s goal was a top-10 and he got pretty close…a bunch of his friends skipped school to come watch him come in. You can guess who was the first old guy to pat him on the back and tell him how proud he was of him at the finish…there will never be another Roger Skime!

“I will remember this week until they cart me off to assisted living. DAMN FUN!”

And THAT, my friends, is why the I-500 cross-country is so legendary. 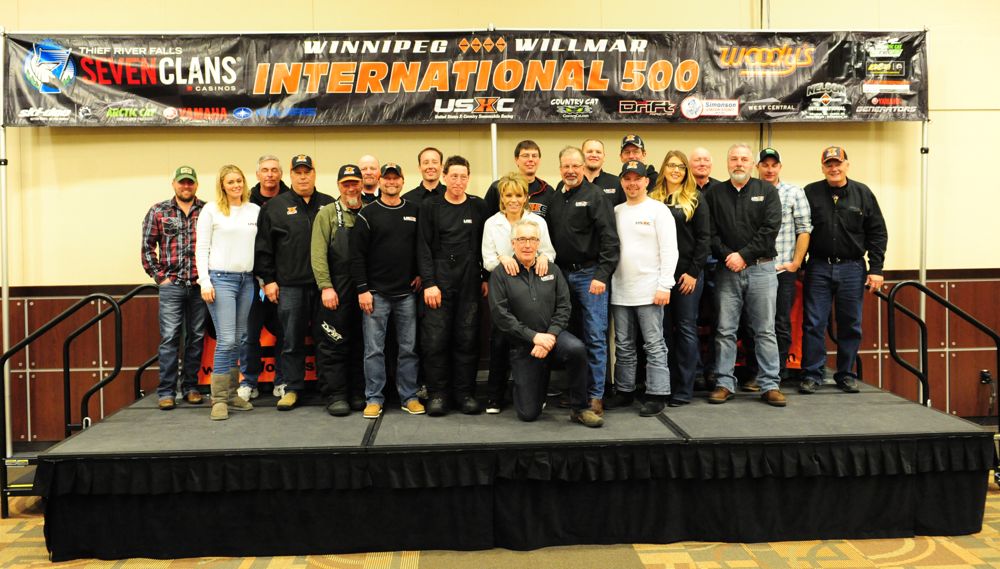 And a big thanks to the USXC crew for making this dream come true for everyone involved!