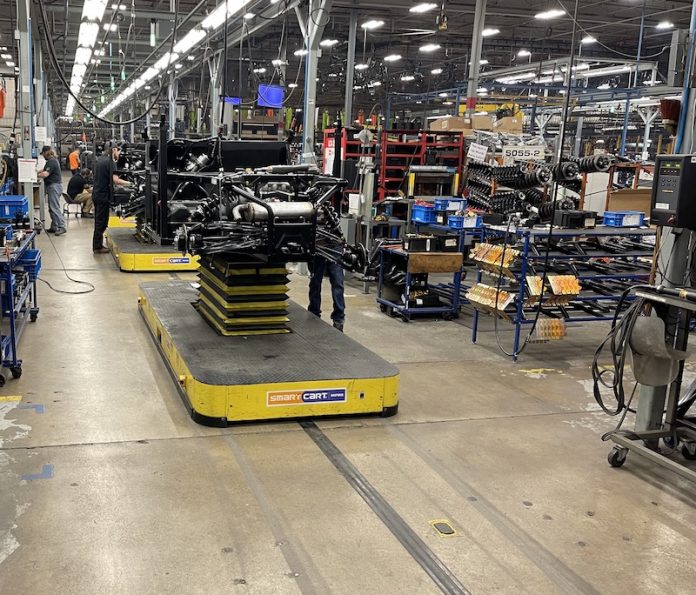 I shared a trip report at the end of October and focused on some of the employees on the snow side of the business. The faces on the dirt side of the business are equally important, and here’s a few paths I crossed during that trip shortly after taking a lap around the off-road production line.

I was excited to see the all-new Alterra 600 in production. This was my first time seeing the new 600 engine as a stand-alone piece in-person, and mated to its new drivetrain. The set-up is reminiscent of units like the Wildcat Trail/Sport 700 engine/drivetrain combos.

Because of availability, I haven’t been able to spend as much time as Id like on the Alterra 600 for longterm loaner rides, but I have spent some time riding one. My 40,000ft overview…Arctic Cat engineers did an incredible job with this unit. The chassis/steering is predictable, the new engine is an overachieving 600 with bigger-bore power, it has great throttle response, and the overall ride itself is more playful for recreation riding.(I myself enjoyed riding wheelies) If I have a disappointment, I wish our current supply chain situation wasn’t holding back production, and more of these new Alterras could get in the hands of dealers/consumers quicker, and on a more widespread basis. It’s one of Arctic Cat’s best ATVs to date.

Back in the Off-Road engineering development area, I had the pleasure of talking to two longterm Arctic Cat employees – Charlie Simensen and Chris Evans. I caught them in the midst of prepping a 2022 Prowler Pro XT for longterm engineering evaluation and they walked me through some of the unit’s features including the CVTech clutches and where the increased ground clearance came from. Both of these guys played instrumental roles in the development of units like the Wildcat X and XX, as well as Prowler Pro and the all-new Alterra 600.

Why the photo of a Kawasaki KX125? Most probably don’t know that Chris Evans was a Factory Kawasaki wrench for Bubba Stewart in his early motocross years. (Now you know)

While talking to Charlie and Chris, Brian Harris, Director of Engineering-Off-Road (photo above) stopped by. Brian showed me some of the future products they are working on, and this show/tell conversation left me with a permagrin.

I can’t share what those products are, but here’s the takeaway – Arctic Cat is in fact working on cool stuff! I wish I could share, but I don’t poo where I eat, so you’ll have to trust me. Do I wish they introduced these snow and dirt products yesterday? Of course I do, Im excited like all of you. Regardless, let’s start ending the talk about “Textron” doing nothing – The topic is nauseating, the company is moving forward and they are knowingly investing into new products for snow and dirt.

Seeing the above 2022 Wildcat XX waiting for shipping reminded me of Brian Harris’ development contribution to the unit much like Charlie and Chris. At the time, Brian was Project Manager for XX and saw it through from concept to launch.

On my way out of engineering, I stopped in the Styling Dept to visit Jordan Johnson and Nathan Blomker (Photo above). Jordan oversees the graphic designs on all Arctic Cat products and has done so solely for the past few years even though he’s worked in the department more than twice that duration. I was given a quick sneak peek at the 2023 line-up and some of you will be happy to hear, I didn’t see any “Gray”.

Next to Jordan, is Nathan Blomker. For you longtime ArcticInsider readers, Nathan has been featured several times here as the lead Industrial Designer behind a variety of Snow and Off-Road products. Between the two of these guys, I personally think they have some of the coolest jobs on the planet.

I enjoy what people surround themselves with in terms of inspiration/decoration by their desk. Nathan has a love for high performance sport motorcycles. I know he owns/owned several, if not all, featured on his wall above. As you can imagine, he’s also a very talented artist. My favorite Nathan originals happen to be the Ed Roth-inspired “Wild Cat” prints, which some of you may be lucky enough to own as a t-shirt.

I was standing next to these framed bluish photos and was giving them a once over as I enjoy seeing concept sketches. This particular one featured a Cougar and the year 1988 located by the artist signature. I didn’t pay attention to the signature, but Nathan pointed it out as Camilo Pardo – a name Ford GT fans will recognize, as Camilo was the designer behind the supercar. Nathan informed me Camilo was one of several commissioned to concept “the next Arctic Cat snowmobile” in 1988, and this was one sketch that has clung to the walls for many years, and Im glad it was preserved and survived this long.

Below is a video from Jay Leno’s garage featuring Camilo and the Ford GT. I hope you enjoy watching it as much as I did. (Id like to see a few updated Camilo sketches for concept snowmobiles now.)

This was a fun trip…one that left me with a smile on my face upon departure and I look forward to going back soon. -Kale