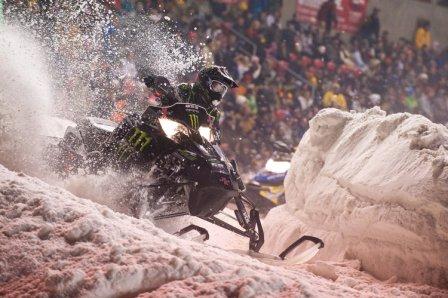 For the first time this season, the track was built with natural snow. Qualifying rounds acted as testing grounds for Hibbert and his crew to prepare his sled for the inconsistent track conditions.

In the 25-lap, 15-rider Pro Super Stock final Hibbert came out of the first corner clean and in sixth place. By lap five, he made his way into third and began a heated battle for the lead. The top three riders brought the crowd to its feet by entering corners three wide and aggressively swapping positions multiple times. On lap 14, Hibbert made a clean pass for the lead and pulled away for the win.

Later Saturday night, Hibbert had a fourth place start in the 15-rider Pro Open final. On lap 11 of the 25-lap main event, Hibbert took the lead and rode unchallenged for his sixth victory of the season. The event will be highlighted by a one-hour VERSUS broadcast Sunday, Jan. 23 at 3 p.m. EST.

Tucker Hibbert had this to say:

“It feels so good to walk away from Utah with both pro wins. I came into this race determined to win after losing the Open final here(Rio Tinto Stadium) last year. It’s a first class facility and once again, the entire state was so welcoming and supportive of the event.”

“Racing on natural snow was a challenge. It sounds weird to say that but the consistency of natural snow is a lot different than man made snow. It made the track unpredictable and kept me on my toes. The Monster Energy/Arctic Cat crew worked hard throughout qualifying to get my sled set up for the conditions.”

“After my trip to New York for Good Morning America, my focus is 100% on the five-peat at Winter X. I’ll spend the next few weeks testing and training at altitude. I really enjoy the whole testing process and am looking forward to it.”

Hibbert is now in New York City for his first in studio appearance on ABC’s Good Morning America. His interview is scheduled for Monday, Jan. 10 during the 8 o’clock hour. Later this week will set up camp in Colorado to test for ESPN Winter X Games 15 where he will be racing for his tenth overall and fifth-consecutive snocross gold medal. Watch the event live on EPSN Sunday, Jan. 30. 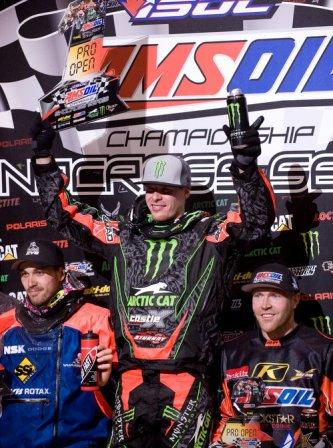