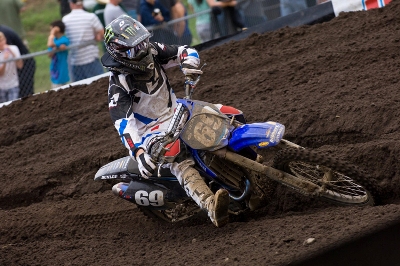 Five-time ESPN Winter X Games Snocross gold medalist, Tucker Hibbert, officially accepted an invitation to compete in the Super X (Supercross) event at Summer X Games 16. Hibbert was chosen as a first round pick by a selection committee and will be one of sixteen riders from around the world to compete at the historic LA Coliseum the end of July.  It will be his first appearance at the Summer X Games but he’s no stranger to racing motorcycles. He entered his first motorcycle race a year prior to his first snowmobile race and has been competing in both disciplines at a professional level since 2000.

At only 15, Hibbert was catapulted to instant fame by becoming the youngest gold medalist in Winter X Games history as the sole semi-pro in an all-pro Snocross field. He went on to win three national championships and two more X Games medals before walking away from the national Snocross scene in 2003 to shift his focus to racing motorcycles. From 2004-2006, he raced the AMA Supercross and Motocross series’ full-time but continued to race one snowmobile event yearly, the Winter X Games. November of 2006, he returned to the national Snocross circuit and has continued to split his time between both sports. He now holds nine Winter X Games Snocross medals, four national championships, 55 national victories and was recently crowned the 2010 FIM Snowcross World Champion in Sweden. His motorcycle honors include four top-ten AMA Supercross finishes along with one heat race win and eight AMA Motocross top-15 finishes.

The last time Hibbert raced a Supercross event was May 2007. He has continued to practice but has not had the opportunity to compete again until now. He is currently building a Supercross track at his home and is focused on lining up at the Summer X Games as a front-runner. He excels under pressure and hopes his eleven years of Winter X Games experience will play to his advantage.

Hibbert will join an elite club of crossover athletes who have competed at both Winter and Summer X Games.  Stay posted to www.tucker-hibbert.com and the Tucker Hibbert Official Facebook Page for a behind-the-scenes look into his preparations for Summer X along with his complete summer racing schedule.

Tucker Hibbert – “I’m honored to get an invitation to race at the Summer X Games. It’s an incredible opportunity to compete at both Summer and Winter X. Only a handful of athletes have been able to accomplish that feat. The Winter X Games is always a first class event so I can’t wait to be a part of Summer X for the first time.

I feel like I’m ready for the challenge of competing against the world’s best Supercross riders but am nervous at the same time. I have a solid amount of Supercross experience and have been racing motorcycles since I was a kid. I’m confident that I can put together a competitive program and am determined to prove to the world that I’m worthy of this invitation.”