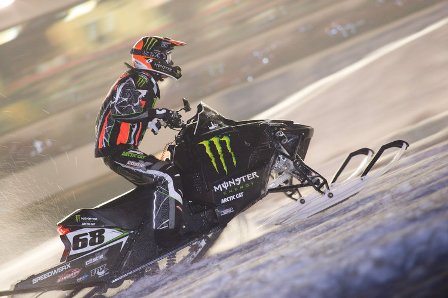 Goodridge, Minn. (Jan. 25, 2010) – Monster Energy/Arctic Cat’s Tucker Hibbert stood behind his word and delivered an unforgettable performance Saturday night at the AMSOIL Championship Snocross Series (ACSS) Air Force National in Shakopee, Minn. It was the biggest comeback in the 25-year-old Minnesota native’s career and has already been called one of the most exciting races in the history of the sport. Despite freezing rain, thousands of fans filled the stands at Canterbury Park both Friday and Saturday night to watch the world’s best snocross racers compete on the biggest track of the season thus far.

Known for his super smooth style, Hibbert rode on the edge and nearly crashed while fighting his way from ninth to first in the 15-rider, 20-lap Pro Open final. After spending half the race stuck mid-pack, Hibbert put on a charge that will not soon be forgotten. Polaris’ Ross Martin took the early lead and pulled away to what looked like an unstoppable run to the checkered flag. By riding different lines, Hibbert started turning lap times three seconds under Martin’s and quickly demolished his lead. With five laps to go, Hibbert made a clean pass on Martin and kept charging forward to eventually win by five seconds.

Hibbert put on another remarkable performance in Friday night’s Pro Super Stock final. He grabbed the holeshot and never backed down. By the end of the 15-rider, 20-lap final event, he had nearly lapped the entire field, crossing the finish line side-by-side with fifth place.

Next up for Hibbert is the biggest event of the season – ESPN Winter X Games 14 in Aspen, Colo. Jan. 27-31. Sunday afternoon, the eight-time medalist will be racing for a record breaking fourth-consecutive gold medal in the Snocross event. Sunday night, he will step away from the familiarity of racing to compete in the all-new Snowmobile Knock Out event. With his natural sled handling skills and top-notch sled set-up, he is a favorite for the new event. Winter X Games 14 will be live on ESPN and ESPN2. For a complete schedule, check out www.xgames.com.

Tucker Hibbert – #68 Monster Energy/Arctic Cat
“This was an awesome weekend. Because of the weather, the track changed so much from Friday to Saturday. I’m pumped I was able to win the [Pro Super] Stock final on a smooth, fast track and the [Pro] Open final on a rough, challenging track. This is exactly what I needed leading into the X Games. I can’t wait to get to Aspen.”