I was lucky to spend another couple September days in TRF recently.

The drive there was punctuated with a stop at the Arctic Cat Engine Facility in St. Cloud. This is where the company produces its H1 and H2 ATV and Prowler engines, and where future snowmobile engines will be assembled. 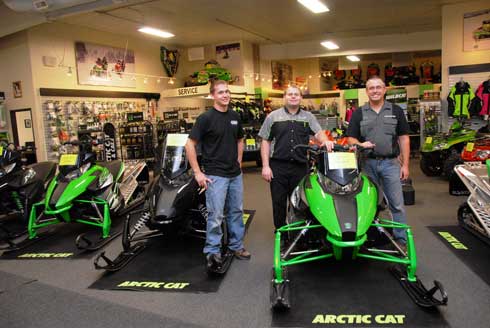 The Country Cat crew were busy preparing for their Open House the following day. Brothers (L-to-R) P.J., Mark and Dave Wanderscheid have built a phenomenal Arctic Cat dealership. Very professional, focused and dedicated. I’m going to do a full story on these guys in the near future.

One quick peak at the sled they hope will carry P.J. to a fifth Eagle River World’s Championship, inside their new race shop. Mark is the crew’s mastermind behind building the sleds, working closely with John Hooper. 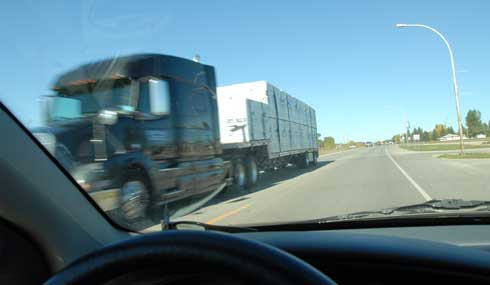 Back on the road, taking the scenic route north on Hwy 21/32, and passing this truck along the way as it hauls a load of Arctic Cat snowmobiles. 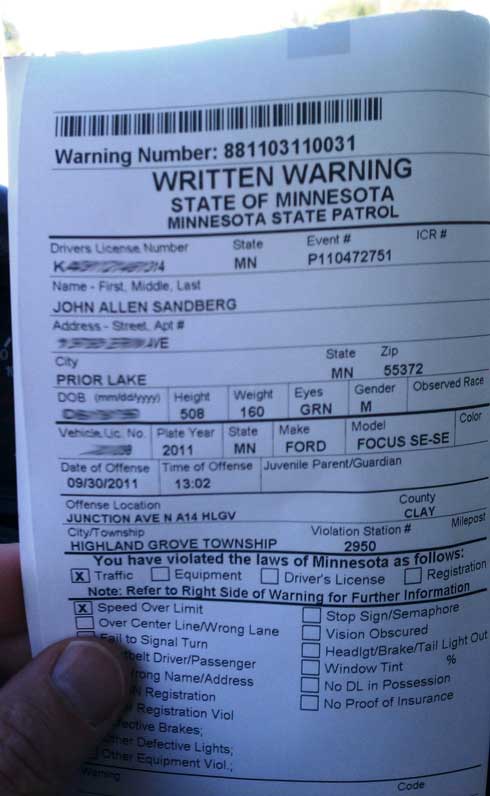 Whew! Thanks to the State Patrol officer for being kind to me. I had a momentary lapse of idiocy. 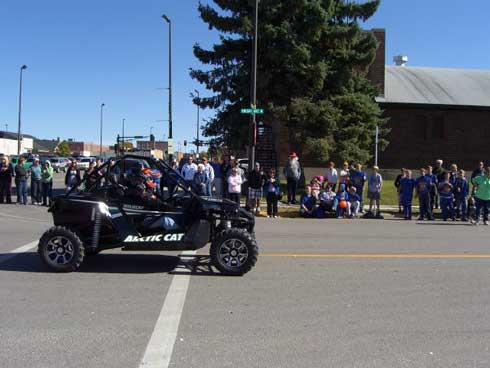 While I was learning my speeding lesson, much of TRF was on Main Street, enjoying a homecoming parade that included Arctic Cat snowmobiles and the new Wildcat. Special thanks to Mike Lane for hooking me up with this shot! 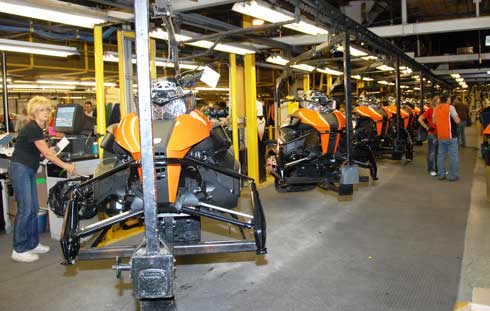 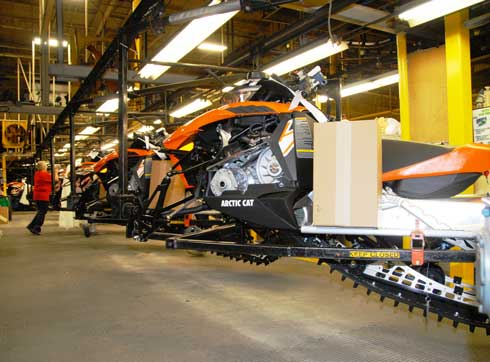 There’s both a hum of sound and a unique odor to the assembly area that words can’t describe, but that leaves me feeling like energy is being created here. I love it. 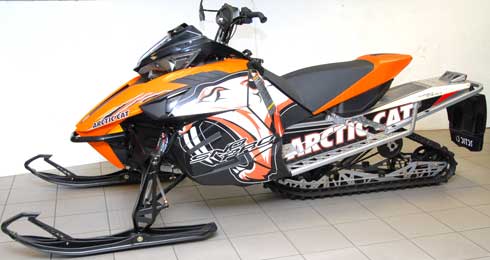 I shot some pix of the new graphics kits from Arctic Cat accessories. There are two hood kits: This Sabertooth Kit… 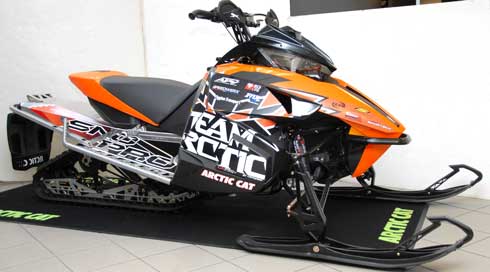 …and this Team Arctic Kit. There’s also Sno Pro and Arctic Cat tunnel graphics kits, shown on both images. More info on these kits in the coming days, here on your fifth favorite web site. 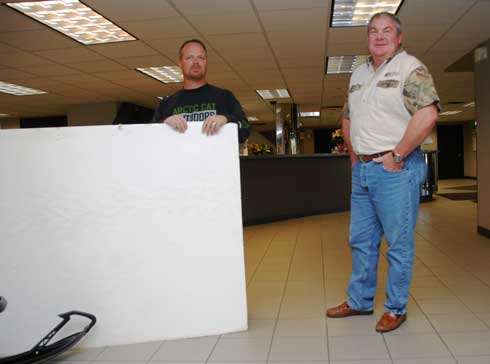 Helping me shoot the pix was Jeff Lane (l), while Rick Stokke acted as our Art Director. I’ve known both of these guys since the early 1990s, originally from racing. Good guys, even though they’re always making fun of me. 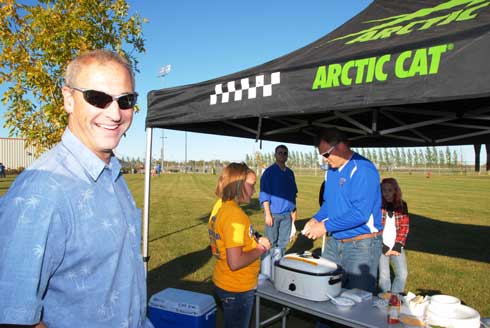 After working hours, I headed over to the football field to hang out at the TRF Prowlers Homecoming football tailgate party. Here’s Doug Wolter, Arctic Cat Director of Snowmobile Engineering, flashing a smile while Engineer Mike Tadych (blue, working on the slow-cooker) handles potato-heating duties. 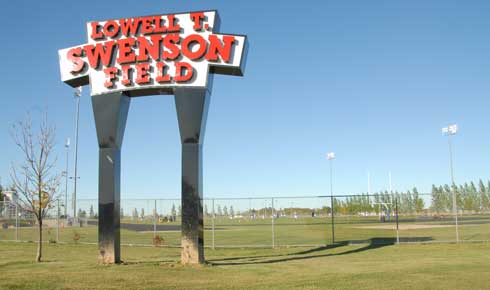 As Arctic Cat President in the late 1960s and 1970s, Lowell Swenson had a huge impact on the company. He also had a huge philanthropic impact on Thief River Falls. 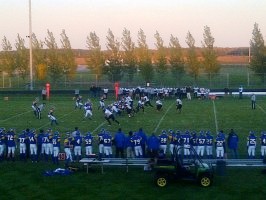 In case you were wondering, the TRF Prowlers won their homecoming game over the Park Rapids Panthers, 33-14. Click Here for a short recap. 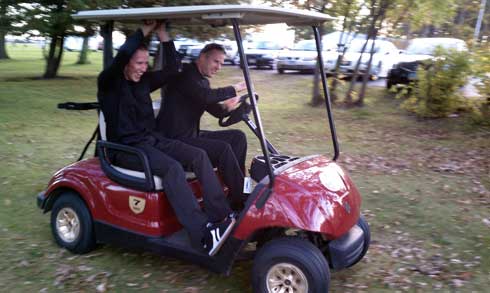 I was also in town for Ana Hibbert’s wedding. I promised Ana I wouldn’t show the goofball pix I took at the wedding, so instead I’ll show you this photo of her brother, Tucker, driving the golf cart while friend/Team Arctic snocrosser Wes Selby hangs on for dear life. 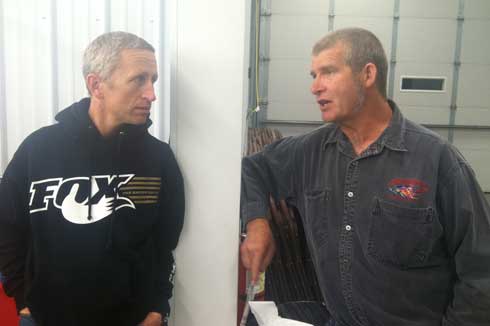 Father of the bride Kirk Hibbert (right) explains to me the joy a father feels when his youngest daughter ties the knot, as well as the intricacies of calibrating the Fox shocks on my Arctic Cat Sno Pro 500. 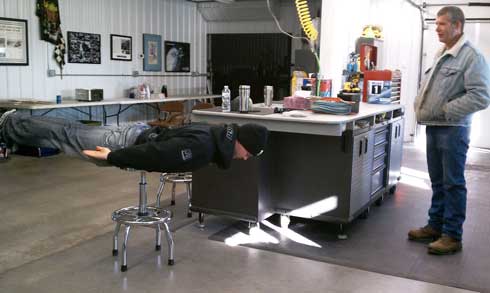 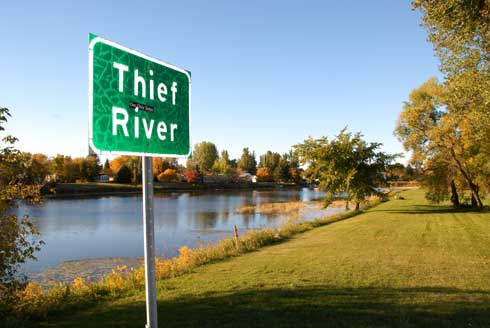 It was a beautiful week’s end in my favorite town, as well as a perfect beginning for Ana and Adam’s new life together.

In just a handful of months, I and many others will be racing down this very stretch of river in the USCC I-500. I wonder if I’ll recall this idyllic final day of September, when autumn was in full bloom and the world seemed perfect?