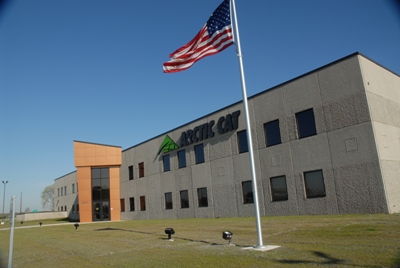 After several conversations with people from Arctic Cat, I’ve learned a few more details about the company’s plans regarding engines and their St. Cloud facility:

As for how the company can incorporate additional engine production without adding employees… the facility is currently operating at less-than-full capacity. The hope is that by the time Cat is ready to begin snowmobile engine manufacturing, that the plant will be at full capacity and they will need to hire more people.

In the meantime, there is a plan to enhance the engine design and development staff in Thief River Falls. It’s important to know that in the past, while Suzuki has designed and manufactured Arctic Cat’s engines, Cat engineers were integral to the design and calibration processes.

Regarding the availability of service parts: Beginning in 2014, when the transition away from Suzuki engines begins a new chapter in Arctic Cat history, there will be a minimum 5-7 year inventory of service parts. Depending upon parts demand, additional inventory will be added to extend beyond the 5-7 year period. This is no different than the parts availability timeframe the company has employed as standard operating procedure throughout its history.

As of now, there’s no specific information about what engines will be produced at St. Cloud. But the company is very aware of the more stringent 2012 EPA emission level requirements for snowmobiles, and is confident they’ll be compliant.

Obviously at this point Arctic Cat isn’t going to divulge any information about future engines. I believe the opportunity to supply its own engines for snowmobiles, or to source other suppliers, presents tremendous opportunities. And challenges.

If we look at the Company’s transition away from Suzuki engines for its ATVs as a crystal ball for what might happen with snowmobile engines, the future looks bright.

Perhaps it will include Kymco as it has with ATVs, perhaps not.

Arctic Cat used the Kawasaki v-twin in its ATVs for a short while. And obviously Cat had a history with Kawi in the early 1970s. So maybe that relationship will begin again?

Most important to me is Arctic Cat’s desire to control its own destiny by producing its own engines. I applaud this entrepreneurial spirit, and I look forward to the engines it will bring.