Vintage Road Trip Part One: Back to CPC

Recently I joined my friends Tom Rowland and Jim Dimmerman on a 2-day road trip to Wisconsin whose theme was “1982 prototype snowmobiles” from Arctic Cat and Scorpion.

It was a road trip of epic laughter and education.

We adopted an unusual (but effective) means of driving for this road trip. Tom (left) would sit in the driver’s seat and either talk on the phone, text, or talk to Jim and I.

Meanwhile, Jim (right) would steer the truck, while I captured the moments for posterity.

In hindsight, I’m not sure who was operating the gas/brake?

Like any entertaining road trip, this one came together hastily and with a complete lack of preparation. This fact emerged halfway into the drive from the Twin Cities to Janesville, Wis., when Dimmerman noticed a completely bald and ballooning tire on Rowland’s trailer.

We fixed it in record time and all was good vehicle-wise for the remainder of the trip.

We headed to Janesville to meet up with Jim Grafft, owner of Certified Parts Corporation, whom Rowland and I visited during another epic road trip a couple summer’s ago. That link and the associated stories within it are worth the read for anyone who missed it.

On this year’s CPC portion of the trip, the goal was to answer a few questions posed during that first visit with Grafft, as well as pick up a prototype Scorpion from Grafft’s collection.

No doubt, the prospect that the ’79 hood might have been the Eagle River World Championship hood added some intrigue and anticipation for the three of us.

Having Dimmerman himself along would go a looooong way towards finding an answer.

So we met Jim Grafft (right) at one of his storage buildings and, as was the case a couple years ago, he was gracious and generous with his time. All the more remarkable was the fact that the town had suffered severe weather earlier in the morning, knocking out power to most homes and businesses. Grafft certainly had more important matters to attend to, but he helped us with our mission nonetheless.

So we took the hoods out into the sun for inspection.

Besides the specific pin striping, the defining characteristic of the 1979 Factory Team Sno Pro hoods was the metal flake within the gel coat.

When Kenny Halvorson built the original hoods, he used a very light dose of metal flake. So light, in fact, that it’s barely noticeable.

Since there were only two drivers who had ’79 Sno Pros, there are VERY FEW true ’79 hoods in existence.

And sure enough, Dimmerman concluded that this was indeed a factory ’79 hood (as well as true factory ’78 and ’81 hoods). But were these hoods actually raced?

Pretty dang cool seeing Dimmerman comb over a hood that might have been his own back in 1978!

As it turns out, Dimmerman believes that these three hoods never saw a lap around a track. The clues were lack of scuffmarks underneath the hoods, where they would have mated with the bellypan, as well as any compromises to the gel coat.

Based on what Dimmerman remembers from his time at Cat, and on what Grafft remembers when he got these hoods in 1981, it’s most likely that they were used for promotional photography.

I snapped this photo of Dimmerman and Grafft with the hoods, and then it was time to do some more digging.

Back into storage it goes, although Grafft has plans to put all three hoods on display somewhere in the future.

With the power back on, we could do a little more looking inside the storage building. 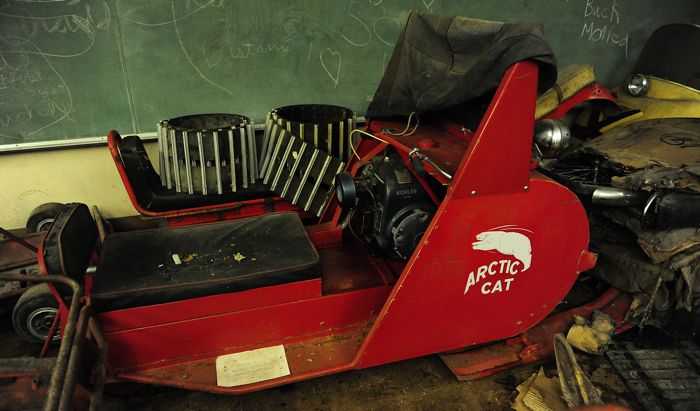 No, none of these machines are for sale (yes, we asked). Grafft isn’t exactly sure of their future, but he’s leaning towards having a few restored.

Having looked through the sleds for a while, it was time to grab the prototype 1982 Scorpion that was part of the day’s mission.

Tom Rowland offered to take the sled home to Thomas Sno Sports, his Arctic Cat dealership in Ogilvie, Minn., where he would clean and restore (as in original preservation) so that it could be displayed at the Snowmobile Hall of Fame and other possible locations.

The model was to called “Sierra.”

It featured a 440 fan-cooled engine and a parts spec that suggested it was the equivalent of an Arctic Cat Panther.

It also appeared to have outboard-mounted shocks for the spec, although the suspension in this unit was a traditional sliderail with inboard shocks.

After we loaded the Sierra into the trailer, we brought out this prototype sled and tried to get Dimmerman to drive it, but he wasn’t having ANYTHING to do with that suggestion.

Before leaving this storage building we shot pix of another hood from Grafft’s collection: a prototype 1982 Scorpion Sidewinder hood.

The graphics were clearly cut/mask style, as if they were still trying to decide the final style and/or placement, prior to Arctic Enterprises (and Scorpion’s) bankruptcy in 1981.

With our goals complete at this storage facility, we had one more stop to make with Grafft…

…at the Hoffco/Comet clutch facility that they own in nearby Edgerton, Wis.

Grafft purchase the Comet business in 2009 and, now run by his son Jay (left) has built it back into a solid company, with all manufacturing occurring in a massive 200,000-sq.-ft. building.

They’re manufacturing Dusters, 102-C, 108 and all kinds of other clutches, as well as replacement pieces for these and other Comet-sourced machines.

For snowmobilers who want a nicely-priced, quality clutch for their older machines, the Comet brand is alive and well as a great option.

It was great to visit this storied brand’s new digs, to see that good ol’ domestic manufacturing still exists, and to spend several hours with the Grafft family.

Yet it was also time to head north, to Wausau, Wis., for the next three stops of this road trip.

On the way to Wausau, Dimmerman stopped to see an old friend. They hadn’t talked much in the past few years, so it was good for them to catch-up with each other.

With that detour out of the way, it was time to meet up with a guy who was selling a 1982 prototype Arctic Cat Panther.

Yep, “1982” and “prototype” were definitely a theme of this trip. And this machine was one that Rowland was considering adding to his awesome collection of ’82 prototype Arctic Cats.

Actually, this is a machine that Rowland had purchased and owned once prior, but a long, convoluted and bizarre story ended that brief affair.

This time around, Rowland was looking to give it a permanent home. So the three of us listened to all the salient features described to us by the seller.

And while Rowland distracted the seller, Dimmerman dove in for a closer inspection. Or something like that…

This ’82 proto Panther had a liquid-cooled engine (a 440 bottom end with a 500 top end). The seller had purchased it many years ago from Gordon Rhode (remember the name, he’ll feature prominently in part’s two and three of this series), but was no longer interested in owning it.

Rowland was satisfied with the machine and, after we gave the seller a serious 1-2-3 working over, a price was agreed upon and the transfer made!

And for the first time all day, I actually did some work by moving it to the trailer.

Having been on the road since 4am; driven somewhere around 400 miles (with Dimmerman doing the steering from the passenger side of the cab); smelled the funk of old sleds in storage; walked a couple miles in the Comet building; raced to Wausau; and loaded two sleds into a trailer, our day was only partially complete.

Maybe the best part of the whole trip was just 20 minutes away, at the shop of Arctic Cat collector Randy Springer!

Which will be part two of this road trip story, coming soon.