2016 USXC Warroad: It Was the Best of Times for Team Arctic

Warroad is a small town on the southern edge of big Lake of the Woods in far northern Minnesota. It’s so close to Canada that I’ve gotten charged international rates from my mobile service provider for calls made from the Seven Clans Casino that’s planted squarely on Minnesota soil.

While the rest of the state was experiencing snow-melting temps on the last full weekend of February, Warroad was basking in 6 inches of fresh snow atop plenty of snowpack, which made for an righteous cross-country race.

Normally the last race of the season in USXC, Warroad was instead the penultimate race in this year’s schedule, with a final lake event next weekend in Naytahwaush, Minn.

While there was certainly some drama about who would win the first USXC race this season on Pine Lake, especially in the Pro classes, it’s been business-as-usual ever since, with either Team Arctic’s Wes Selby or Zach Herfindahl claiming pretty much every Pro final since the opener.

That said, anytime you have a race, you have a prescription for drama. At Warroad, the drama was rough ditches; plenty of crashes and mangled sleds; and excellent battles in several classes.

Emerging from this scene were 16 racers who combined to win 18 of 21 classes on the weekend. Yes, 18 of 21 finals went to Arctic Cat racers, as did 43 of 63 podium positions. 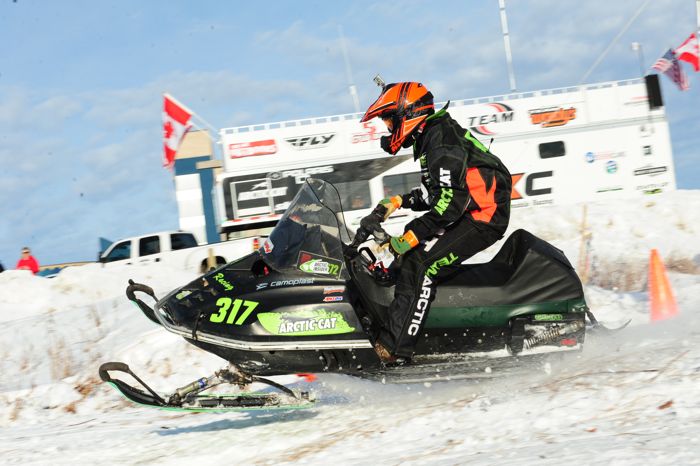 After garnering procurred upwards 139 1979 Arctic Cat Cross-Country El Tigre models over the past handful of years, the Team Mattison shows up at only the events where they will pound these machines into submission. Hence their attendance at Warroad, where Michael Mattison only made it one of two laps on his Tiger due to a ski and spindle getting torn off halfway through the first lap. That’s the bad news. The good news is, he was the only entry in Vintage, so he took the win and sprayed copious amounts of champagne from atop the podium. 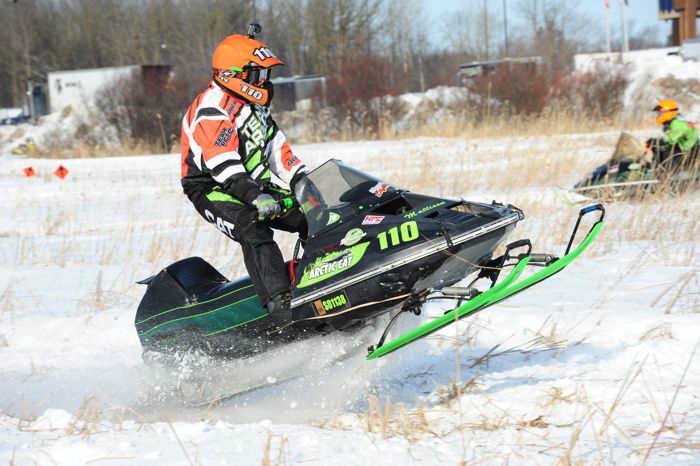 Michael’s brothers Alan and Gerry were left to do battle in the Vintage 50 Plus class, where Gerry (above) tried really, really hard to tame the wild beast that is his sled. He eventually corralled the thing, banged it through some ditches and delivered another first place trophy to the team’s shop. 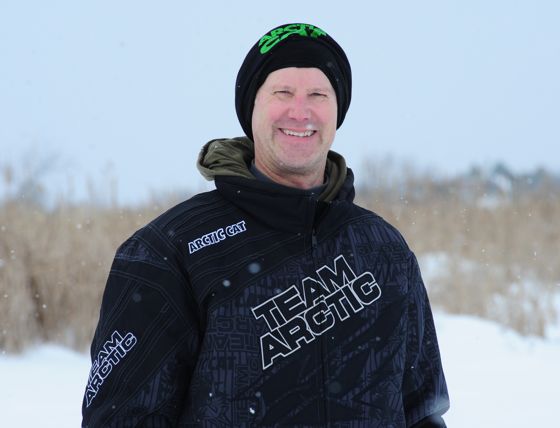 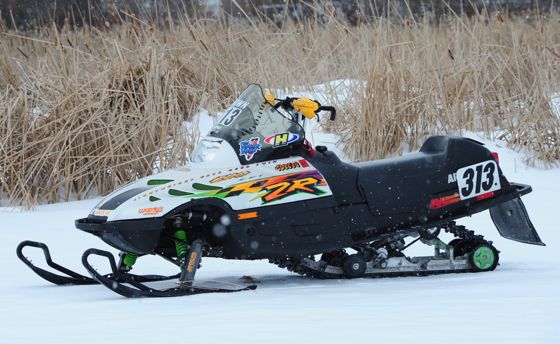 Brian Brown was so dang fast on his sweet 1998 ZR 600 that I couldn’t capture a picture of him winning the Classic IFS 50 Plus class, so instead I’m running a photo of the sled and his smiling face. 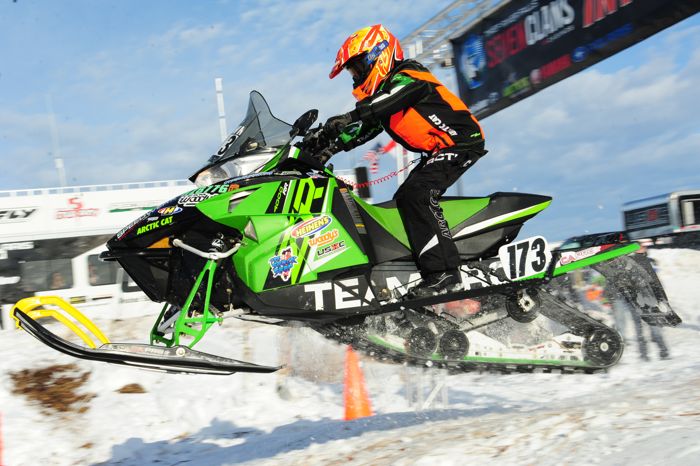 Brian’s son Paul also claimed a win, taking the Junior Boys 10-13 class (which has been a common occurance for most of the season). 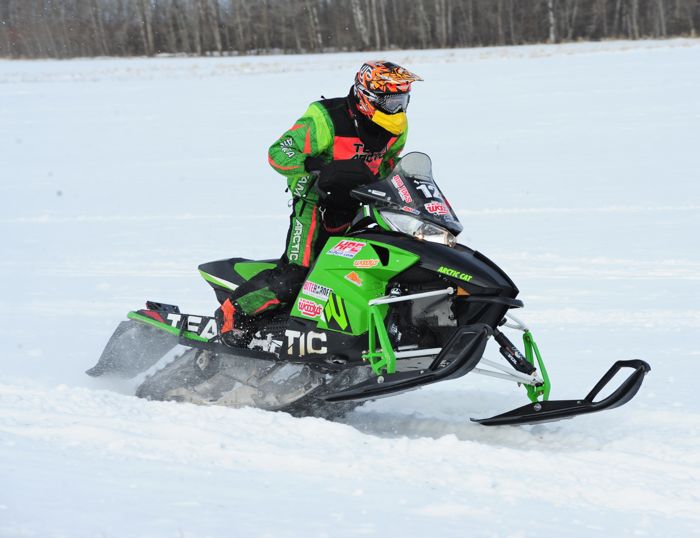 Garet Grzadzielewski and Thomas Junglen had a great battle going in the Junior 14-17 Boys class both days at Warroad, with double-G taking the win. 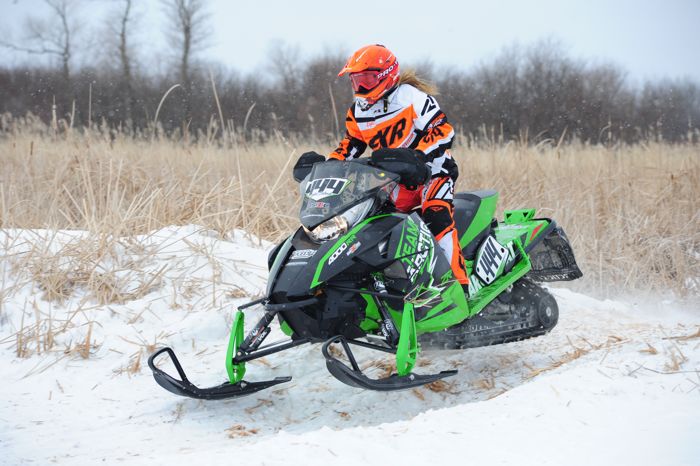 If you’re going to win the Junior 14-17 Girls class, you gotta beat this speedster, Lydia Sobek, who has done nothing but win all season long, including here at Warroad. 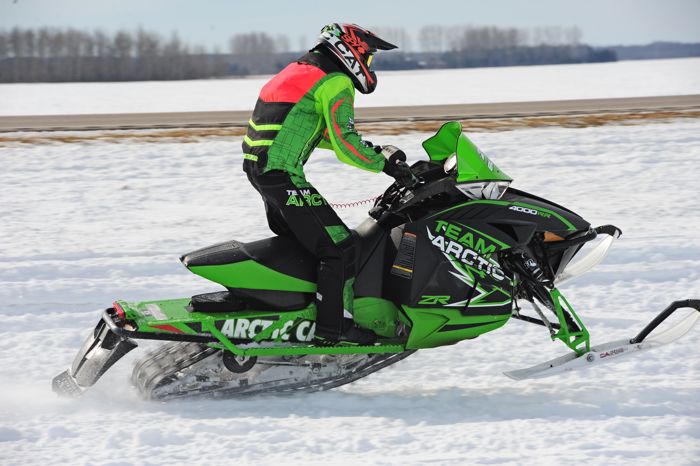 David Brown and Jordan Bute had one heckuva battle going in the Sport 85 class both days at Warroad. Bute (above) took the win this time, but Brown kept him honest. 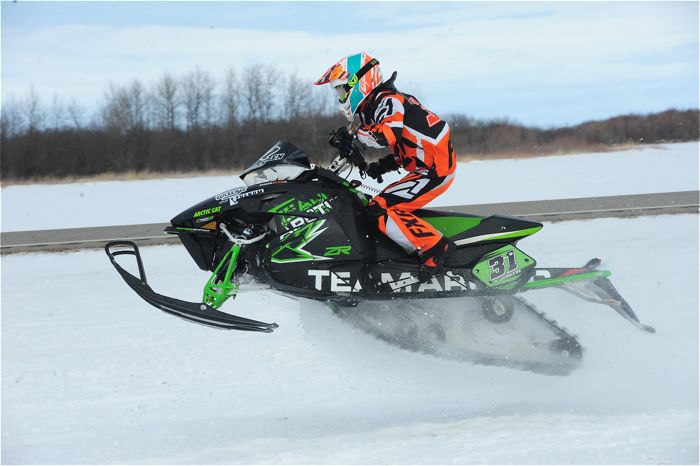 You can tell that Andy Junglen likes launching ditch approaches; because every time I shot a pic of him this weekend he was hanging it out. The effort proved fast, with Junglen taking the win in Sport Open. 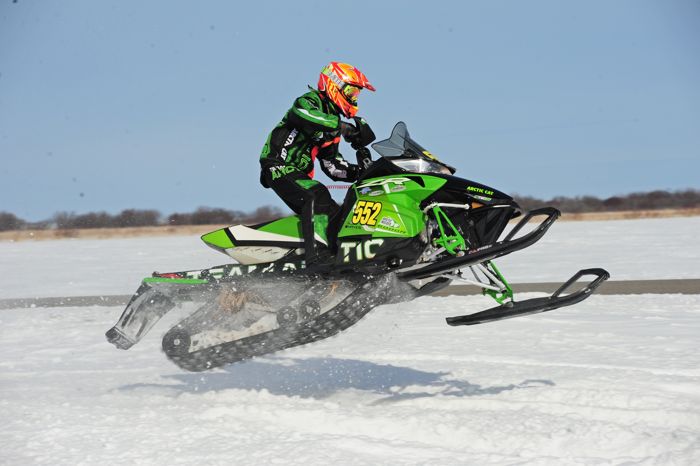 It’s been a very good race season for Matt Feil who, after a hiccup at the first race this season, has gone on a tear in the Sport classes. At Warroad he took the win again in Sport 600 and a second in Open.

Not to be outdone by his brother, Thomas Junglen also put the family name on the top step of the podium by taking the win in Trail. 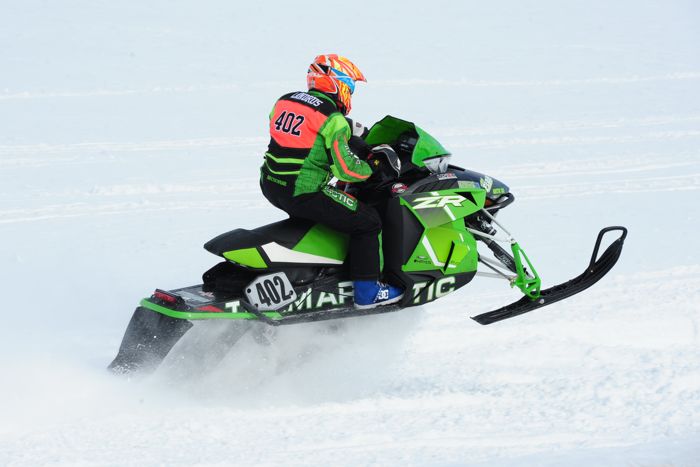 Savannah Landrus has had a breakthrough season in the Pro Women class, taking her second win of the season at Warroad. 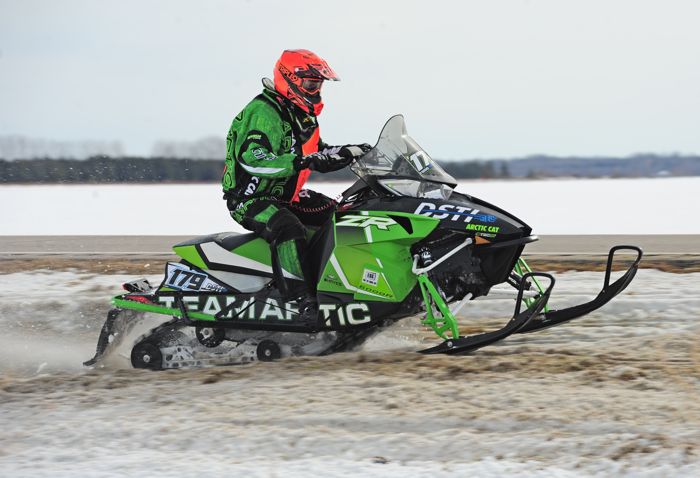 He isn’t quite having the same winning season that he enjoyed last year, but Todd Frishmon is still notching top finishes, including a solid win in Masters 40 at Warroad. 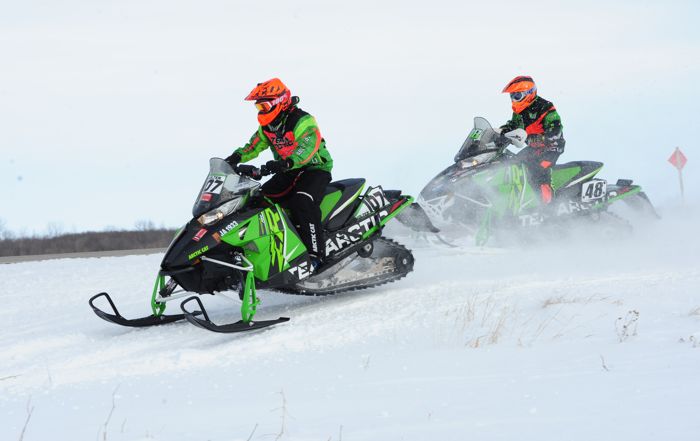 All season long, the Expert 85 classes have been a three-way battle between Ean Voight (right), Brandon Wolter (left) and Hunter Houle (not pictured). These three have raced close enough that you could have thrown a blanket over them during most of the weekend. Voight emerged the winner in Expert 85 Improved while Wolter claimed the Stock class. 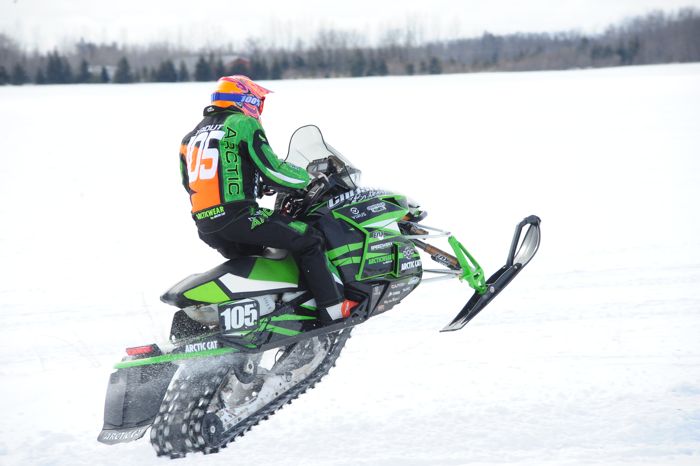 All season long, Ryan Trout has been knocking at the door of his first Semi Pro 600 win. He’s notched five wins in the Improved class (including one at Warroad), but he hadn’t yet climbed the top step in the Stock class. That changed after a fast, gutsy performance at Warroad where he battle hard with Taylor Bunke. Trout took the win and, as icing on the cake, also finished third in the Pro 600 class. That’s a very impressive weekend of racing for Trout, and he should be dang proud. 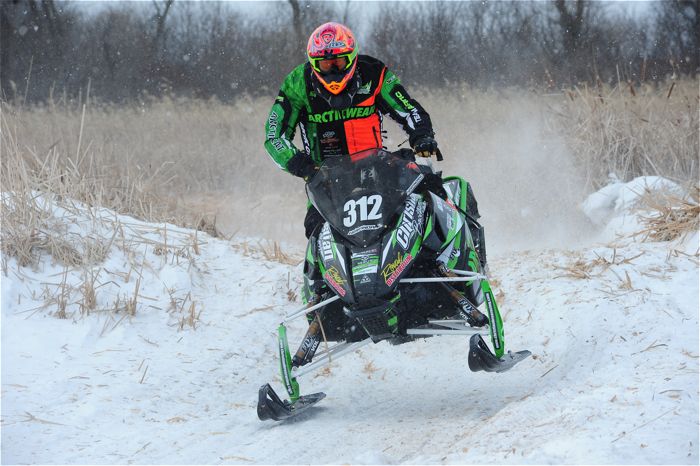 At the last USXC ditch race this season in Thief River Falls, Zach Herfindahl (above) and Wes Selby delivered an epic duel that saw Herfindahl prevail by just seconds over Selby. Going into Warroad, each racer had scored two wins in both Stock and Open classes, and each held the points lead in one class.

Alas, the drama that might have been in the Pro classes at Warroad took a tumble when Selby did just that on the first lap of the first race of the weekend. He sustained a concussion and wasn’t able to race the rest of the weekend. 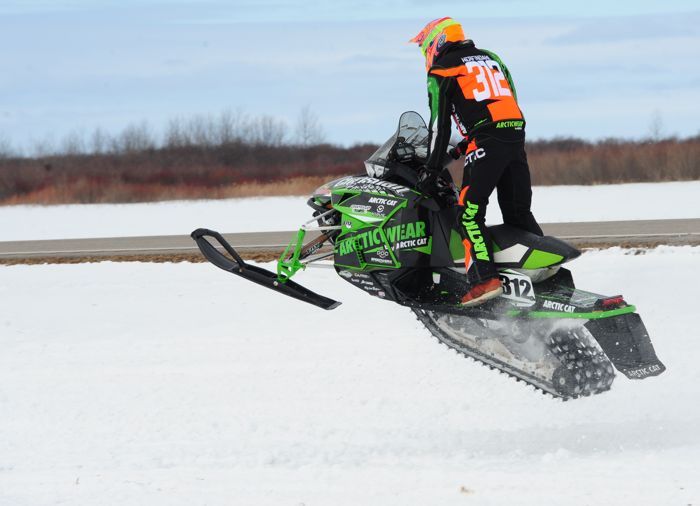 Thus, Herfindahl was on his usual “other planet” all by himself. His remarkable speed and control while launching approaches and railing a rhythm through the holes is truly a sight to behold. Nobody else was even close at Warroad, so Herf claimed both Stock and Open classes while never looking back.

And just like that, Team Arctic claimed 18 wins on the weekend.

Congrats to these guys and gals, as well to all the racers who dared themselves to chase the checkered flag at Warroad.