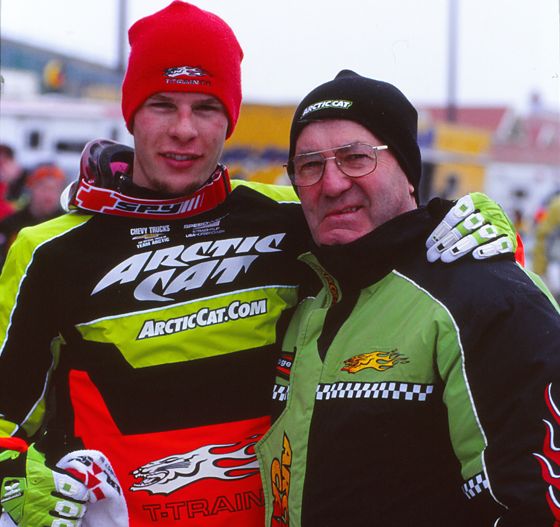 In May, Team Arctic’s Tucker Hibbert announced his retirement as a professional snocross racer. The decision came after another remarkable race season during which he won his 11th Pro Championship title and 11 of his 138 career victories in the premier class. Tucker retired while still firmly on top of the sport, as the greatest snowmobile racer of a generation and the all-time winningest snocross racer.

Beginning with his first race in 1995 until his last race in March, Tucker Hibbert has raced on only one brand of snowmobile: Arctic Cat.

From the first-generation ZRs to Firecats, from Sno Pros to the current ZR, Hibbert raced the legendary machines that his father Kirk helped engineer. As Tucker progressed and achieved greater levels of success, so too did the innovative Arctic Cat snowmobiles that he piloted to victory. It has been a partnership like no other and a relationship that everyone at Arctic Cat is proud of and thankful for.

Here are some reflections about Tucker and the Hibbert family from some of the people at Arctic Cat who have worked closely with him over the years.

“I’ve had the privilege to work alongside both Tucker and Kirk since 2007 when I took on the responsibility of developing our race sleds. Tucker’s passion and drive to win every time he’s on the track has been a huge influence in Arctic Cat’s success. The combination of his skill on the track, his ability to communicate how a snowmobile performs, plus having Kirk help guide our vision to improve the performance, has been a winning combination. That passion to be number 1 inspires me as a racer and an engineer, to always innovate and improve our machines. This is the culture that I saw when I came to Arctic Cat and it’s the culture we’ll keep building on. Thanks Tucker and Kirk, for all you’ve done and the passion you’ve shared!”

“I’ve been fortunate to be part of Team Arctic Racing since 1994, and I have been close to the Hibbert family the entire time. From my seat today as the Snow Racing Manager, I can tell you that Tucker and his entire team always strived to be the best they could be. Their unrelenting drive made it easy for people here [at Arctic Cat] to get involved and make better snowmobiles.

“The Pro final is always the last race of the day and there isn’t another racer that I would rather put on the starting line for our team than #68. As one of his biggest fans, I knew he would always give everything he had to win. He did it every single time he hit the track. That desire and drive are what separates the good from the best. And once Tucker became the best, he could have taken things for granted and been satisfied. But he did just the opposite. The more successful he became, the harder he worked.”

“It’s natural to reflect on Tucker’s unmatched success on the racetrack. But we shouldn’t overlook the huge efforts he and his team have made off the track. He’s made himself so accessible, from sharing himself on social media to his signature line of Arcticwear clothing and two signature snowmobiles. When he finished a race he went straight to his merchandise booth to sign autographs for all his fans. He attended events like Hay Days and the Snowmobile Hall of Fame. And he’s used his fame to help others, like partnering with the Make-A-Wish Foundation. He applied as much work and dedication to those projects as he did his racing, and it’s why he’s one of the most recognizable and popular snowmobile racers of all-time.”

“Tucker’s attention to detail and his ability to develop products is second to none. One great example is a race glove we developed together. We started with his very detailed list of features that the glove needed. Our glove supplier – which is one of the best in the world and works with many of the premier clothing brands – built the first prototype, which we sent to Tucker. He evaluated it and sent the glove back with key feedback for improving it. After the seventh revision, the supplier congratulated us for having broken the record for most revisions. There were nine revisions before Tucker gave it the green light. Was it a great product? Yes. Was it perfect? No, because with Tucker there is always room to improve every aspect of his program.

“The impact Tucker, his family and team have made on Arctic Cat is immeasurable. Their creativity has shaped and improved our snowmobiles and clothing. They’ve inspired us and made us proud. And of course they’ve given us so much to cheer for. We’re all a bit sad that Tucker has retired. But we’re also happy for him and his family. And we’re so thankful for all they’ve done for the Arctic Cat family of employees and fans.”

“When an Arctic Cat racer wins the top spot, it makes me smile. And I’ve been fortunate to smile for many decades, with so many racers, each of who has been very important to me and to Arctic Cat.

“To have gotten hundreds of smiles from Tucker is something extra special. He has made me smile so many times and brought so much joy, often in such inspiring ways! He is the Arctic Cat icon for snowmobile racing.

“Why was Tucker so special? Because he lived it. He was tenacious. He prepared and competed with total conviction. He believed in his team and himself. He competed to win, and he went into each race knowing he’d win. And when he won, he always expressed gratitude for the talent he was blessed with and the help that others gave him. That is why Tucker Hibbert was such a great champion.”