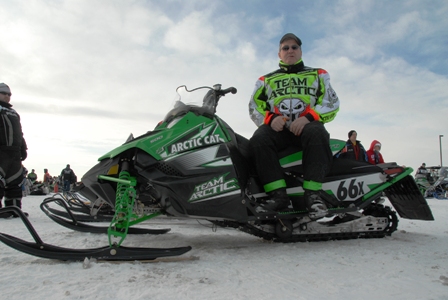 Let’s start with what was the emotional epicenter of most Arctic Cat fans for the weekend, Roger Skime (VP of Engineering) entering the I-500 at the ripe young age of 66. Here’s Roger prior to the start of Day 2. 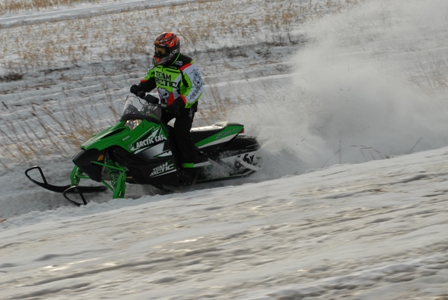 Roger rode smart, fast and in control for three solid days, pounding the ditches when he he had good visibility. No crashes for this racer. 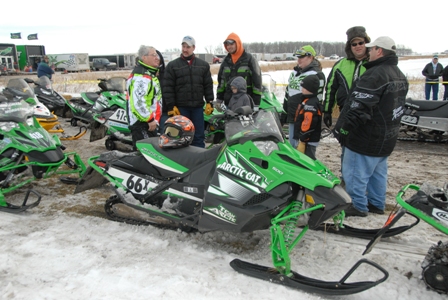 Without question, Roger was the guy with the most fans throughout the weekend, as friends, family and people inspired by his story came to pat him on the back. And no lie…every time Roger got off his sled at the finish line, it was all smiles and joking around.

Roger finished fourth in the Legends 50-plus class with a time of 10:56:43. Thanks for being you, Roger! It was an honor to chase you all weekend. 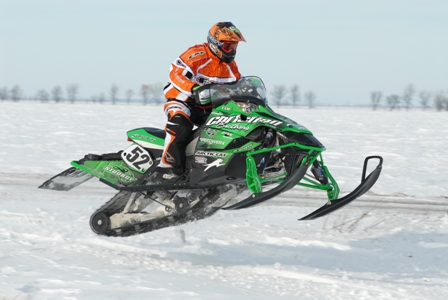 After finishing second last year, expectations were high for D.J. Ekre of the Christian Bros. Racing team. Setting the fast time on Day one confirmed he was the man to beat… 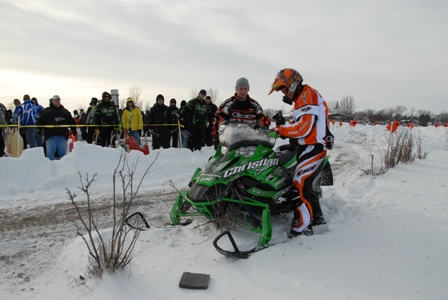 …But if this year’s I-500 proved one thing, it’s that ANYTHING can happen in cross-country. On Day Two, Ekre came into the first fuel stop with a broken brake lever — the result of some no-holds-barred battling with his own teammate, Ryan Simons.

After getting fuel, Ekre pulled out of the fuel area to perform a quick repair (he lost a brake lever a couple years ago in this race, and now carries a spare). Meanwhile, his other CBR teammate, Cory Davis, was flying along at a pace that would give him the fast time of the day and put him within seconds of first. 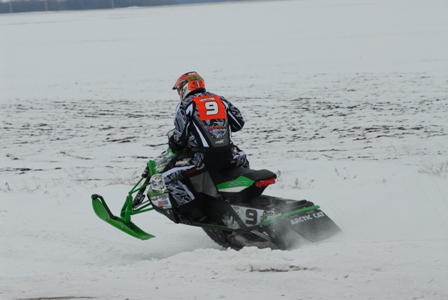 Ryan Huston also delivered a scorching run on Day Two to move from sixth to second, just six seconds shy of Ekre. The drama was building. 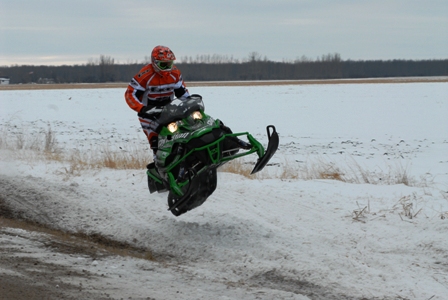 Cory Davis moved into third, 23 seconds of Ekre, by airing the same race-winning pace that brought him a win at the USCC opener two weeks prior to the I-500. But as Davis would learn the next day, cross-country racing can be cruel, even to those who seem destined to win. Yet with Team Arctic racers occupying the top-4 positions, it seemed as if a return to victory was a solid bet. 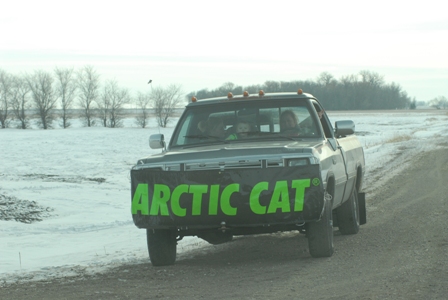 When there’s a cross-country race in NW Minnesota, the majority of race fans wear either Arctic Cat or Polaris colors. The rivalry between these two brands is most fiercely fought in cross-country, and especially at the I-500. 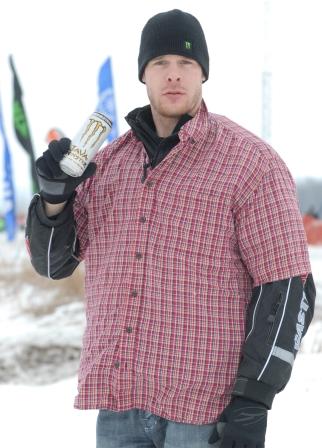 There were some familiar faces in attendance at this year’s I-500, including this Monster-drinking dude with the sweet shirt. 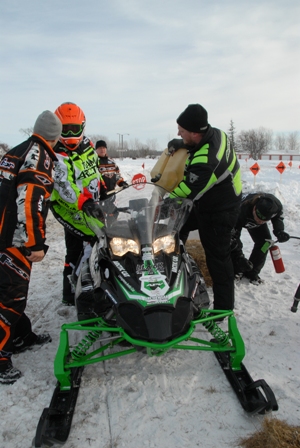 Joining Roger Skime in this year’s race was Arctic Cat Product Manager, Joey Hallstrom, whose love of cross-country racing spans decades. Here’s Hallstrom during the second fuel stop on Day two. Like Skime, Hallstrom would finish the race without incident, and will undoubtedly use his experience to help improve future Arctic Cat snowmobiles. 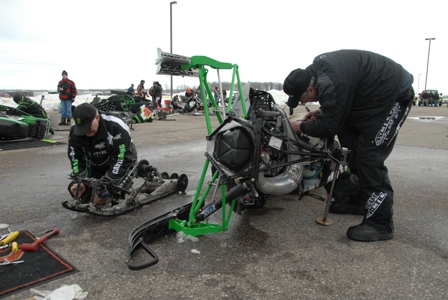 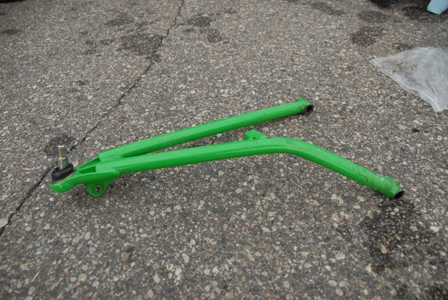 But even the Ebert crew had reason to worry, as replacing a bent lower A-arm clearly illustrated how temporary any high finish might be.

Day Two had proven to be one of the most brutal legs in the past decade, with seasoned racers proclaiming it the toughest day of running they’d ever experienced. 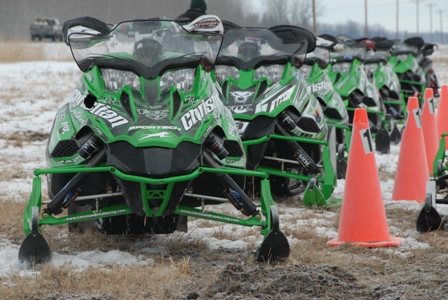 The starting grid for the final day looked good for Team Arctic. 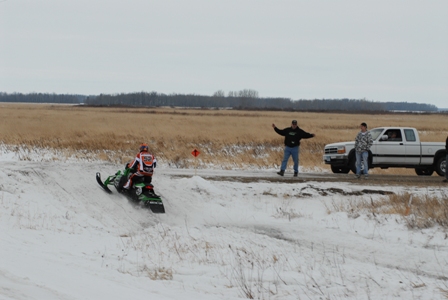 A few miles before the first fuel stop Ekre had built up a huge lead over second place, and the crowd who were listening to race-radio gave him the universal sign for “You’re killing it, so race smart.” Ekre got the message and was racing like a man ready to assume the mantle of I-500 champion. 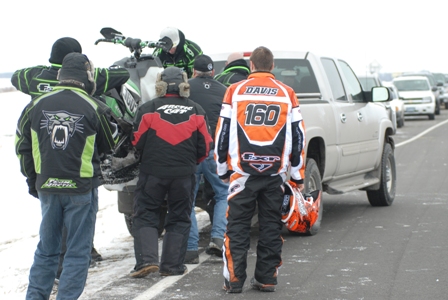 While Ekre was blazing out front, Cory Davis came into the first fuel stop with a shredded track. His day was done.

Within moments of loading his sled onto the trailer, a report from race radio said that Ekre had also blown a track and was out of the race. 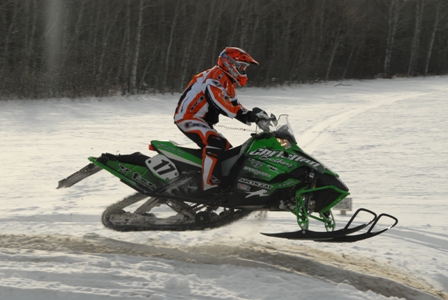 Fears kicked into overdrive when Chad Kyllo, who was in good position to win the Semi Pro class, was reported out of the race…with track failure. 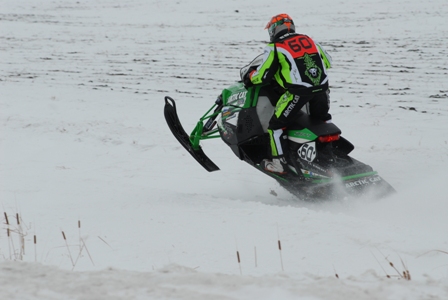 Ebert had moved into second place behind Ekre prior to Ekre’s track blowing, and inherited the lead. When Ebert came into the second (and final) fuel stop, his dad asked him if he’d heard his track ratcheting.

Mechanically wise like his father, and with Polaris racer Gabe Bunke hovering in second place only couple minutes back, young Ebert understood the gravity of the situation.

He headed out for the final 50 miles of the race, hoping for the best. 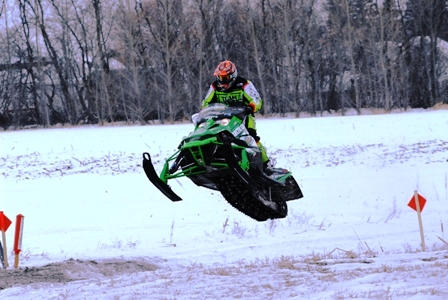 Having competed in his first I-500 the previous year, Ebert knew he couldn’t ride too cautiously or too crazy. If he was going to make it to the finish line in first, he would have to ride the fine line. 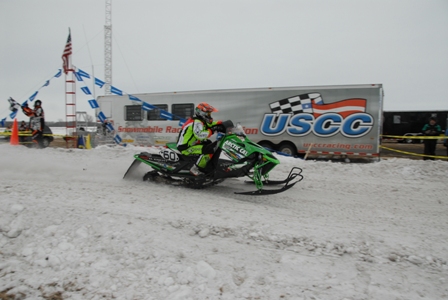 After what seemed like an eternity for Dan, his dad and the entire Team Arctic camp… Ebert flew down the ditch and across the finish line with a cumulative time of 8:11:35, scoring his first-ever cross-country win…and the biggest victory of his career. 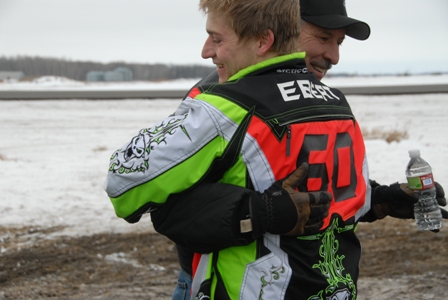 A last-minute decision by the Eberts to race the I-500 proved wildly worthwhile, and the father and son share the joy (and relief) at the finish line. 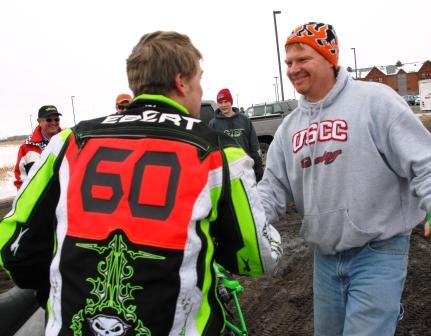 USCC President Pat Mach was one of the first to congratulate Ebert. Mach and his amazing crew put on an incredible race. With 124 entries and some very interesting people in attendance this year, the I-500 is on a path to once again becoming the most important race in snowmobiling. 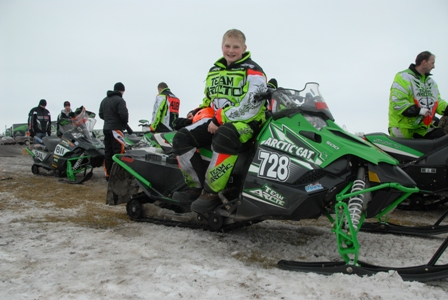 Finishing the I-500 is a monumental achievement, as 15-year-old Zach Thoma of Clearbrook, Minn., learned. A fresh batch of young racers like Thoma raced the I-500 this year, indicating good things for cross-country. 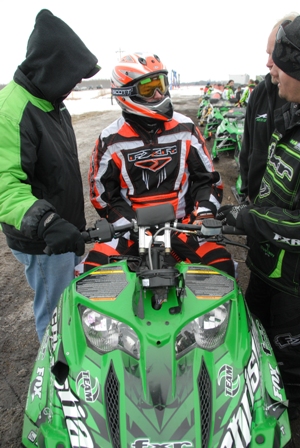 The only solace for Christian Bros. Racing was Trevor John’s win in Expert 85. Trevor hit a drainage ditch at 75 mph on the final day, putting just a SLIGHT forward bend in the handlebars. He was stiff, but okay. 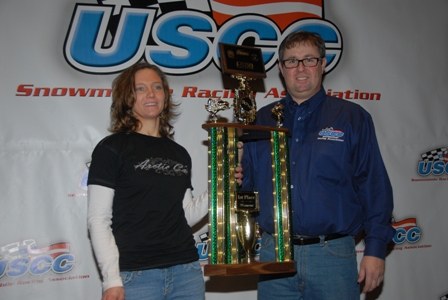 The most decorated woman in cross-country history — Jolene Bute — won her fifth I-500. Despite a couple tumbles on the third day, Bute was all smiles when receiving her trophy from USCC’s Chad Colby. 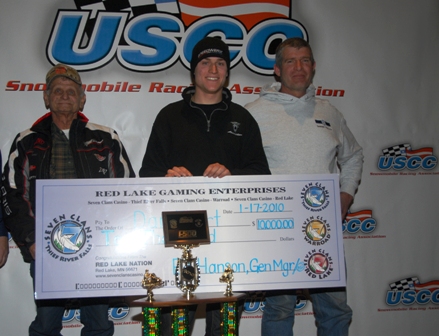 Dan Ebert is all smiles with a hefty check and his name in the record books. On his right is two-time I-500 winner Leroy Lindblad. And on his left is two-time winner Kirk Hibbert. Will Ebert join these two as a multiple winner of this famed event?

The following Team Arctic racers also won classes at this year’s I-500:

Congratulations to everyone who competed in the I-500! 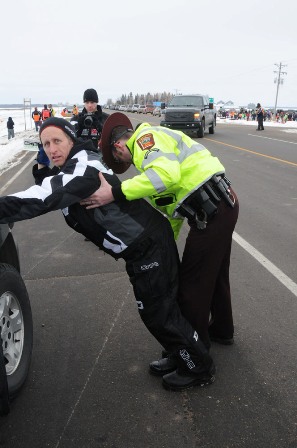 Anyone else see the ArcticInsiders at the I-500, getting hauled off to jail?