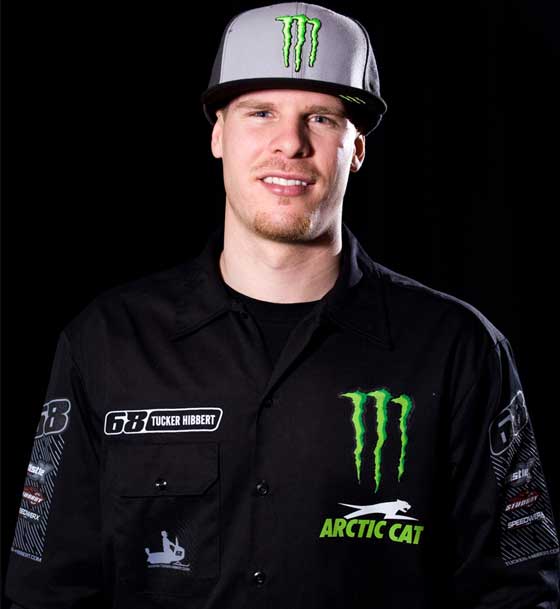 Tucker Hibbert returned to his winning ways this weekend at the second stop of the ISOC National Snocross Series in Bessemer, Michigan, with a convincing wire-to-wire victory in Sunday’s final.

With two separate events in one weekend, Hibbert won every heat race and was poised to win Saturday’s final until a broken part relegated him to fourth place.

I chatted with Hibbert on his drive back to Thief River Falls, while he was enjoying the satisfaction of returning to his favorite place in the snocross racing world: the top of the podium.

AI: Excellent job this weekend. Not only did you notch the win today, but you did it by grabbing a holeshot and appearing to crush the field… almost taking it easy. Is that how it felt?

Hibbert: I definitely felt fast, but I was definitely riding hard. My strategy this year is to charge hard early in the race, because last year there were too many finals where I started slow, took it easy for a couple laps, then had to make up a lot of ground to win.

So today I got the holeshot and charged really hard for a few laps andI put five seconds on Ross Martin, who was in second place. Once I had that gap, I backed it down a notch and just rode consistently. I found some good lines, got through lapped traffic pretty well, and ended up winning by 15 seconds.

AI: How many Hot Stuff Pizzas and Monsters were consumed in the post-race celebration?

Hibbert: (Laughing) I ate one-and-a-half Hot Stuff pizzas and drank 3/4 of a Monster. Other people were eating way more than me though, because Mandi made 10 Hot Stuffs and they were gone in a hurry.

Winning always makes people happy, but today it was extra special. Getting that first win with the new ProCross chassis was important and rewarding. Rebounding from the disappointment of Duluth felt really good. This weekend everything worked the way it was supposed to and the way we plan for. And if it wasn’t for a fluke broken spindle on Saturday, I’m confident we would have won both finals.

AI: Tell me what went on with your team the two weeks between Duluth and Bessemer?

Hibbert: Having those two weeks helped us get prepared the way we needed to be, but weren’t able to do for Duluth.

We had some stuff going on that prevented us from doing a lot of testing the first week after Duluth (Tucker’s grandpa passed away, so his mom and dad were out of town for a week. –Ed.), but the testing we were able to get done was really productive, which made some big gains with the sled and me. It was like a switch got turned on, and everything started to click. We went into Michigan with everything working and ready. I felt confident, fast and fully-prepared.

AI: Where did you make your gains…sled, rider?

Hibbert: Pretty much everything.

Going into Duluth, we were spread too thin. We didn’t have any real testing… my preparation wasn’t great… none of us were rested from running on minimal sleep each night for nearly three weeks… the sleds weren’t dialed.

So in the two weeks since Duluth, we focused on all those things. Everyone on the team got stuff done, got decent rest and we felt the gains in all aspects of our effort.

AI: How different is your sled from what you raced in Duluth?

Hibbert: We made huge gains in suspension calibration which allowed me to be more comfortable on the sled and go faster. Like I said before, we didn’t have a lot of test time after Duluth, but it was productive testing.

We left Duluth knowing that we had to work on suspension calibration. I spent some time at Quadna testing, which was a good start. Then last Tuesday and Wednesday we tested at the Christian Bros. Racing track in Fertile, Minn., and made strong improvements. We ended up going stiffer with the suspension and we changed some things on the front end to get it to handle and steer better. I think those changes also translated into better holeshots.

AI: I know it’s still very early in the development cycle, but how did your sled at Ironwood compare with your Mod sled from last year?

Hibbert: It’s kind of hard to really know because I haven’t ridden the old one, but the way my sled felt at Ironwood…it seemed on par or better than where we were last year. Like I said before, we made big gains for this weekend. But we’re actually going to test against last year’s sled to see for certain how the new one compares. 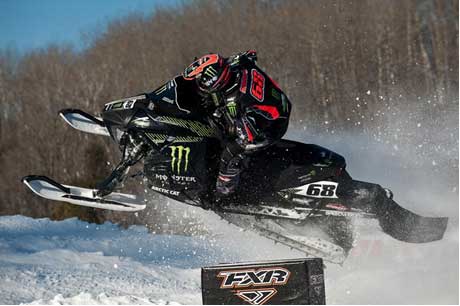 AI: Take us through Saturday’s race at Bessemer.

Hibbert: I felt great on Saturday, winning both heat races… getting great starts, and was the number one qualifier. I lined up on the inside for the final and got the holeshot, but got tagged in second corner, which turned my sled sideways and pretty much came to a stop.

I came out of that situation in fifth place and started charging. I got into fourth place right away, but then I got stuck behind Tim Tremblay and Robbie Malinoski, which allowed Ross Martin to get further ahead in first.

Once I passed Tremblay and Malinoski, I charged up to Ross and put a pass on him for the lead. But our sleds contacted, which ended up breaking one of my lightweight spindles that we apparently lightened up too much. I felt it immediately and just had to go super-easy, pretty much just limping around the track for the last couple laps. I ended up fourth, which was kind of a bummer because I felt like I had the win if the spindle hadn’t broken. Of course I don’t know that for certain because I could have crashed or something could have happened, but it sure looked like I had the win.

AI: What was the mood in trailer after that?

Hibbert: I wasn’t mad. Really, it’s just one of those things that happens. It’s part of racing. We tried some stuff on the spindles and we didn’t get it quite right and it broke.

The whole situation motivated me today to try to win even harder. I wanted to prove to myself, my team and the other riders that we were there to win. So breaking yesterday was disappointing, but it didn’t set us back in any way. 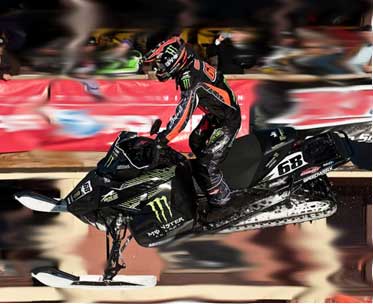 AI: Any changes to the sled from Saturday to Sunday?

Hibbert: Nope, we ran the same package. We went out in Sunday’s practice with some suspension changes, just to confirm our settings from Saturday. Those changes didn’t improve anything, and weren’t quite as good, so we went back to Saturday’s set-up for the heats and final.

AI: Your heats were spectacular all weekend.

Hibbert: Thanks, I really felt good every time I hit the track. Actually, one of my strategies this year is to charge harder earlier in each race, as well as focussing on winning my heats. Last year I wasn’t winning my heats so much, which hurts for the championship because I missed out on valuable points. This year I’m focused on winning heats and finals, so winning all four qualifying heats this weekend was good.

AI: You have almost a month until the next race at Canterbury. What’s on your agenda?

Hibbert: It’s going to get really busy with testing, which is a good thing. We’ve got tons of ideas, but they need to be tested. We still need to test more with handlebar position, seat height and shape, all those points of contact that really help get the sled to fit me the way that works best for me. And because it’s an all-new sled, those elements take time.

We’re also going to work on the handling and cornering. That’s a never-ending pursuit even with a well-developed sled. But on a new sled, testing those things is actually more time consuming because you have to figure out how to improve each area without sacrificing another.

So for the next month we’re going to be busy testing and practicing.

On top of that, my dad will be in Sweden for a week at the Team Arctic race school there. So while he’s gone I’ll have to figure out my schedule for the rest of the season. The World Championships were just rescheduled from March to February, and they moved to Russia. I’m not sure yet what our plans are, so we need to figure that out.

But for right now, I’m excited about getting home and going to sleep.