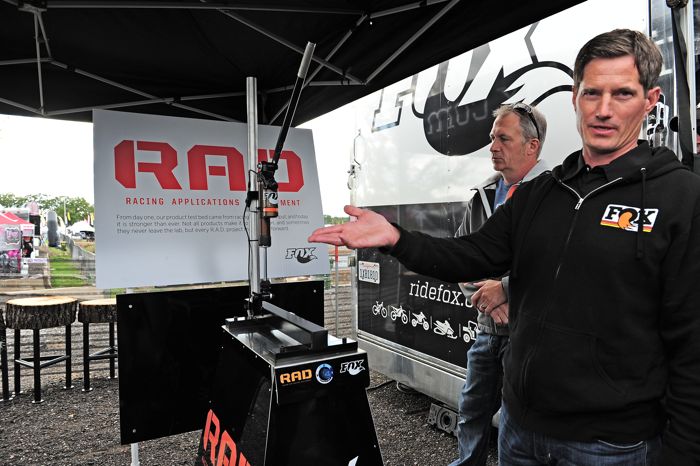 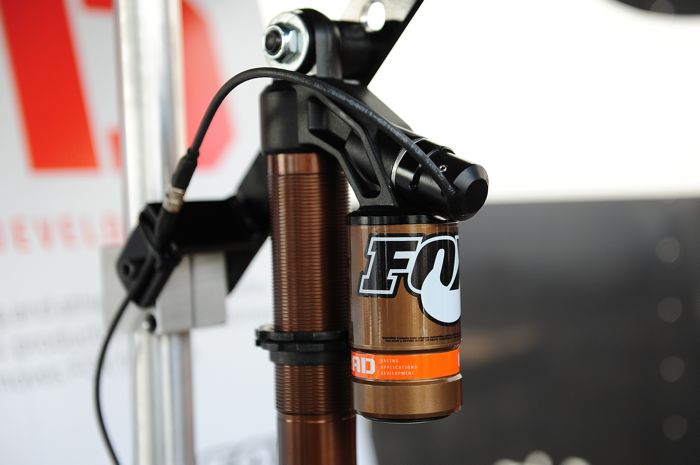 FOX Shox unveiled a new prototype electronic version of their QS3 shock system at Hay Days this year, effectively ushering in the next era of simplified suspension control. 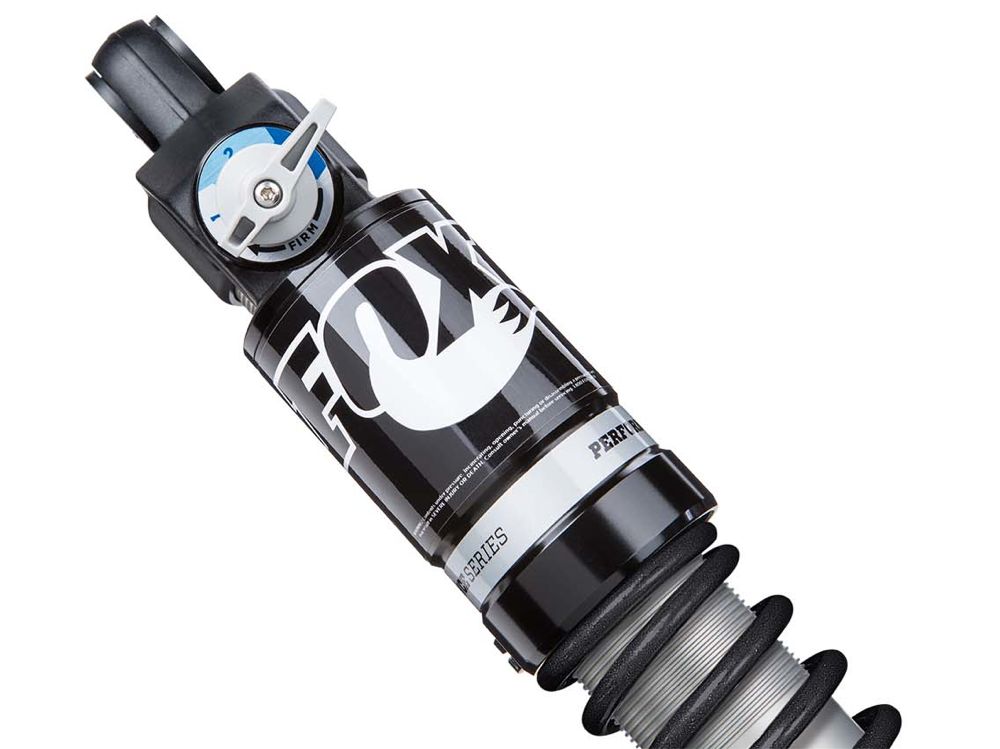 For review, QS3 (above) is the newest adjustable shock technology from FOX. A small dial/lever offers three-position adjustability via your hands and corresponding to soft, medium or firm compression performance. These remote-reservoir shocks come on the skis (in coil-over form) and rear track of 2016 Arctic Cat ZR Limited and El Tigre models, plus they’re available from Arctic Cat accessories in both ZERO coil-over and FLOAT 3 EVOL form (each with Kashima coating).

QS3 shocks were an undeniable hit for the snowmobile media (including myself) who experienced them last season, as the simple, effective adjustability allows you switch between what is essentially LXR-Sno Pro-RR compression valving in just seconds, albeit by getting off the sled and manually moving the dial.

For me personally, it’s a system I’ll use frequently, perhaps every ride, as I’m constantly varying my riding style between LXR and Sno Pro, with occasional dips into the RR zone. 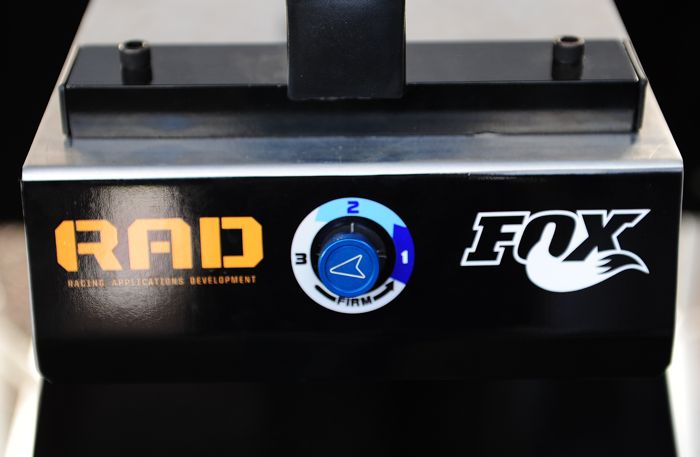 The new RAD system simplifies the adjustment process by adding electronics, enabling the rider to switch between the three settings on the fly. A handlebar-mounted switch will control all four shocks (yes, FOX will have QS3 on the front track shock too and no, this switch will NOT be the production unit).

In discussing the new system, FOX engineers kept using the word “fidelity” to explain the benefits of the RAD system. Simply put, being able to switch valving on the fly enables riders to better feel the differences between each position. And by making switching so easy and quick, riders will actually utilize QS3 more frequently, as conditions change from one trail to another, or from different desired pace.

FOX says that the RAD QS3 valve-changing internals are the same as the manual system.

The current plan is that RAD will be available as an aftermarket option in 2017, both as a kit that will retrofit on piggyback-style FOX shocks from the past handful of years, or as an entire shock kit. Actual retail pricing won’t be known for awhile, but FOX said a kit with four motors and switches for someone who already has existing shocks will hopefully retail for about $1,000 U.S. 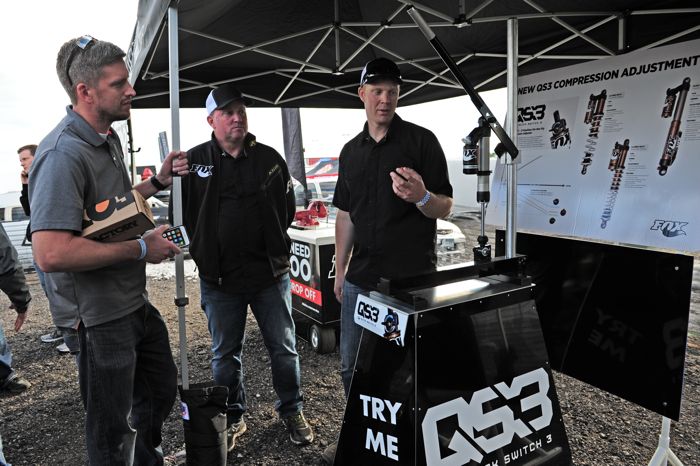 FOX also made it known that this is just the first step into what will be a much greater, more comprehensive future of electronic vehicle ride control, one that could/will include opportunities to control (manually or automatically) vehicle pitch, yaw, roll and more.

How about an automated shock system that automatically changed the track shock valving based on the hit taken by the ski shocks? Or ski shocks that automatically stiffen when the brake is applied, to prevent diving? The possibilities are endless, other than requiring LOADS of programming.

In the meantime FOX said that several athletes will use RAD this coming winter, and they extended an offer for journalists to ride the system. I’ll be first in line for that, so stay tuned for more. 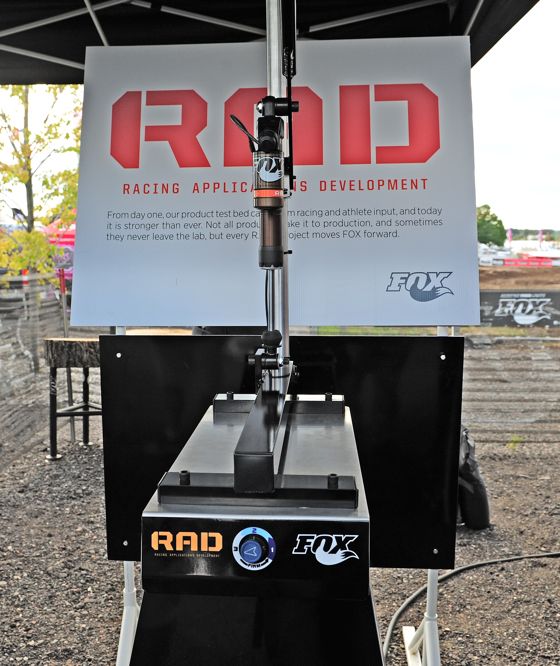