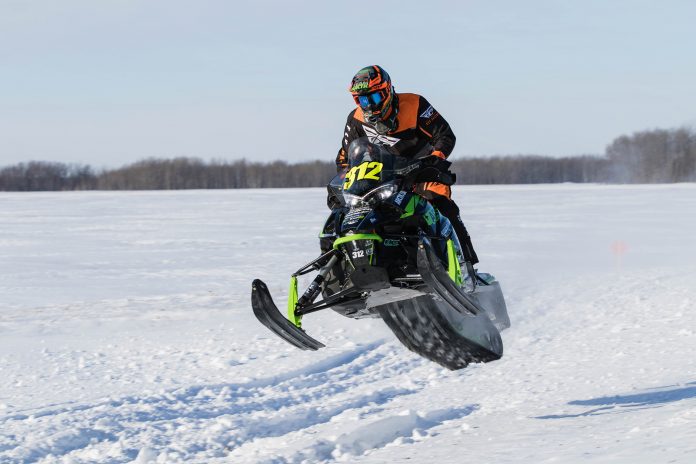 The following is an awesome report and photos of the I500 from Emily Wicklund/COR Powersports/RideX365.com Congratulations to Zach and Team Arctic! Nice run! – Kale

On Zach’s Herfindahl Racing page he said, “I-500 win #4…Still doesn’t feel real. And to top it all, first driver in I-500 history to win three in a row! I’m so proud of my team, I battled being sick the days leading up to the weekend and into Saturday and the guys went into overdrive to make sure everything was perfect for me to just come and ride.. and my Teammate David (Brown)… no questions asked is top notch. For people that don’t get to see behind the scenes, David rode my sled Friday to break it in and test clutching, I will always appreciate what these guys did when I was down and out, and I’ll always have their back. The Team Arctic green team is as strong as ever! Thank you to everyone for all the texts and comments, it has been a weekend to remember! Congrats to Dan Revering on his ride, we rode a wicked race on day two. Hell of a guy to battle with nose to tail!”

Forty below zero didn’t stop racers from saddling up for one of the most grueling races on snow; the I-500. For more than 50 years, this event has been ran in various forms with this year being hosted out of the Goodridge, Minnesota area. The event was held over two days with racers competing in 250 miles each day. Saturday and Sunday had a separate 125-mile marked racecourse that they made two laps on.

On day one, the 125-mile loop went north of Goodridge towards Skime. Racers made two laps on this loop with three mandatory fuel stops. Racers were allowed to make changes on their sleds while being on the clock, but the driver had to make all repairs with crews only being able to give parts or tools.

Dan Revering (Polaris) pulled the early race lead with Ross Erdman (Arctic Cat) following in second, Taylor Bunke (Polaris) in third, David Brown (Arctic Cat) in fourth, and Charlie Revering (Polaris) rounding out the top five. About half a mile from the starting line, pro contender, Ken Murphy, hit a hard rut in the field and had a roll over. He was okay and waited for help in the middle of the farm field that the course cut across. As sleds continued to start with snow dust being thick, a junior rider, Aaden Olson hit Murphy’s sled. Olson got the wind knocked out of him but got up and continued to ride. Further into the race, Olson pulled off the track due to pain and ended up sustaining a back injury.

About a quarter of the way through lap one, seventh place starter, Wes Selby (Ski-Doo), made his way into the third-place position on track. Another hard charger at this point in the race was defending I-500 champ, Zach Herfindahl (Arctic Cat), who made his way from 15th to fifth.

Racers continued to navigate the ditches and fields of Northern Minnesota and worked their way towards the start/finish line to complete lap one of two for the day.

After lap one, Dan Revering held the lead with second place running Wes Selby on his heels. After a quick fuel stop from Selby, he was able to take over the lead putting Revering back to second. David Brown came into the fuel stop third with Zach Herfindahl coming in fourth. Herfindahl was able to steal the third-place spot over his teammate Brown out of the fuel stop. Ross Erdman finished lap one in fifth but pulled off the track to take a DNF which put Justin Tate into the fifth place running position. The first Semi Pro sled to complete lap one was points leader, Evan Peppel (Polaris).

Wes Selby was then in second, Dan Revering in third, David Brown in fourth, and Alex Hetteen in fifth. Pro sleds held their positions through the final fuel stop for day one and made their way towards the finish.

Zach Herfindahl was the first sled to cross the finish line on day one with Dan Revering coming in second and Wes Selby coming through third. Since it is a timed event, the order they cross the line may not be the finishing order. After calculating times and credits/penalties, Dan Revering was the one to have the top time after day one. When Revering and Selby entered a fuel stop early in the day, there was an issue with the fuel manifold system that cost those two riders time that was out of their control. Revering and Selby were both given a time credit for the time they lost waiting for the fuel issue to be fixed. Herfindahl timed in second, David Brown in third, Selby in fourth, and Hetteen in fifth. There were eight pro DNFs after the first 250 miles of racing.

After having the top time going into day two, Dan Revering was the first to get the green flag again on day two.

The top five sleds left in the intervals that they finished yesterday. Revering got the green flag with Zach Herfindahl leaving 6.4 seconds back. David Brown left the line third 7 minutes 14 seconds after the first sled. About 10 second after Brown, Selby got the green flag. The final timed started was Hetteen 9 minutes 47 seconds out of the lead. After the top five sleds, the remaining sleds left as they did yesterday, 15 seconds apart.

Sleds made their way to the first fuel stop of the day with Revering being the first sled there and Herfindahl 20 seconds back. Selby came through third a few minutes back.

Racers continued on through a river section through Thief River Falls and then made their way back to Goodridge for the next fuel stop. Revering was the first sled into the fuel stop but Zach Herfindahl made it a quick stop and beat Revering out of the fuel stop. Herfindahl and Revering ran one and two out of Goodridge back towards the river with Selby still sitting in third.