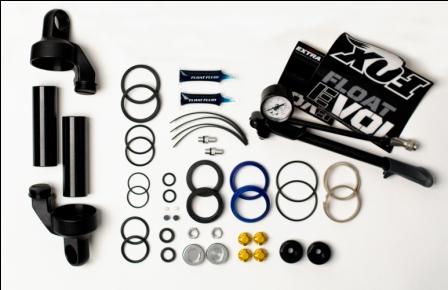 Of the many cool new products I saw at Haydays, one that really jumped out at me is the new EVOL Upgrade Kit for FOX Float Shox.

Designed, tested and built by FOX, the kit includes everything required to transform FLOAT or FLOAT 2 ski shocks into a FLOAT EVOL.

The FLOAT shocks that come on Sno Pro package Arctic Cats deliver stunning big-bump absorption and low weight, but the trade-off is that they’re a bit too stiff over trail chop when they’re calibrated for the big stuff.

The EVOL system lets the shock act plush over the small stuff, while retaining excellent damping during big hits. And it does this without body “roll” or a sacrifice in ride height.

If I were a high-powered Wall Street type who utilized a bunch of ’90s lingo, I’d say the EVOL kit is a “win-win.” 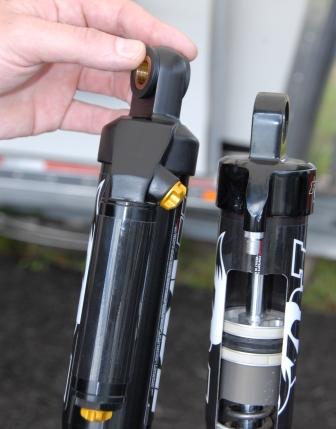 Unlike the aftermarket EVOL kits I’ve seen, which utilize the stock end caps and thus try to force the air flow through the too-small schrader valve , the FOX EVOL kit has true EVOL end caps with hogged-out, high-flow air ports. (Look at the difference in width between the air-passage area of EVOL cap on the left, with the passage to the schrader valve on a stock FLOAT in the above photo.)

The kit even includes the all-important gold-anodized air caps and black/white decals to draw the adoration and attention of jealous friends.

The kit retails for $350. Shocks can be sent directly to FOX for the $40 installation, and places like Speedwerx and other FOX outlets also do the good deed. Probably going to be an option with some service-oriented dealers, too.

I’ll be testing the upgrade kit this season on a F5 Sno Pro (I know, there’s no such production model, but I’m creating one via a set of FLOAT ski shocks), and will report what I learned. I’d also love to hear some feedback from anyone else who uses this kit.