Observations on the 2017 Cross-Country Race Season So Far

We’re two races into the 2017 USXC race season, and already Team Arctic has shown tremendous strength. If I were a marketing guru, I might even say they’ve been dominating the terrain.

So far, the terrain that’s being dominated is lake XC, at both the Gerald Dyrdahl Memorial 200 on Pine Lake, as well as Detroit Lakes.

This year, the early-season lake races have offered a variety of conditions. At Pine Lake, the entire 10-mile course was plowed down to the ice. At DL it was a combination of plowed sections mixed with long (and rough) snow, making for challenging set-up decisions as racers weren’t sure if was best to lower their sleds completely (to get around the ice corners as fast as possible, but suffer through the rough stuff) or to run somewhere between full- and lower-suspension.

Either way, both courses would reward speed and handling in roughly equal measure.

Just how did the ZR (and a few Sno Pro) Cats do on this terrain in comparison to the other three brands?

It was even better at DL, with Team Green claiming 17 of 21 class finals and 38 of 63 podium positions.

That’s pretty stunning when you think about it. It’s a testament to the racers and crews, of course, as well as the capability of the ZR ProCross sleds (most now with the 600 C-TEC2 EFI engine) and the focus that Arctic Cat still places on XC.

Every person who raced a green sled at Pine Lake and DL deserves a mention and photo here. Alas, today I’m focusing on those who won a class.

Lucas Houle didn’t win a class at Detroit Lakes, but he won the hearts and respect of every person there, for having shown up and raced.

As most of you probably know, Lucas’s brother Hunter died as a result of a crash while testing at Pine Lake. Five Days after Hunter died, Lucas and his family held a beautiful funeral. Three days after that, Lucas was at Detroit Lakes, supported by his parents Steve and Charlene, his brother Jeremy, and everyone else who was there.

That Lucas and his family were even at Detroit Lakes is remarkable. That Lucas put on his gear and took the green flag in Junior 10-13 was beautiful and touching and, I’ll admit, nervous (at least for me).

As Charlene told me later that day, “Racing is what we do. Lucas wanted to come and race, so we came and raced.”

I can only hope to someday have that kind of bravery and courage.

After a couple years of learning the ropes, Nicholas Nyquist busted through for his first career win at Pine Lake, in Junior 10-13.

I’ve had the great pleasure of watching the progression of racers like Nicholas, beginning with their first-ever races and continuing as they rise within the ranks. A new season always brings with it new storylines and success for a handful of racers. Seeing the sorting that occurs the first couple of events is always interesting.

Another new name to the top of the podium, Marshall Busse claimed the win in Jr. 10-13 a week later at Detroit Lakes. Congrat’s Marshall!

Blaise Potucek is another racer I’ve watched since he was just a squirt. Now he’s jumped into the Sport 85 class, where he took the win at the Pine Lake opener. Blaise comes from a whole family of racers, and I have a feeling we’ll see his name at the top of the results for many years to come.

Sara Larson is no stranger to winning, having done so in the Girls and 120 classes for many years. She won the Jr. Girls 14-17 at both Pine Lake and DL.

We all better get used to hearing about ANOTHER Herfindahl winning all the time in XC! Marcus Herfindahl, second -cousin (I think) of Zach, has three wins and a second place in Jr. 14-17 and Sport 85 so far this season. Hmmm…second-cousin Zach has the same finish record so far this year. Must be a conspiracy.

Gary Tintes is so old that he only knows how to race leaf-spring sleds. It’s a good thing too, because Gary won the old guys’ vintage class twice this season.

Brian Brown is another old codger. Or, maybe more accurately, he’s a Classic old codger, because he won the Classic IFS 50 Plus at both Pine Lake and DL.

Steve Martinson isn’t quite so…aged. Nevertheless, he still knows how to pilot his sinister-black ZR to victory in the Trail class twice this season.

Some of the best, most hotly contested racing of the young season is occurring in the Expert 85 classes between Ean Voigt (left) and David Brown. Brown is new to the class, having done a lot of winning in the Junior category in previous years, while Voigt has been one of the class leaders for at least a couple seasons.

In four finals so far, it’s Voigt with three and Brown with one. Truly great stuff between these two.

Dalton Fredrickson is another rider who jumped up to the 600 class from the 85-hp classes without missing a beat, winning Semi Pro Improved at Pine Lake.

Dalton has one of the coolest sled wraps too! 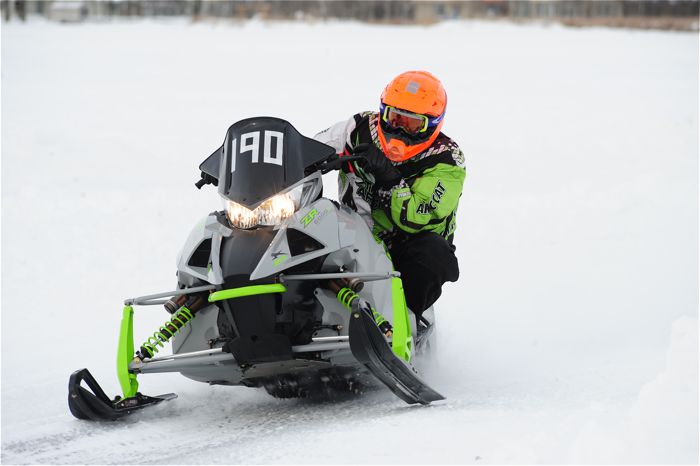 Jon Arneson has been winning cross-country races since the old red-sled/rear-engine days. Well, maybe that’s a bit of an exaggeration, but he’s been winning for as long as I can remember. He did it again in the Masters 50 Plus class at Pine Lake.

Erik Nymann was the Master 50 Plus winner at DL, looking far more Master than 50 plus (if you know what I mean).

Tyler Oettinger is still pretty new to XC, but he’s got style and speed aplenty. Yes, he kept the sled upright here AND went on to win the I-500 class.

I would say that Ryan Trout has established himself as the guy to beat in Semi Pro 600. He won the class at both events, and he went 1-2 in the I-500 class as well.

Wes Selby has been on injured reserve this season after breaking his wrist at the ISOC snocross in Colorado. I’m reluctant to say nice things about him because I wish he’d let his wrist heal AND he needs to stop slapping his decals on my various vehicles. However, with some careful wrapping of his wrist by Kate, he’s been able to race. And not just put around the track either…the nutball won the Pro Open class at Pine Lake, finished third in the same class at DL and took a pair of sevenths in the Pro Stock class.

Wes, if you’re reading this, please be careful!

Which brings us to the cross-country juggernaut known as Zach Herfindahl, who somehow managed to find yet another gear this season. Fast, smooth, intense, focused, talented…Zach is the complete package. He’s 1-1-1-2 in Pro finals this season, and I see nothing stopping him from winning a pile more.

Tomorrow he and all the other USXC racers will be off the lakes and onto the trails and ditches near Park Rapids, followed by the Thief River Falls 300 and then the famed I-500.

If the rest of the season looks anything like the beginning of the season, it’s going to be a very green year in cross-country.

Thanks to all the Team Arctic racers and teams.

Team Arctic Results from the 2017 USXC in Detroit Lakes, Minn.

Team Arctic Results from the 2017 USXC in Pine Lake, Minn.