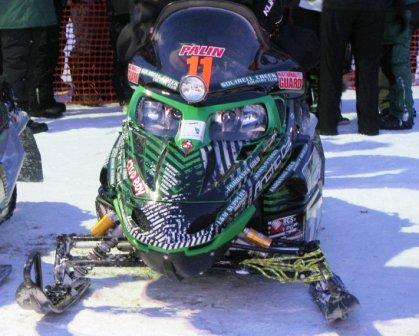 This photo tells the story of why Todd Palin and Eric Quam came in second place in the 2011 Iron Dog cross-country.

TEAM ARCTIC SCORES SEVEN HILLCLIMB WINS, AND AN “ALMOST” IN THE IRON DOG

February Ends with Wins and Heartbreak

The hillclimb success underlined the all-around versatility of the team and its M Series snowmobiles, with wins notched in everything from Stock to Mod, from 600 to 800 and Open classes, and in Pro, Womens and Semi Pro divisions.

“We take great pride in the fact that our racers win in every engine category and across all divisions,” said Team Arctic Hillclimb Coordinator, Al Shimpa. “Grover Park was one of those rare occasions when Team Arctic didn’t dominate. The racers and crews might be slightly disappointed with not winning the usual 12-or-more classes, but they still performed great and will rebound at the next event.”

If there was a twinge of disappointment in at the Grover Park Hillclimb, it paled in comparison to what Todd Palin and teammate Eric Quam experienced in the final miles of the 2011 Iron Dog.

With a 13-minute lead going into the final stretch, the duo was poised to win this classic event. But an unfortunate encounter with an ice-heave with less than 100 miles from the finish broke the front suspension of Palin’s F6. They were able to limp-in the sled to the finish, but not before being passed and finishing seven minutes behind the winning team.

Finishing third in the Iron Dog was the father/son duo of Scott and Cory Davis, who were roughly nine minutes behind Palin/Quam. Of the 12 Pro teams that finished the Iron Dog, five were aboard Arctic Cat.

“It was a heartbreaking finish for Todd and Eric,” said Mike Kloety, Team Arctic Race Manager, “Yet they, the Davis’s and all other Team Arctic racers did a phenomenal job at this year’s race, which is being hailed as one of the most difficult in its storied history.”