As has been the case for more than two decades, the first race of the 2012-13 snocross season offered some insight on the sport, the riders and their machines.

I went to Duluth seeking to understand where Team Arctic stood compared not only to the competition, but also to last season.

Why compared to last season? Because for a team accustomed to winning proportionally more races that their investments in the sport, last season was a disappointing eye opener. Compared to the fully-developed competition, the then-all-new ProCross-based race sled was rough around the edges and in need of testing, calibration and improvement.

But that’s exactly why Arctic Cat races. And the investment to race a production-based snowmobile will pay off in ways that will benefit the racers and us regular riders.

So did the increased ground clearance, wider ski stance and other improvements to the 2013 Arctic Cat Sno Pro 600 make a difference for Team Arctic?

Without a doubt! Even if the final results don’t show it. 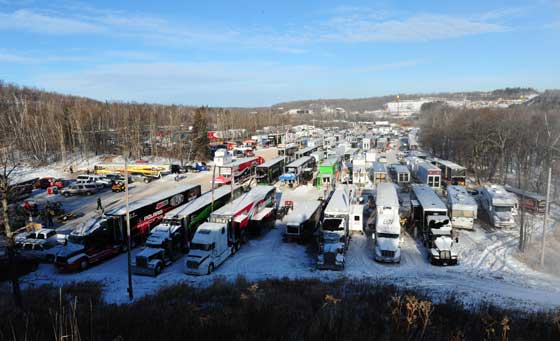 If the size and number of race transporters is an indicator of sport’s health, then this photo suggests that snocross is strong if not robust.

More than 100 race entries in the Sport category harkened back to the happier time pre-economic meltdown, and hopefully indicates a better future.

I appreciate the pomp and wow of a pits filled with such investment, but I worry that snocross has become a sport mostly of wealthy families and teams. The days of showing up at Duluth with a 24-foot enclosed trailer were over about five years ago. I’d hoped that the climb out of the Great Recession would bring with it a downsized approach, but it doesn’t appear to have materialized. 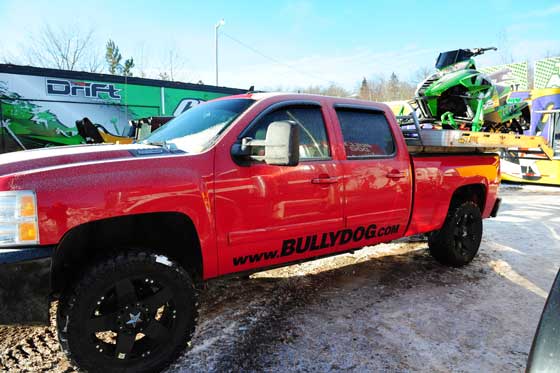 I suppose you can show up and race out of the back of your pickup truck, but spending $60k on your truck sort of defeats the purpose.

The new Team Arctic Support Trailer made its first appearance at Duluth and is a big improvement over the previous rig. 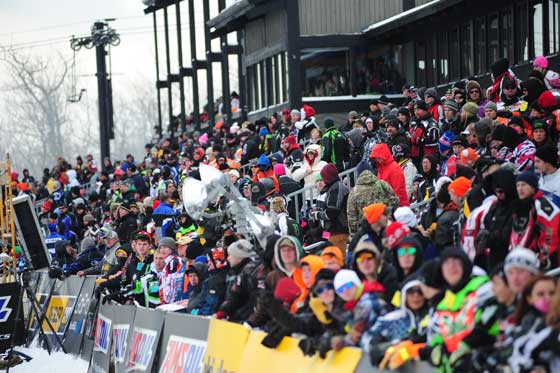 Every year the city of Duluth claims that 30,000-plus fans attend Duluth. I tried counting this year but ran out of time. I’d say that the crowd was smaller than previous years. The stands were never totally packed and there was only a small crowd at the top of the hill.

In an age where myriad social media bombard the plugged-in fan with hype and promotion of upcoming events, you’d think that Duluth would have more spectators than ever before. Maybe the fact that we can see a live-feed of each day’s racing, or make a few mouse clicks to see the results within moments of posting, is the reason why fewer people attend the races? 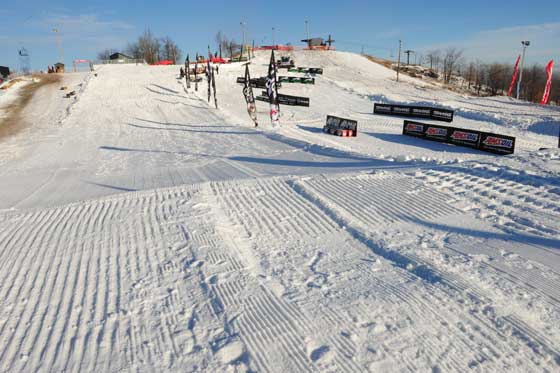 Warm temperatures the week prior led to a lot of nail chewing and hand wringing about whether to run the race. Officials made the right decision, but the consequence was a tiny race track with fewer jumps, dirt in the corners and almost no room to pass.

For a track that has never been great for “open” racing, Duluth set a new premium on the holeshot, which made for some of the least dramatic racing that I can remember. 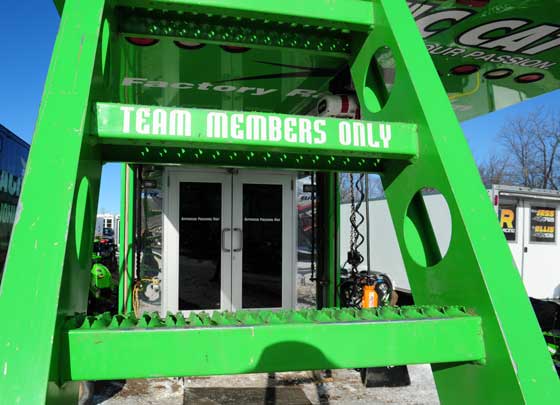 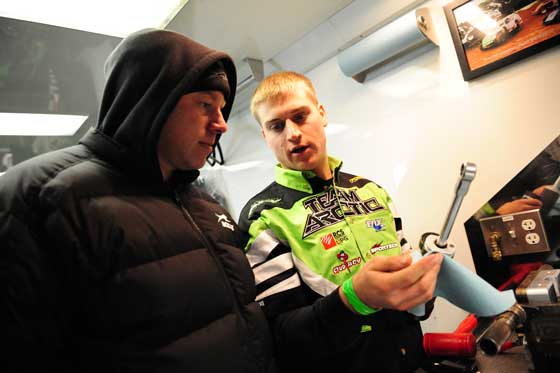 With only one week of testing the new machine (much of it without racer Cody Thomsen who had suffered from food poising) the Factory crew was surprisingly upbeat despite the seat time deficit.

In fact Ebert logged most of the seat time himself, and he was quick to point out that the new Cat Mod sled was leaps and bounds better than last year’s machines. 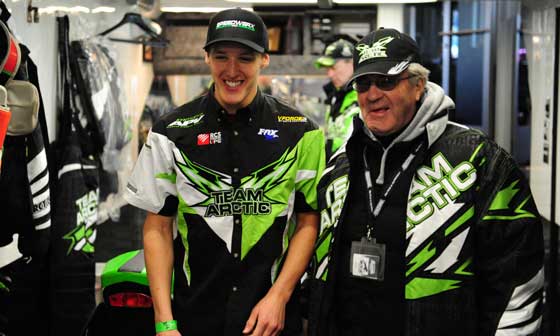 Last year at Duluth most of Team Arctic wore a look of concern and uncertainty.

This year there was smiles and laughter inside the trailers, as evidenced here by factory pilot Cody Thomsen (L) and Arctic Cat VP Roger Skime. 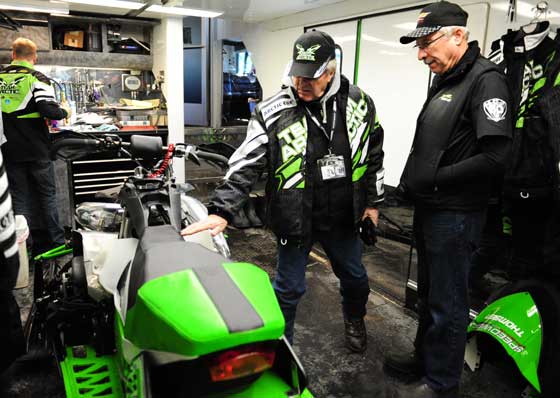 Rules in the Pro Open class allow for a lot of leeway on chassis. Last year the Cat riders went into Duluth with very stock machines and found themselves outgunned by other teams who came with fully-tricked out machines.

This year, Arctic Cat came to Duluth with lightened machines incorporating some new ideas. I like that. And every Pro Cat racer I talked to raved about the new machine. 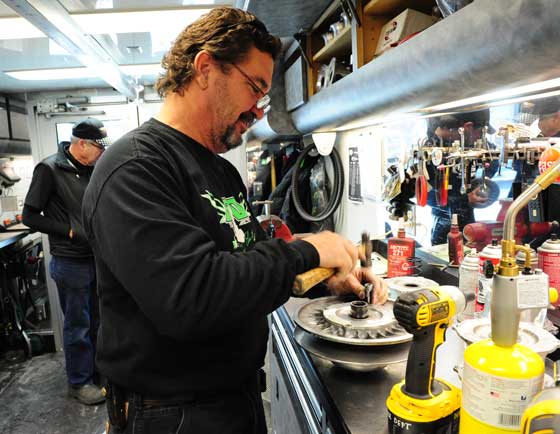 Steve Houle of Speedwerx is always a busy man at Duluth, floating between the trailers of all top Arctic Cat race teams to dial-in the clutching and discus the motor package they provide.

This year in the Pro class, the engine rules require a stock bottom end, cylinders and intake, but teams can change the exhaust and heads/combustion chambers. With the stock Sno Pro 600 engine producing around 130-hp with race gas, it’s probably safe to say that the mod engines are hitting numbers in the 150 range. 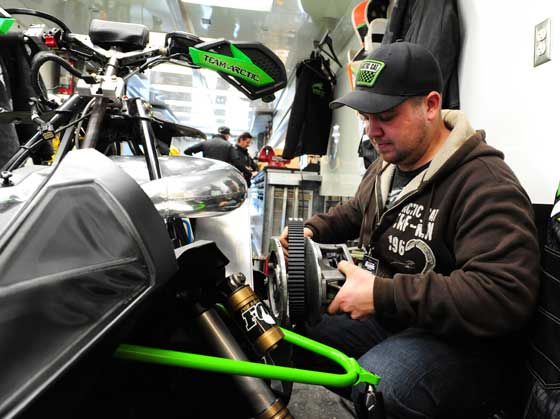 It’s good to see new people engaged as race techs, especially since the days of the racer-mechanic are now officially over. Guys like Dan Ebert and Mitch Rowland could very well become the Steve Houles and Kirk Hibberts of the next decade.

More smiles were seen inside Tucker Hibbert’s race trailer. Here Mandi Hibbert (L), Kevin and Tucker (R) chuckle following a rousing rendition of “Happy Birthday to You” sung by the crew to Mandi.

With big sponsorship expectations weighing on his shoulders (not to mention his own powerful desire to win), Tucker comes into each race season with a level of seriousness and responsibility that’s probably different and more demanding than most of his competitors. 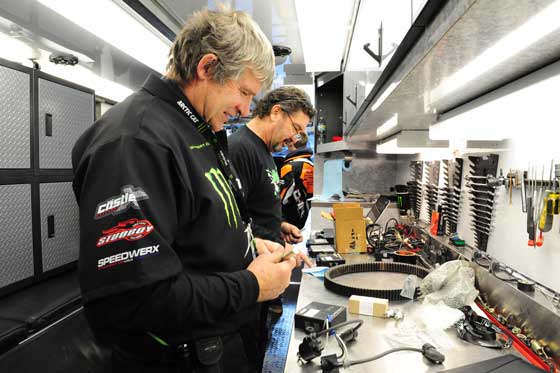 Kirk Hibbert was also wearing a smile on Saturday morning, and not just because Houle was telling jokes. 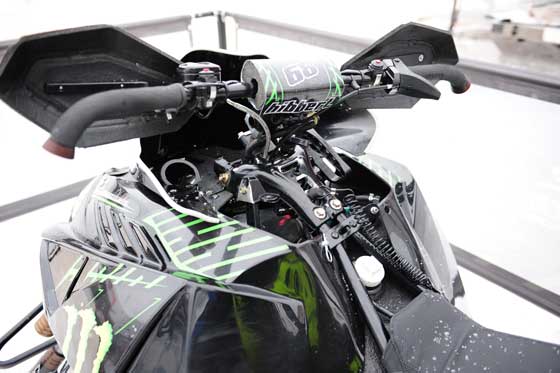 Train your eyes on Tucker’s sled and you will see creativity in the form of lightening and ergonomics. 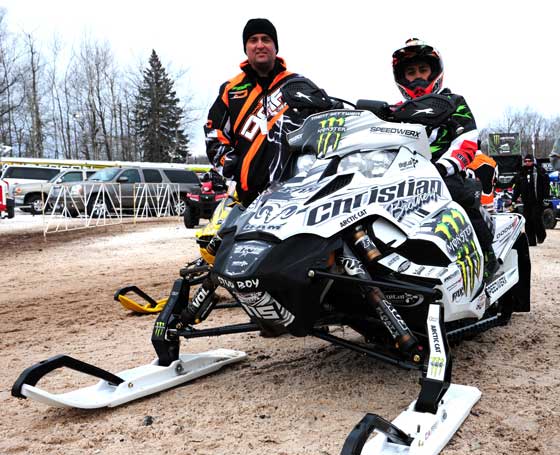 While the Pros get much of the attention, the Transition and Jr. classes hold the future of the sport. Here Jeff Wittwer (L) poses with his son, Trent, who has terrorized the 120 and Transition classes for the past several years.

This year Jeff is employed as a mechanic on the Arctic Cat Factory Team and responsible for helping to further develop set-up information for the younger classes.

Plus Team Green racers swept the Transition 8-12 final, with Carson Alread, Evan Christian and Taylor Cole going 1-2-3 (although Alread did it on a Ski-Doo Freestyle, darn it).

These racers might be the next generation of top pros. 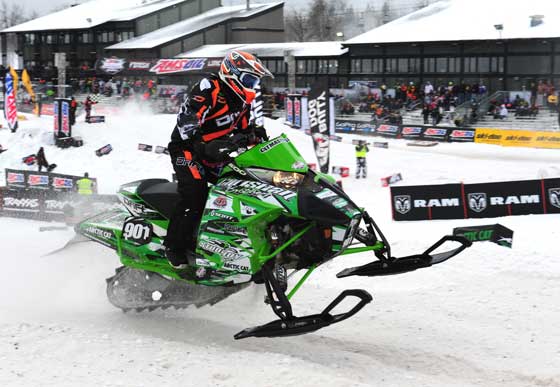 Joel Westerlund of Sweden is one of several Scandinavian racers competing at Duluth. He was one of a handful of Team Arctic racers in the Pro Lite (aka Semi Pro) class.

Like last year, Arctic Cat has far fewer numbers in the Pro Lite and Sport classes compared to the competition. It’s a conundrum that race manager Mike Kloety wrestles with: how to compete with teams who have upwards of twice (or greater) your budget? The answer “spend more” doesn’t magically make the purse strings loosen up, and so Kloety sticks to Arctic Cat’s long held method of growing its team from the grassroots.

The disparity in race budget is even more visible at Duluth, where 5-7 Canadian and regional race teams show up and their racers “downgrade” into smaller classes. I don’t understand how the top Canadian pros can show up and race Pro Lite at Duluth, but that’s what’s been happening the past couple years and that’s who wins.

Just as unsavory, there are other riders who are paid to stay in a lower class. I’m aware of one Polaris rider whose ability is definitely Pro Lite, but was offered free sleds only if he stayed in the Sport class.

All of this sandbagging produces a very unlevel playing field, especially at Duluth. Is it good for racing? 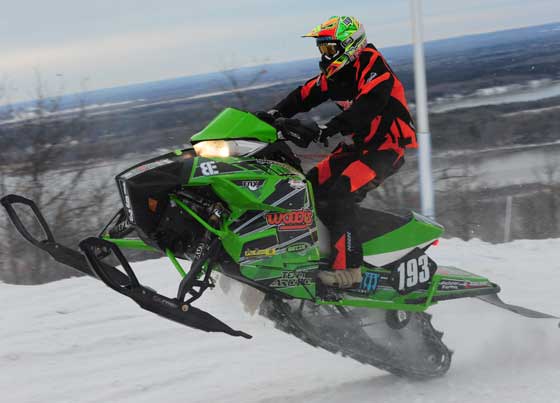 One Pro Lite Cat racer whose been trying to break into the top-five at Duluth is Matt Pichner, who made final on Sunday. 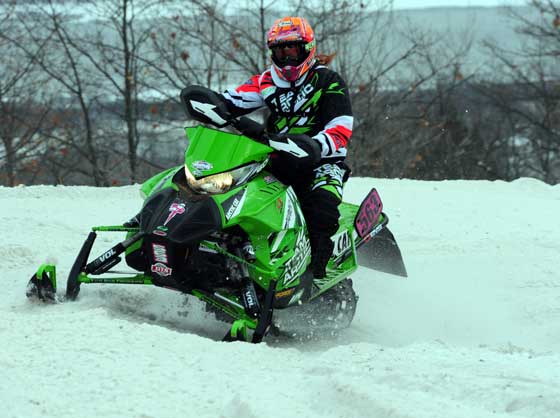 Last year Megan Campbell left Duluth injured. This year she left with a fifth-place finish in the Women Pro Am final. Much better, Megan! 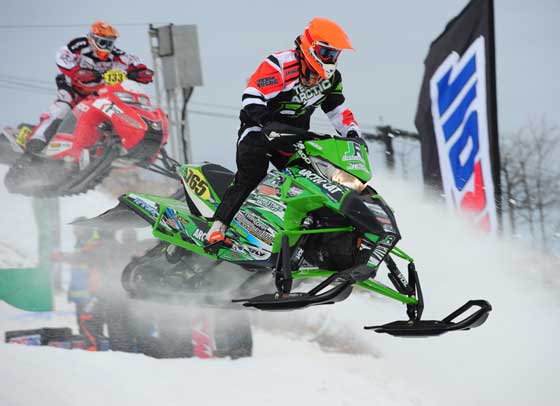 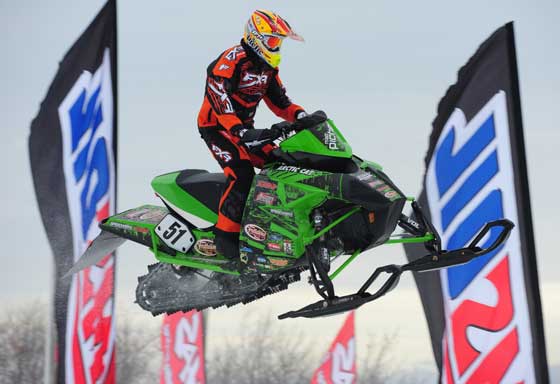 Matt Piche is one of a handful of independent Pro racers who can break into the top-10 on any given weekend. Unfortunately, it didn’t happen for Piche at Duluth. 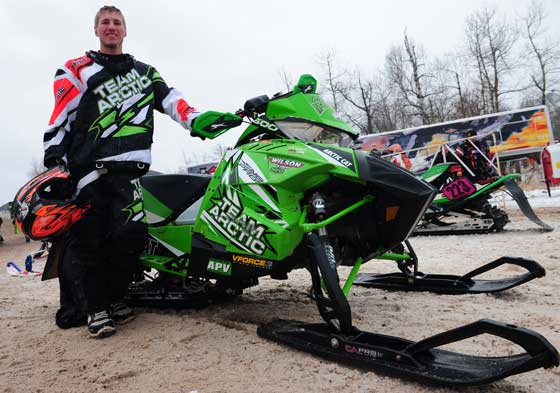 Having raced Ski-Doos for several years, Riley McClelland moved to Arctic Cat this season (in addition to jumping into the Pro Lite class) and is happy for the switch. When I asked him to compare the machines, he said the Cat corners better and is more predictable. He’s happy with the machine and is looking forward to getting some more seat time. 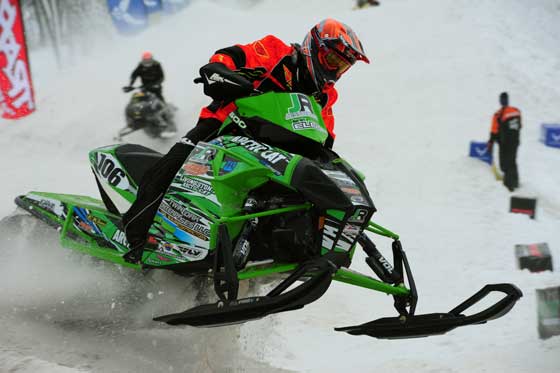 Another new face on Team Arctic is Pro racer Derek Ellis, who scored a 12 in Sunday’s final. 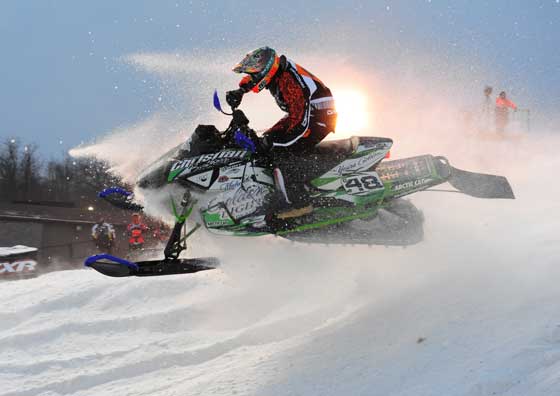 Christian Bros. Racing (CBR) Pro Garth Kaufman was the victim of some overly-aggressive racing at Duluth and didn’t make either final. 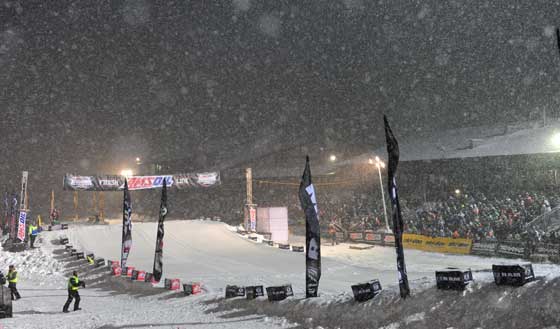 A Saturday night snowfall beautified the town and got the juices flowing for the spectators, but it made for some hairy visibility for the racers. 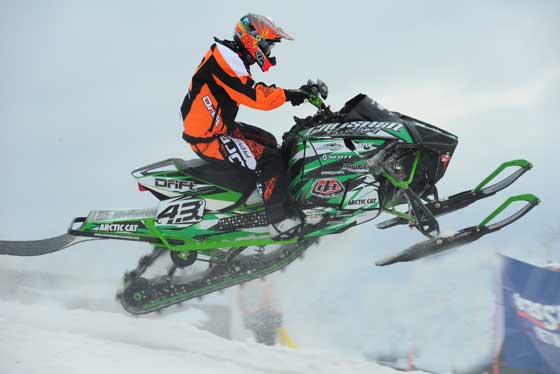 CBR’s Logan Christian is physically 100% and looking strong, finishing seventh in Pro on Saturday and 10th on Sunday. 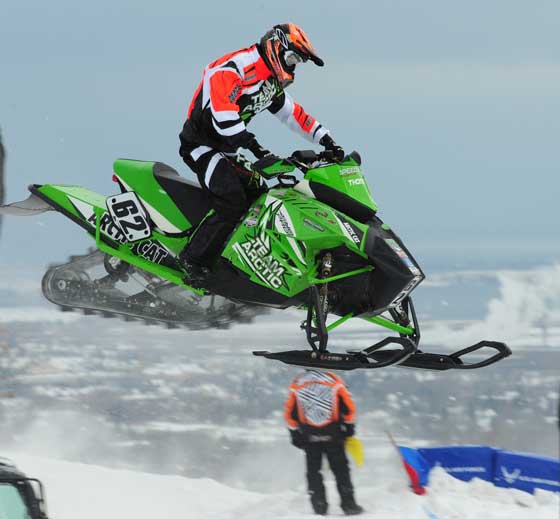 Factory Pro Cody Thomsen showed he’s more than ready to challenge in the Pro class this season, finishing fourth on Saturday. In Sunday’s final he was running in fourth when, after getting tagged by another racer, the torsion spring retainer on the skidframe broke and the spring speared the track, stopping him in his tracks. 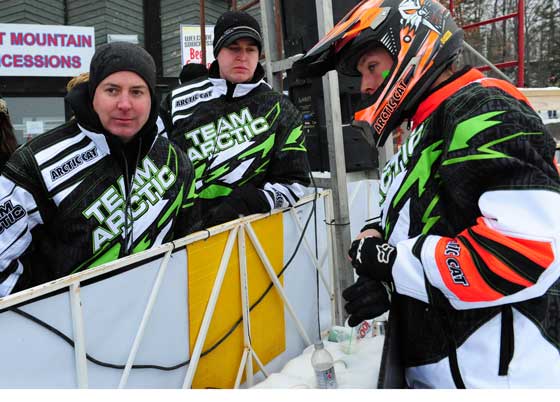 Thomsen has a cool head. And he’s fast, winning two heats during the weekend. 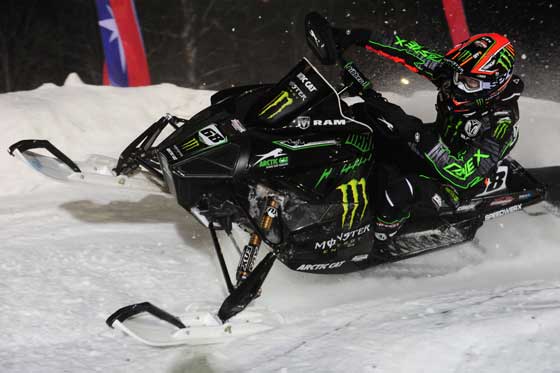 Coming into Duluth, Tucker Hibbert was feeling good. The lacerated kidney from last season is fully-healed; he’s happy with his new Mod sled; and he’s as hungry as ever to keep winning.

In Saturday’s final he found himself with a midpack start and only 24 laps to move up (on a track with very little room or features that allowed passing). He quickly worked his way into fourth, right behind defending champ Tim Tremblay, who is quite fast and difficult to pass even if he’s racing clean.

Tucker passed Tremblay once, only to get literally driven off the track a moment later. Back on the track, Hibbert once again quickly caught up to Tremblay and passed him yet again. But then disaster struck, with Hibbert uncharacteristically falling off on the uphill straight. He remounted and finished fifth. 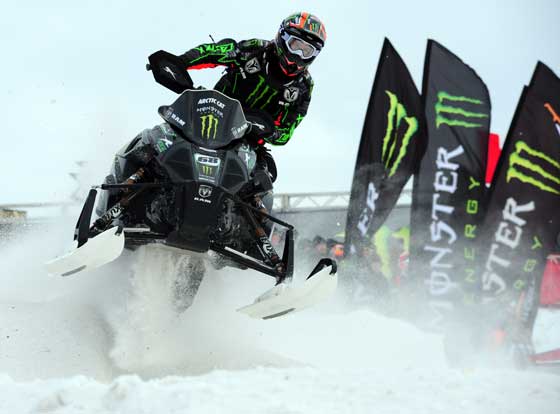 On Sunday Hibbert suffered more bad luck. On the first lap of the final, his skis were run over which bent a steering arm, causing massive toe-out (spreading) of the skis. With his sled drastically darting, Hibbert spent the next five laps deciding whether or not he should pull off. Once he made the decision to stick with it, he moved through traffic and into fifth place.

Hibbert was the fastest racer on the track all weekend long. He was only lacking a great holeshot, which his competition has figured out and used to great advantage on a small, far-from-decent race track.

Hibbert’s results at Duluth were in many ways indicative of all of Team Arctic’s: They don’t look stellar on paper, nor do they reflect the ability of the riders and sled.

While the Duluth results look very similar to last years, there is a very different outlook for the remainder of the season.