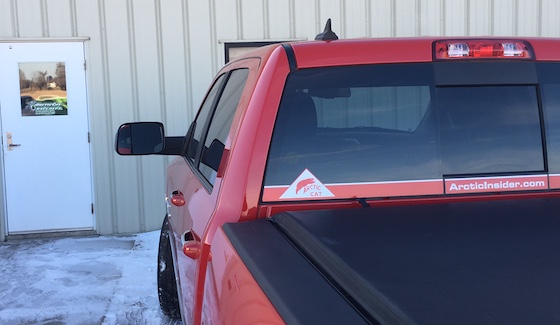 I made a seriously quick up-and-back trip to the Race Department to pick up my new 2021 ZR Blast. Spending 10hrs in the truck went by like nothing, and leaving TRF I feel re-energized for the start of winter and snowmobiling.

Im not sure why, but Ive always enjoyed seeing the Team Arctic race sleds awaiting pick-up or shipping at the Race Department. Sounds childlike, but I envision them modded, stickered with team graphics, and capturing checkered flags across the country. Pictured above, are a few ear-marked for Zollinger Racing – Team Arctic’s Western Hillclimb racers.

Also in the stack are snowmobiles for #17 David Brown and #312 Zach Herfindahl. Both Team Arctic Cross-Country racers will be racing out of the Factory for 2021 season like they did last year.

On my drive to TRF, I had a phone conversation with Logan Christian, #43 Pro Snocross racer for Christian Bros Racing. Logan expressed excitement to pick up CBR’s new ZR 6000 R-SX snocross sleds at the Race Department that day, and also his excitement for the upcoming snocross season. (scheduled to start January 8-10 at ERX Motorpark in Elk River, MN)

I was hopeful to cross paths with Logan at the Race Dept, but timing wasnt in my favor. The 2021 ZR6000 R-SX race sleds were fresh off the factory line, and were delivered to the shop as I was leaving.

And speaking of Christian Bros Racing, I also talked with Aaron Scheele who was on his way to CBR’s shop to start wrenching on the 2021 ZR6000R-SX. Aaron’s son, Anson will be racing out of the CBR trailer again this season. Aside from racing, Aaron filled me in on a couple vintage mod projects he’s been working on at home…I will definitely be paying him a visit and sharing those builds here in the near future!

I missed Logan, but I did get to spend a bit of time with other friends, including Mike Kloety, Team Arctic’s Race Manager. With stacks of snowmobiles arriving for pick-up, Mike was busier than a squirrel at a nut factory. Upon my arrival, Mike bundled up, we went outside, found my ZR Blast and he was kind enough to let me uncrate it, so I could get it up on its legs to put in the back of my truck easier.

If you’ve ever wondered how snowmobiles are crated and shipped, this is pretty representative of most models. Skis are off, as are shocks, and the rear skidframe torsion springs are off the perches. Additionally, windshield is off, and all parts are boxed along with acid for the battery that needs to be filled and charged.

About the time Mike and I got the ZR Blast into the shop, Zach Herfindahl walked in along with his friend and mechanic Hector (Not pictured). It was great to see both of them, and even better timing for me as both pitched in and helped quickly bolt on the Blast’s skis and shocks.

Both Zach and Hector joked this was their “first day of work” at the Race Dept for the season. A short time later, Corey Berberich arrived, who is also a longtime Factory Arctic Cat mechanic. This team will be working on buttoning up some of the race sleds in the shop, and will quickly transition to building the 2021 R-XC units for Zach and teammate David Brown.

If you’re in the Team Arctic race shop, you gotta take a few photos. Zach gave me the rundown on his SOO Mod. There are so many cool pieces on this sled, and visually, the most striking are these twin pipes.

#17 David Brown’s R-XC from last season was being put back together and may be used at certain races this season.

Next to Herfindahl’s SOO Mod, was #15 Wes Selby’s R-XC from last season. I talked to Selby on my truck ride, and he is undecided how many events he’ll race this season, but is definitely excited about competing. He’s thinking of focusing on the lake races, I500 and SOO 500.

Mike helped an old-man’s back out (mine) and fork-lifted the Blast into the back of my truck. While Zach and I were admiring the Blast, Ben Langaas arrived on his lunch hour. For me, Ben’s enthusiasm for building and racing performance snowmobiles is infectious. It excites me to know, and spend time with, young engineers who live to race the snowmobiles they design. This is the same enthusiasm Ive seen from engineers like Brian Dick, who works closely with Ben.

Before leaving town, I stopped in for a quick visit to see my old pal, Joel Hallstrom. Joey updated me on how well Mission Trailers were selling (Company he works for) and how his kids were taking after him and racing Arctic Cat’s in various cross-country circuits including COR Powersports. The photo above, Joey was sitting on his daughter Gabby’s ZR she’ll race this season. Gabby did extremely well in the Junior Girls 14-17 class last season.

Also in the shop with Joey, was his son, Jesse who was starting to work on his R-XC he’ll race at Pine Lake in a few weeks. Like his older sister, 15yr old Jesse did extremely well last season in various classes including Junior 14-17 and Expert 600 Limited. It’s cool to watch youth like Gabby and Jesse rise through the ranks with success. I wish them well this season, and all the other Team Arctic racers!