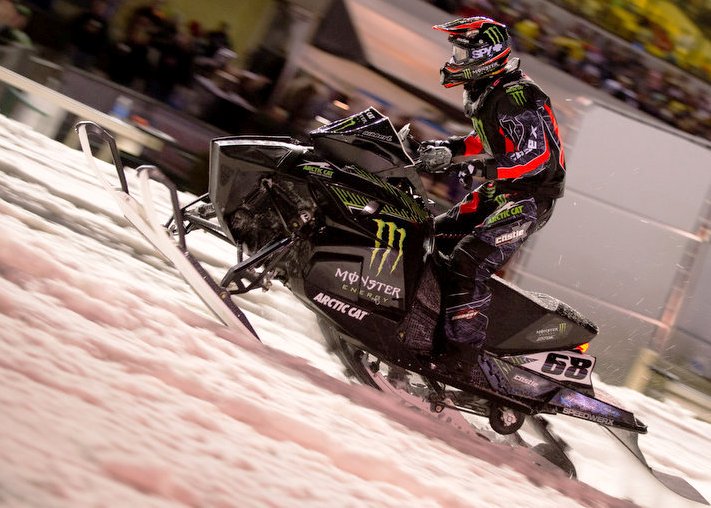 Monster Energy/Arctic Cat’s Tucker Hibbert rode fearless Saturday night in front of a record crowd at Canterbury Park Racetrack in Shakopee, Minn. to win his 68th career Pro national snocross final event. Nearly 12,000 fans were on their feet as Hibbert rallied through the field taking chances to clinch the top step of the podium. It was a milestone win for Hibbert who has raced with number 68 his entire Pro career.

With no snow in the Minneapolis area, the ISOC National Snocross Tour track crew worked overtime to pull off the race. Luckily, the temperature dropped one night making it possible to run 3.5 million gallons of water through snow guns to build a national level track.

Hibbert qualified sixth for Saturday night’s Pro Open final after finishing third and second in his qualifiers. The opening laps of the 22-lap final were intense as Hibbert swapped positions between third and fifth. With a clear track, leader Robbie Malinoski pulled nearly a five-second lead over Hibbert. By finding creative lines Hibbert moved into second and eventually on the rear bumper of Malinoski.

The final laps brought the crowd to its feet as Hibbert and Malinoski raced within one-second of each other. On lap 18, they jumped the finish line tabletop side-by-side then Hibbert launched into corner one making a clean pass for the lead. Hibbert didn’t pull away until the final lap to take his 68th career win by 1.5 seconds.

Next up for Hibbert is the Eastern National in Farmington, N.Y. February 3-4. Catch each stop of the tour on NBC Sports select Sundays at 5 p.m. EST. To stay connected to Hibbert and his racing, log on to www.tucker-hibbert.com.

“It was a wild weekend of racing. The excitement level was high with the huge crowd. I’ve never seen Canterbury Park so packed. I could hear the fans cheering while I was racing. I had to fight hard for my 68th win. The track was rough and Robbie was riding strong. I’ll never forget it.

“I’m looking forward to this three-week break in the schedule to test and ride. I have no plans on slowing down and expect to be stronger than ever in New York.”