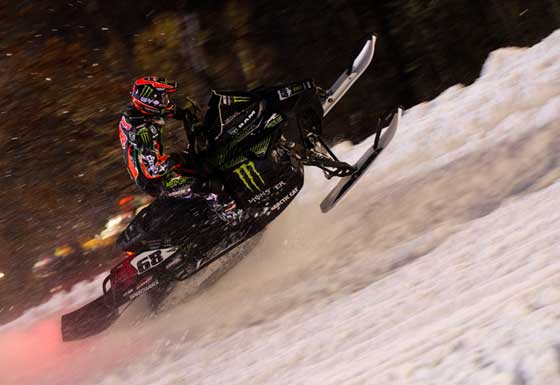 November 15, 2012 – Tucker Hibbert, the reigning snocross World Champion, enters his 13th professional season with a rock solid race program focused on breaking records. Hibbert plans to race a loaded schedule with events both in the US and overseas with a heavy emphasis on winning the first-ever gold medal six-peat at ESPN Winter X Games the end of January.

Monster Energy renewed its position as the title sponsor of Hibbert’s race efforts and Arctic Cat will continue to provide factory support with its second generation ProCross Sno Pro 600.

Hot Stuff Pizza, APV Synthetic Oil and TekVest are back after a successful first season with team Monster Energy/Arctic Cat.

Hibbert will kick-off his race schedule at the AMSOIL Championship Snocross season opener in Duluth, Minn. Nov. 23-25. The event will be streamed live on ustream.com and delay broadcast on CBS Sports.

“Racing is truly a team sport and everyone from the sponsors to the mechanics have to work together to make it a success. Being a team owner and racer is a lot of responsibility but I’m proud to know I have a true partnership with all the brands associated with my team. I can’t wait to put all our hard work to the test at the first race next weekend!”